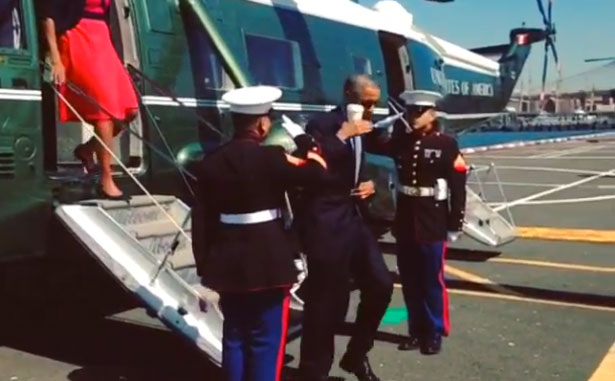 Fresh from finding yet another image proving that Obama hates America—the president gave a “latte salute” when he held a paper coffee cup while saluting two Marines yesterday (more on that raging scandal below)—Fox News has had to try hard to ignore the more hawkish Obama of the last few days. That’s the POTUS who’s been striking ISIS in Syria and who earlier today gave a robust speech at the UN calling for the world to fight terrorism.

The president, Bolton added, took the “opportunity to slam Israel.” (Maybe he meant Obama’s clear-eyed observation that “there’s a growing recognition within Israel that the occupation of the West Bank is tearing at the democratic fabric of the Jewish state.”)

Next up on Fox was Ric Grenell, who has worked for Bolton (and for Mitt Romney during the 2012 campaign, until the right freaked out that he’s gay). Grenell homed in on something Obama didn’t say: “He said ‘extremism,’ ‘violence, ‘violent extremism,’ ‘religiously motivated,’ but never ‘Islamic extremism.’” The uncoupling of those words is a paranoid sore point with the right because it fails to insinuate that extremism is built into Islam.

But for the right-wing media, perhaps more telling than Obama’s failure to hold “Islamic” next to “extremism” was his holding a cup as he saluted two Marines while disembarking from Marine One in New York City on Tuesday.

“This salute by Obama may serve as a useful metaphor for his entire administration: sloppy, ill thought out, inappropriate, callous, selfish, and disrespectful,” a Red State commenter wrote. “Though, in his defense, he may have been running from that thing covered in a red bag that seems to be pursuing him down the stairs.” The “thing” the writer was referring to is Michelle Obama, in a red dress, following the president off the plane.

Last night, a “shocked” Sean Hannity asked Karl Rove, “Would President Bush ever do that?” Karl didn’t answer—because Bush did do that. Not with a coffee cup but with a dog, when, holding tight onto Barney, he saluted service members at Andrews Air Force Base.

So Rove avoided the question by letting loose a string of adjectives about POTUS: “We’ve got a chai-swillin’, golf-playin’, basketball trash-talkin’, lead from behind, I’ve got no strategy, Osama bin Laden is dead/GM is alive, a community organizing commander-in-chief. How disrespectful was that?” (It’s not clear if Rove was referring to Obama or himself.)

Rove also seemed to think that “latte” might not be insulting enough. “It’s not a latte salute,” he said. “It’s a chai salute, because he drinks chai tea.” Of course, we don’t know what was in that cup. But “chai” sounds more exotic, foreign, and thus effete than even a French coffee.

A commenter on Free Republic one-upped Karl’s implication and got to the real point, writing: “It’s probably the gayest tea you could imagine like a chai latte. Might as well have been a pink cup.”