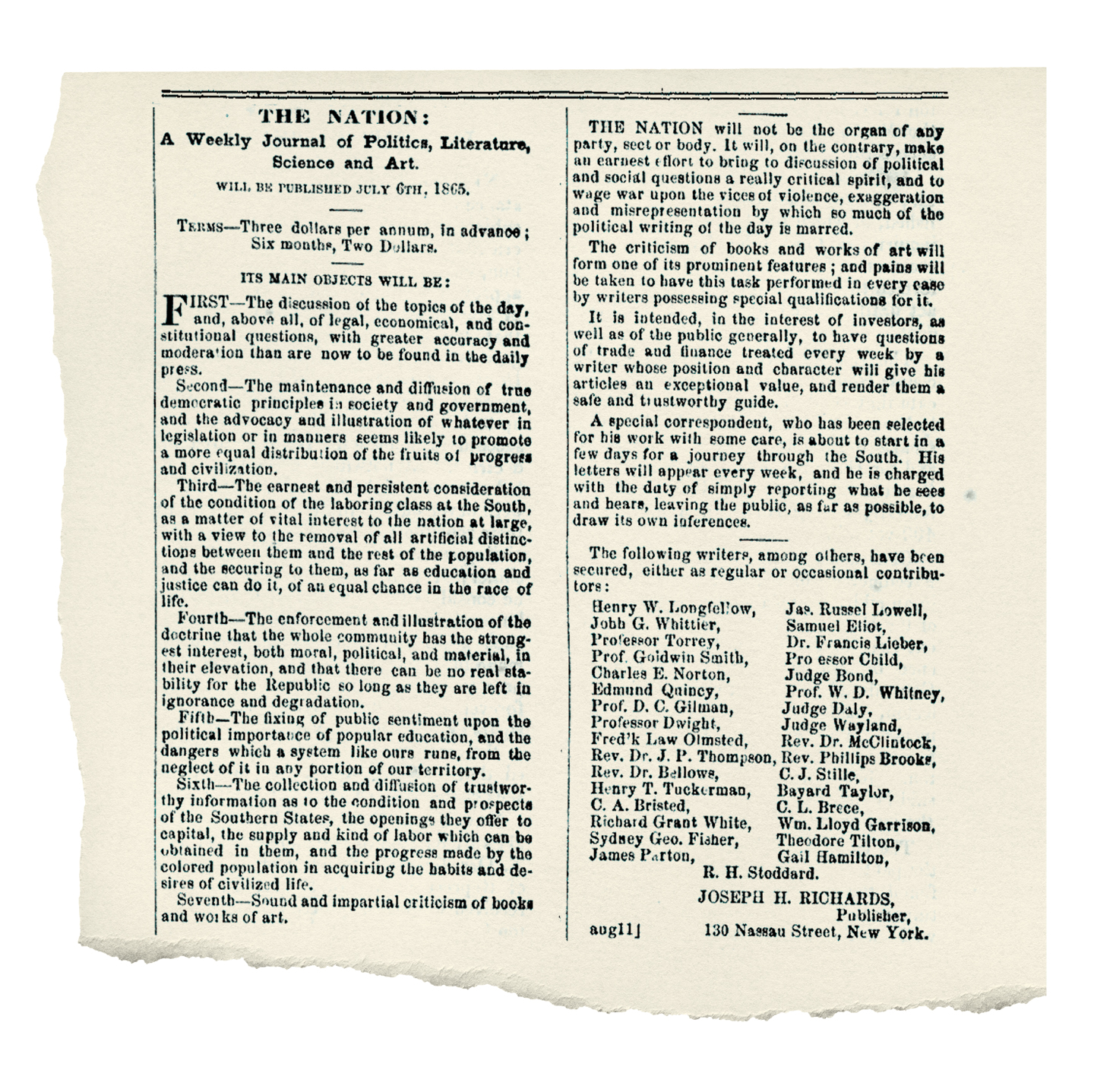 Copies of this mission statement were distributed to potential donors, subscribers and contributors before and shortly after The Nation’s first issue was published on July 6, 1865. This version appeared as an advertisement in The Elevator, a black newspaper in San Francisco.

A Weekly Journal of Politics, Literature, Science and Art.

ITS MAIN OBJECTS WILL BE:

FIRST—The discussion of the topics of the day, and, above all, of legal, economical, and constitutional questions, with greater accuracy and moderation than are now to be found in the daily press.

Second—The maintenance and diffusion of true democratic principles in society and government, and the advocacy and illustration of whatever in legislation or in manners seems likely to promote a more equal distribution of the fruits of progress and civilization.

Third—The earnest and persistent consideration of the condition of the laboring class at the South, as a matter of vital interest to the nation at large, with a view to the removal of all artificial distinctions between them and the rest of the population, and the securing to them, as far as education and justice can do it, of an equal chance in the race of life.

Fourth—The enforcement and illustration of the doctrine that the whole community has the strongest interest, both moral, political, and material, in their elevation, and that there can be no real stability for the Republic so long as they are left in ignorance and degradation.

Fifth—The fixing of public sentiment upon the political importance of popular education, and the dangers which a system like ours runs, from the neglect of it in any portion of our territory.

Sixth—The collection and diffusion of trustworthy information as to the condition and prospects of the Southern States, the openings they offer to capital, the supply and kind of labor which can be obtained in them, and the progress made by the colored population in acquiring the habits and desires of civilized life.

Seventh—Sound and impartial criticism of books and works of art.

THE NATION will not be the organ of any party, sect or body. It will, on the contrary, make an earnest effort to bring to discussion of political and social questions a really critical spirit, and to wage war upon the vices of violence, exaggeration and misrepresentation by which so much of the political writing of the day is marred.

The criticism of books and works of art will form one of its prominent features; and pains will be taken to have this task performed in every case by writers possessing special qualifications for it.

It is intended, in the interest of investors, as well as of the public generally, to have questions of trade and finance treated every week by a writer whose position and character will give his articles an exceptional value, and render them a safe and trustworthy guide.

A special correspondent, who has been selected for his work with some care, is about to start in a few days for a journey through the South. His letters will appear every week, and he is charged with the duty of simply reporting what he sees and hears, leaving the public, as far as possible, to draw its own inferences.