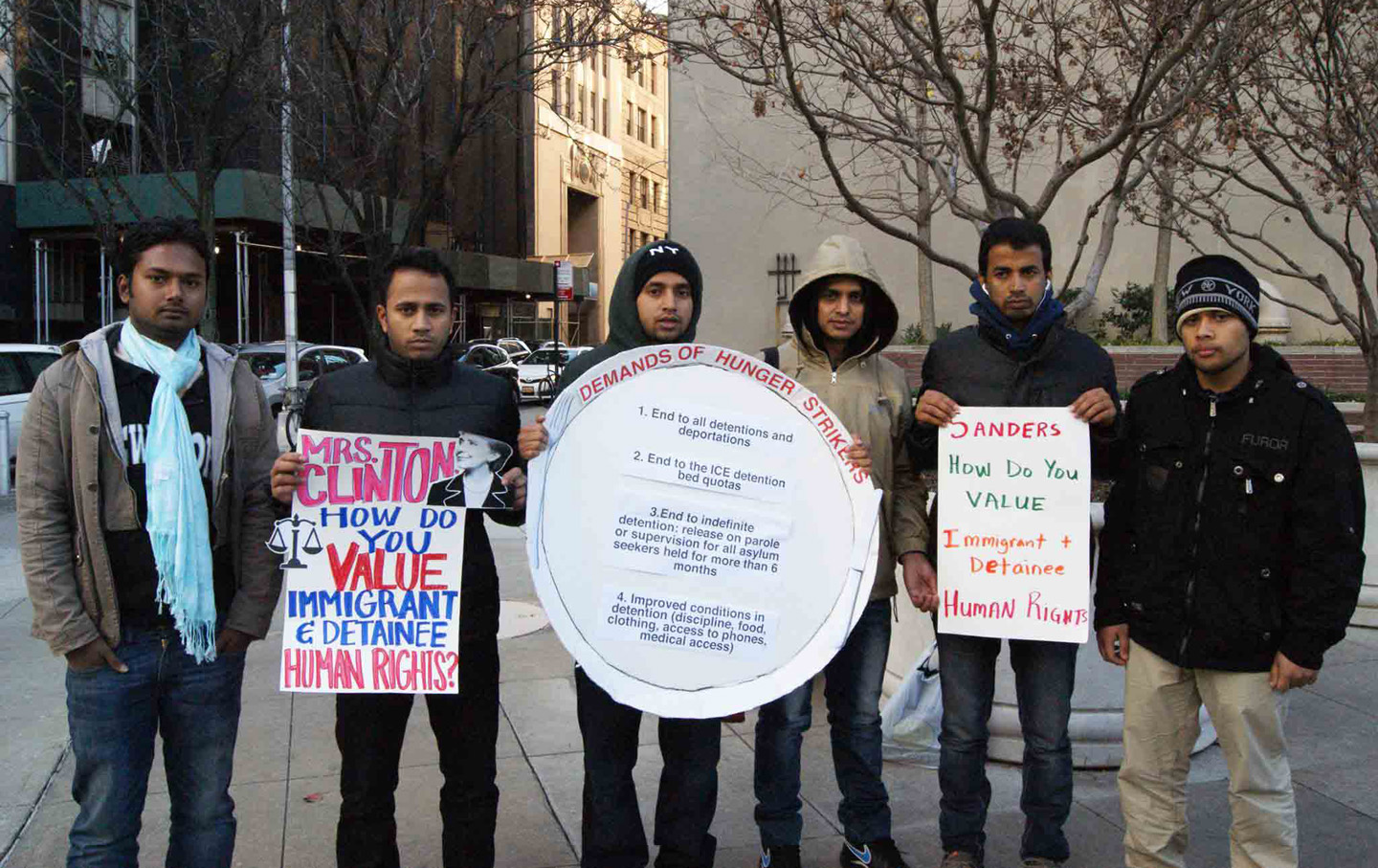 In response to Donald Trump’s vitriolic anti-immigrant spew, many politicians have condemned his rhetoric as “un-American,” arguing that his bigotry flouts a supposed national tradition of welcoming refugees. Trump’s bombast, however, merely amplifies an existing constitutional crisis in the immigration system, where detained migrants are already experiencing a version of Trump’s America.

Across the country, asylum seekers have been locked up indefinitely in legal purgatory, denied a fair legal review, and isolated from their communities. They’re now rising up in a tide of civil disobedience that has rippled across seven detention facilities nationwide. According to the main coordinating groups, Desis Rising Up and Moving (DRUM) and #NotOneMore Deportation, the campaign, launched on the eve of Thanksgiving Day and dubbed #Freedomgiving, has galvanized detainees from Latin America, South Asia, and West Africa, some of whom have spent months in custody. Starting from an initial 110 strikers, the action expanded to 150 detainees within days. As of Thursday, DRUM reports, “39 are continuing the strike at Krome (Florida), South Texas, and Aurora [Colorado] facilities at last count.” Many have reportedly resumed eating under pressure from authorities; others have gotten assurances that their pending release on parole would be honored. DRUM claims Immigration and Customs Enforcement (ICE) has subjected detainees to inhumane treatment and retaliation, including restricting access to communications, failing to provide adequate medical care, forced feeding, and placing several detainees temporarily in solitary confinement.

Shohel Khalashi, a detainee at the Otay Mesa facility in California, who claimed his parole had been unjustly revoked, suffered stomach pains after three days of refusing food and was sent to a medical facility to undergo heart surgery. Later, in an anxious call to DRUM, he said in Bangla, “They have locked me in separate room. I still did not eat yet. Maybe I will die. I have no words to explain my condition. ICE came today and I told them to release me or I will die here.”

Meanwhile, ICE has barreled forward with the deportation orders against a core group of Bangladeshi asylum seekers, who went on hunger strike in mid-October at the El Paso detention facility. According to DRUM, about 23 of them remain detained, most with final deportation orders. ICE recently tried to deport four detainees but, according to the account of ICE, when they were about to be placed on a deportation flight back to Bangladesh, three of them “actively resisted the removal process.” After they “physically refused to board their flights,” ICE stated, “they were returned to custody.”

In a statement to The Nation, ICE spokesperson Bryan Cox argued that ICE upholds “a strict zero tolerance policy for any kind of abusive or inappropriate behavior in its facilities.” According to ICE, facilities where strikes have occurred are tightly monitored and internal investigations have shown the detainees’ complaints to be “without merit.”

But the wave of upheaval among frustrated detainees, from refusing meals to bodily resistance, highlights the desperation experienced by migrants who have come to plead for nothing more than humanitarian sanctuary.

While conservative politicians have sparked outrage calling for “banning Muslims” or blocking Syrian refugees from the country, the Bangladeshi asylum seekers have already been hit by sweeping counterterrorism-related immigration restrictions. The Department of Homeland Security has deemed their political party, the main opposition Bangladesh National Party (BNP), a “Tier III” terrorist group due to “affiliation with Islamic Extremist groups”—though rights groups have strongly refuted this designation. By contrast, they claim their political affiliation with the BNP has made them targets of political persecution in Bangladesh’s ongoing maelstrom of factional conflict, and that repatriation could lead to torture or death.

Although most of the asylum seekers passed preliminary “credible fear” screenings upon arriving across the Mexican border, they may never get a fair hearing in court; in addition to the blanket terrorism designation, most say they have lacked adequate legal representation and in some cases were denied competent interpreters. DRUM Executive Director Fahd Ahmed reports via e-mail that incarceration itself hampered their initial asylum bids: “Since it is nearly impossible to mount a case while detained (gathering evidence, finding able lawyers who know language and country conditions, etc), all lost their cases.”

While their legal prospects are withering, their plea for relief has edged onto the campaign trail. Through a nationwide pressure campaign, DRUM and #Not1More recently got a boost from the campaigns of Democratic presidential candidates O’Malley and Sanders, which issued statements expressing support for the detainees, and Clinton, which expressed general concern and criticisms about the detention system.

In a press briefing on Monday, Bernie Sanders specifically denounced the privately run detention centers used to house asylum seekers, remarking that “the more people who are in prison, the more money they make.”

But the dysfunctional detention apparatus is just the sharp edge of an legal regime insidiously distorted by the post-9/11 security state. The legal barriers facing Bangladeshi political refugees parallel the long-term erosion of the civil rights of Muslim Americans under the pretext of the “War on Terror.”

In a recent letter to members of Congress, Asian Americans Advancing Justice argued that the blanket denial of asylum claims related to the BNP exemplifies “overreaching government policies that rely on the pretext of national security to unfairly target the communities we serve,” and “is a prime example of why we must question a rush to judgment that entire refugee populations are somehow suspect as terrorist threats.” Noting that the same racist sentiment is driving the efforts to bar Syrian refugees, the civil-rights group warned, “Our existing immigration laws related to terrorism are overly broad and unfairly deny relief to many otherwise eligible individuals seeking shelter…. we should not let fear and prejudice guide our decisions about whom to welcome to America.”

Just as Trump’s harangues are a flamboyant inflection of a deep-rooted American reaction, the #Freedomgiving activists represent just the tip of the so-called War on Terror’s collateral damage. While the phalanx of racist demagoguery grows louder on the campaign trail, the muted cries of hunger strikers in detention attest to the hollowness of America’s image as a refuge for the world’s downtrodden: Their quest for sanctuary has been betrayed in the name of “security.”