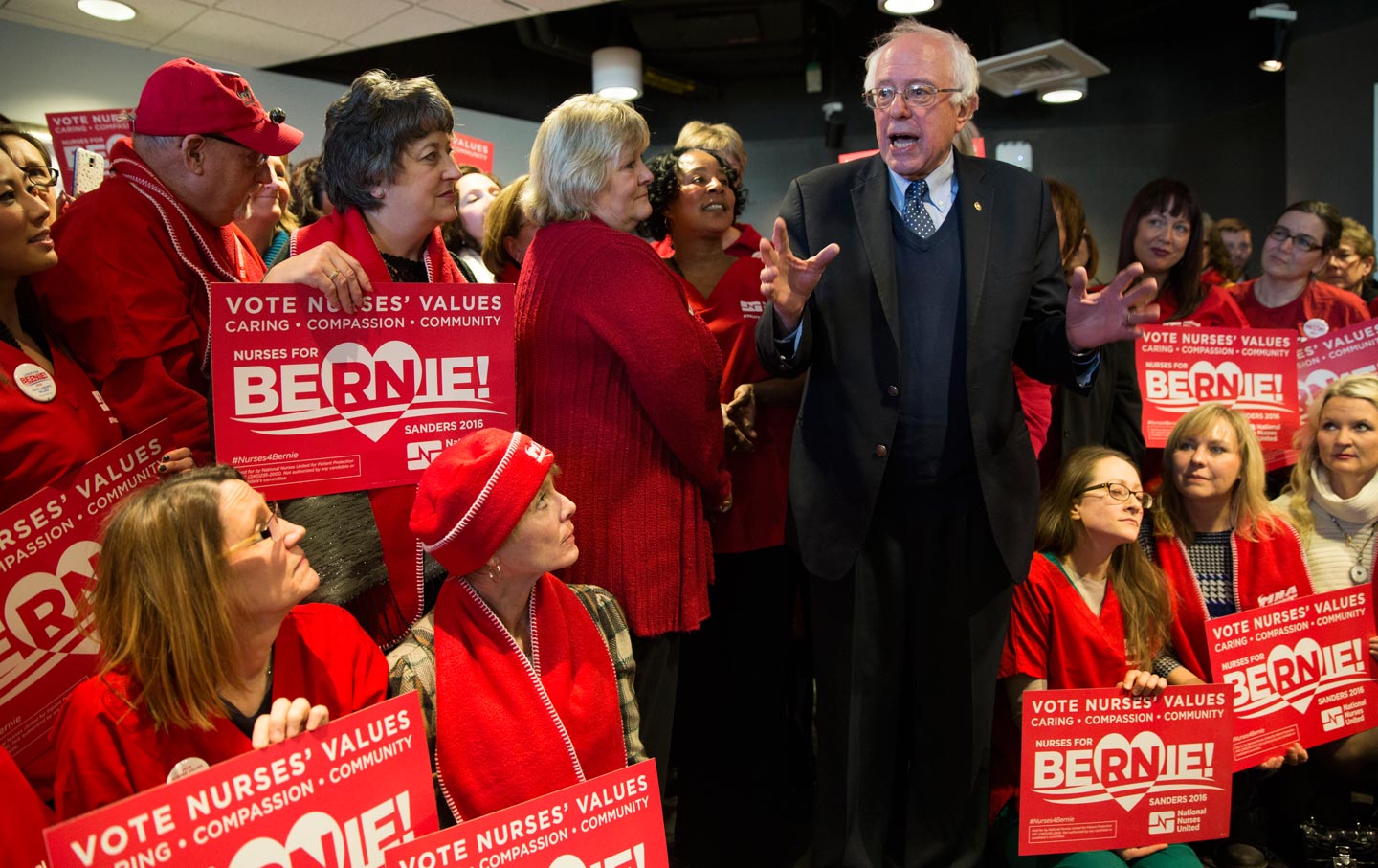 Bernie Sanders concluded his speech on the last of 2016’s many Super Tuesdays by declaring: “The struggle continues!”

Thousands of cheering supporters gathered in Santa Monica cheered as if the Democratic presidential contender had just swept another round of primaries.

But that was not the case. Sanders had plenty to celebrate: As of Tuesday night, he had won more than 12 million votes, 23 primaries and caucuses, and 1,844 delegates on a political quest that he noted had begun as what political and media elites “considered to be a fringe campaign.” The Sanders campaign changed the calculus of Democratic Party leaders who had imagined that the contest for their party’s nomination would be a mild affair culminating in the easy nomination of front-runner Hillary Clinton. Instead, Clinton and Sanders battled into the beginning of June. But, as the results from the last major round of primaries poured in, Clinton was scoring critical wins in California, New Jersey, and other states.

Joking that he was “pretty good in arithmetic,” Sanders acknowledged the results, which had positioned Clinton (with her lead among elected delegates and overwhelming support from superdelegates) to claim a historic victory at a rally in Brooklyn. The senator mentioned a gracious conversation with the former secretary of state and noted that he would be meeting with President Obama at the White House on Thursday.

For Sanders supporters, the platform drafting committee hearings that began this week in Washington is are big deal.

Yet he was still talking about struggle. Anyone who knows anything about Bernie Sanders understands why. For Sanders, electoral politics has always been an extension of movement politics. That was clear Thursday, after Sanders met with the president for more than an hour (prior to Obama’s Thursday afternoon endorsement of Clinton). Speaking in front of the White House after the meeting, Sanders said he would soon be talking with Clinton about how “to make sure that Donald Trump does not become president of the United States.” But the senator was not making an endorsement just yet; he spoke of finishing the primary campaign in the District of Columbia, which votes Tuesday. He also spoke about the need to assure that the Democratic Party recognizes and advances an agenda that have been the focus of “the struggle” for economic and social justice that Sanders has engaged in for decades: higher wages for workers, accountability for Wall Streets, guaranteed access to higher education and health care, investment in communities that have been left behind by bad trade deals and insufficient investment in infrastructure.

The senator sees the political side of “the struggle” in context. Few prominent figures have won and lost as many times as Sanders. He is a former mayor and a veteran member of Congress. But he lost races for the the US Senate, the US House, and Vermont’s governorship before getting to Washington. Sanders sees the political process as an ongoing struggle to advance a progressive vision for America that picks up where Franklin Roosevelt’s New Deal left off. He is a democratic socialist who calls for “a political revolution,” and he is realistic about what that entails.

So, it should be noted, are his issue-focused supporters. They recognize the “very, very steep fight” that Sanders describes. They know why they have waged it, and they know why they will continue to wage it—with a sense of urgency and necessity. They believe, as Sanders does, that the winning politics for Democrats this fall will be a politics that aims high. They recognize that Clinton has embraced proposals Sanders advanced—to such an extent that The Wall Street Journal headlined an analysis of Clinton’s wins: “Party Shift Left Pulls Candidate With It.” And they intend to keep pulling.

For many Sanders supporters, the platform-drafting committee hearings that began this week in Washington are important. The same political and media elites that once dismissed the Sanders candidacy often dismiss the platform process as a footnote to the presidential race. The reality is that the drafting committee is engaged in serious deliberations that on Wednesday featured substantial testimony on everything from Islamophobia to indigenous rights to food sovereignty. The document as it is drafted and eventually accepted by the Democratic National Convention will tell us a good deal about where the party stands. And that counts for a lot with voters who are motivated less by personalities than by ideals. The chairman of the drafting committee, Maryland Congressman Elijah Cummings, says he wants the committee to write a “higher ground” document that establishes “a the vision of our Party—and our nation’s future.”

Along with Clinton backers and activist groups, Sanders supporters are weighing in with regard to that vision—offering proposals on everything from military spending to fracking to fundamental campaign finance reform and Middle East peace. They want a drafting committee made up of progressives, some aligned with either campaign and others unaligned, to produce what Sanders suggests can be “the strongest progressive agenda that any political party has ever seen.”

On the morning after the California primary, National Nurses United (a union that provided Sanders with critical support nationally and in California) was tweeting #TheStruggleContinues! alerts about a petition urging platform drafters to include a commitment to a single-payer “Medicare for All” healthcare system in the document. Clinton and Sanders wrangled over healthcare issues during the course of the primary campaign, with the front-runner arguing that efforts to move toward a Medicare for All system might imperil reforms contained in the Affordable Care Act. Sanders countered that, as a senator who supported the ACA, he wanted see more progress toward guaranteeing access to affordable care for all Americans.

The NNU petition picks up on that theme. It makes no mention of candidates and, instead, frames out an argument for bold action that polls well and that is supported by organized labor—a key constituency for Democrats:

Given the fact that the US spends 2.5 times the average of other industrialized countries, yet we don’t provide healthcare to everyone; and that Medical outcomes such as infant mortality and life expectancy, and equality of access, are much better in other countries; and that 58 percent of all Americans support Medicare for All, including 81 percent of Democrats, we hereby call upon the Democratic Party to adopt into the Platform of the Democratic Party the following language from the AFL-CIO resolution on healthcare adopted at their most recent convention:
“While making various changes would improve the ACA, the social insurance model, single-payer system, is our goal, and we will continue to fight for it. Health care is a fundamental human right and an important measure of social justice. Achieving universal health care will not come from mandating everyone to buy a health insurance policy from a private insurance company. Instead, we must build on the experience of Medicare, which shows that the most cost-effective and equitable way to provide quality care is through a single-payer system. ‘Medicare for all’ would require updating and expanding the program’s benefits to fit the working population and children, as well as negotiating prices with physicians, providers, and with Pharmaceutical companies for medications that working families—and the country—can afford. Until we achieve a single-payer model at the national level states should be allowed to implement universal, publicly financed health care coverage on their own so long as that coverage is affordable and provides a full range of benefits, commensurate with the requirements that apply to all states under the ACA.”

That’s a practical proposal, which has gained support from HealthCare-Now!, the Campaign for a Healthy California, the Labor Campaign for Single Payer, and Progressive Democrats of America. It will stir debate, and undoubtedly meet with some disagreement. But it does something else: It puts aside personalities and gets to the question of what the party should stand for as Democrats prepare not merely to do political battle against Donald Trump but to define a vision that will excite and engage voters who hunger for progressive change.