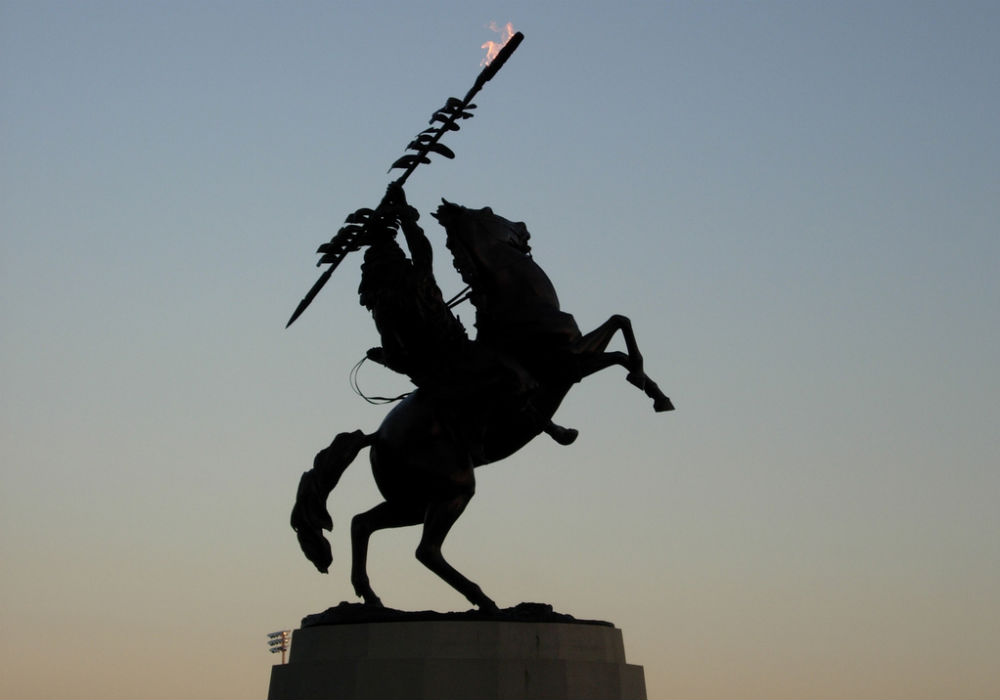 It’s easy to oppose the name of the Washington Redskins and call for owner Dan Snyder to change his beloved bigoted brand. After all, it’s a dictionary-defined slur bestowed on the NFL franchise by their arch-segregationist, minstrel-loving founder. When you have Native American organizations, leading sportswriters, Republicans as well as Democrats in Congress and even the president say the time has come to change the name, it is not exactly difficult to get on board.

But what about the Florida State Seminoles, whose football team on Monday night won the Vizio/Dow Chemical/Blackwater/Vivid Video BCS National Championship Game? The NCAA, since 2005, has had formal restrictions against naming teams after Native American tribes, and yet there were the Seminole faithful: thousands of overwhelmingly Caucasian fans with feathers in their hair, doing the Tomahawk chop and whooping war chants on national television. Their passions were stirred into a frenzy by a white person, face smeared with war paint, dressed as the legendary chief Osceola riding out on a horse. As Stewart Mandel of Sports Illustrated gushed, “Chief Osceola plants the flaming spear in the Rose Bowl. Awesome.” (Osceola was adopted after the school quietly retired their previous Native American mascot “Sammy Seminole.”)

I have been to dozens of Redskins game and have never seen anything close to this kind of mass interactive minstrelsy. Yet there are no protests against this spectacle, no angry editorials and no politicians jumping on the issue. Why is that? Because as any Florida State fanatic will shout at you, the university has “a formal agreement with Seminole Nation” and that makes everything all right. Fans treat this much-touted agreement like they have a “racism amnesty card” in their back pocket. The approval of the Seminole Nation, they will tell you makes it all A-okay. Actually it doesn’t. It doesn’t first and foremost because the existence of this “agreement with the Seminole Nation” is a myth.

The agreement is with the Florida Seminole Tribal Council and not the Seminole Nation. The majority of Seminoles don’t even live in Florida. They live in Oklahoma, one of the fruits of the Seminole Wars, the Indian Removal Act and The Trail of Tears. These Oklahoma Seminoles—who, remember, are the majority—oppose the name. On October 26, 2013, the Seminole Nation of Oklahoma’s governing body passed a resolution that read in part, “The Seminole Nation condemns the use of all American Indian sports team mascots in the public school system, by college and university level and by professional teams.”

As for the Florida Seminole Tribal Council, it is the owner of a series of luxury casino hotels throughout the state where the Seminole “brand” is prominently on display. The Tribal Council also bought the Hard Rock Cafe for $965 million in cash in 2006,  which thanks to the Seminoles’ “first-nation status” now also offers gambling in its Florida locales. Hard Rock corporate called this “the perfect marriage of two kindred spirits.” Seminole Nation Hard Rock Hotel and Casino T-shirts are available for purchase.

For the wealthy and powerful Florida Seminole tribal leaders, the cultural elevation of the football program is a part of their extremely lucrative gaming operation. Defending the school’s use of the name is about defending its brand. That is why the chairman of the Florida Seminole Tribe of Florida, James Billie, said, “Anybody come here into Florida trying to tell us to change the name, they better go someplace else, because we’re not changing the name.”

Some might say that this is fine with them. After all, given the incalculable wealth stolen from Native American tribes over the centuries, what is wrong with them getting some of it back? That would be fine, except for the stubborn fact that gambling wealth flows into very few hands. The majority of Native Americans languish in dire poverty, with reservation poverty listed at 50 percent in the last census.

Another argument for the Florida State Seminoles’ keeping their name is that it actually educates people and keeps the history from being eradicated. This is self-serving codswallop, like saying a Muhammad Ali mousepad teaches people about his resistance to the war in Vietnam. Branding and cultural appropriation is not history. It’s anti-history. Take school mascot Chief Osceola as an example. If people in the stands and at home actually knew who Osceola was, the ritual of his riding a horse and throwing a spear before games would be an outrage, and not just because the Seminoles, who lived and fought in swampy everglades, tended not to ride horses. Chief Osceola was a great resistance fighter and leader of the Second Seminole War in Florida.

As written in the terrific book 101 Changemakers: Rebels and Radicals who Changes US History, “Osceola became an international symbol of the Seminole Nation’s refusal to surrender. He was a renowned public speaker and a fierce fighter who was also an opponent of the US slave system. One of his two wives was a woman of African descent and it was not uncommon for escaped slaves to become a part of Seminole Nation. Osceola’s army frustrated the entire US Government, five separate Army generals, at a cost to the US Treasury of more than 20 million dollars…. On October 21, 1837, Osceola met with US government officials to discuss a peace treaty. When he arrived, he was captured and imprisoned. Osceola’s respect was so widespread that this maneuver was widely condemned and viewed as a dishonorable way to bring down the great warrior.”

Osceola was nothing less than the American Mandela, but a Nelson Mandela who did not survive Robben Island. Imagine before a South African soccer game, a white person in black face, dressed like Mandela, running out to midfield to psyche up the crowd. Not even Rick Reilly would say that this was somehow educating people about African resistance to apartheid. No one is getting educated about Osceola or the Seminole Wars. Instead their heroic resistance has been translated for football purposes to being “tough.” This “respect” for their toughness not only reduces a rich and varied Seminole culture to a savage culture of war, it is also an unspoken way to to praise our own ability to engineer their conquest.

The last argument, which is perhaps the most common, is, “Changing the name of the Redskins the Seminoles… where does the politically correct madness end? Do we stop using ‘Giants’ because it offends tall people? Or ‘Cowboys’ because it offends cowboys?” This kind of witticism is actually profoundly insulting because there was this thing called “history” that happened, and in this “history” giants were not subject to mass displacement and genocide. Once 100 percent of this country, Native Americans are now 0.9 percent, and we play sports on their graves. Their rituals and dress are our own commercialized entertainment. We turn our eyes to the field and away from the way institutionalized racism continues to define the lives of the overwhelming majority to Native Americans who do not own a stake in the Hard Rock Cafe. That gets us to the final problem with Seminole nation and all Native American mascoting. It makes us more ignorant about our own collective history. I’m not sure we can afford it.