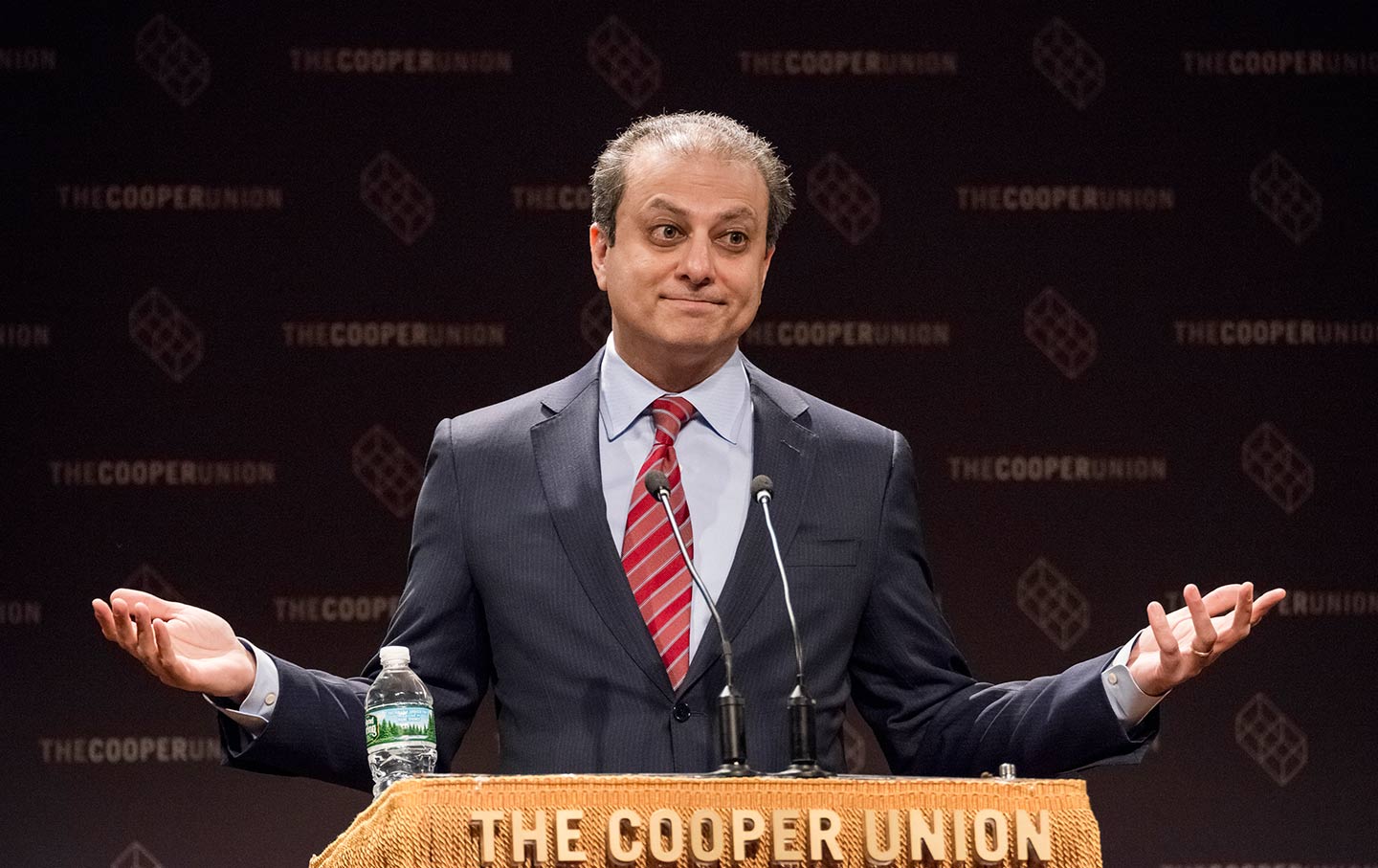 Once upon a time, Preet Bharara, the former US Attorney for the Southern District of New York, wanted to follow in the professional footsteps of Rod Rosenstein, the embattled deputy attorney general. Before he started his current job last year, Rosenstein was the US Attorney for the District of Maryland. He had been appointed by President George W. Bush, and then reappointed to the position by President Barack Obama.

That’s the same neat trick that Bharara was also hoping to pull off. Appointed by Obama in 2009, Bharara just wanted to keep his job under the new president, Donald Trump. Bharara came close to getting his wish. Prior to his inauguration, Trump conveyed to Bharara—through Senator Chuck Schumer—that he could remain the US Attorney for the Southern District of New York. Bharara was both “surprised” and “flattered,” he later said, by his good fortune. But two months into his presidency, Trump had a change of heart. His efforts to jolly Bharara, who had prosecutorial jurisdiction over many parts of Trump’s business empire, into some sort of informal friendship weren’t working. On March 11, 2017, along with 45 other US Attorneys, Bharara was asked to resign.

At first, Bharara thought maybe a mistake had been made, since Trump had asked him to stay on; he didn’t submit his letter of resignation. “He had asked me to stay,” he said. “He should ask me to go.” And that’s exactly what Trump did. He fired Bharara. “I did not resign,” Bharara tweeted. “Moments ago I was fired.” He finished the Vietnamese spring rolls he had ordered for lunch that day and walked out of his Saint Andrews Plaza eighth-floor office for good.

And thus was born the powerful myth of Preet Bharara, martyred US Attorney. He is more in demand, and more accessible than ever before (although he did not respond to my request for an interview). He is writing a book, to be published next year by Knopf, about the “search for justice.” Taking a page, no doubt, from former FBI director James Comey’s playbook, he has said his book would be about “integrity, leadership, decision making and moral reasoning.” Bharara is a distinguished scholar in residence at New York University School of Law. His weekly podcast, Stay Tuned, is the most popular in New York State, according to SimpleTexting, and he has interviewed guests such as Leon Panetta, Bill Browder, and Maggie Haberman. He has a gig at CNN as a senior legal analyst. He’s a prodigious tweeter—often with an air of moral superiority—to his 817,000 followers, up from around 6,000 when we last spoke, in 2015. His pinned tweet: “Citizens working together are more powerful than US Attorneys. And presidents.” His business venture CAFE, started in conjunction with Some Spider Studios (a media company co-founded by Bharara’s brother, Vinit, who sold his online company to Amazon for around $545 million), includes his podcast as well as the CAFE Change Summit, a daylong conference held in April that brought together aspiring young “change-makers” with an older group of people who have already made it. In June, he gave the commencement address at the St. John’s University School of Law. 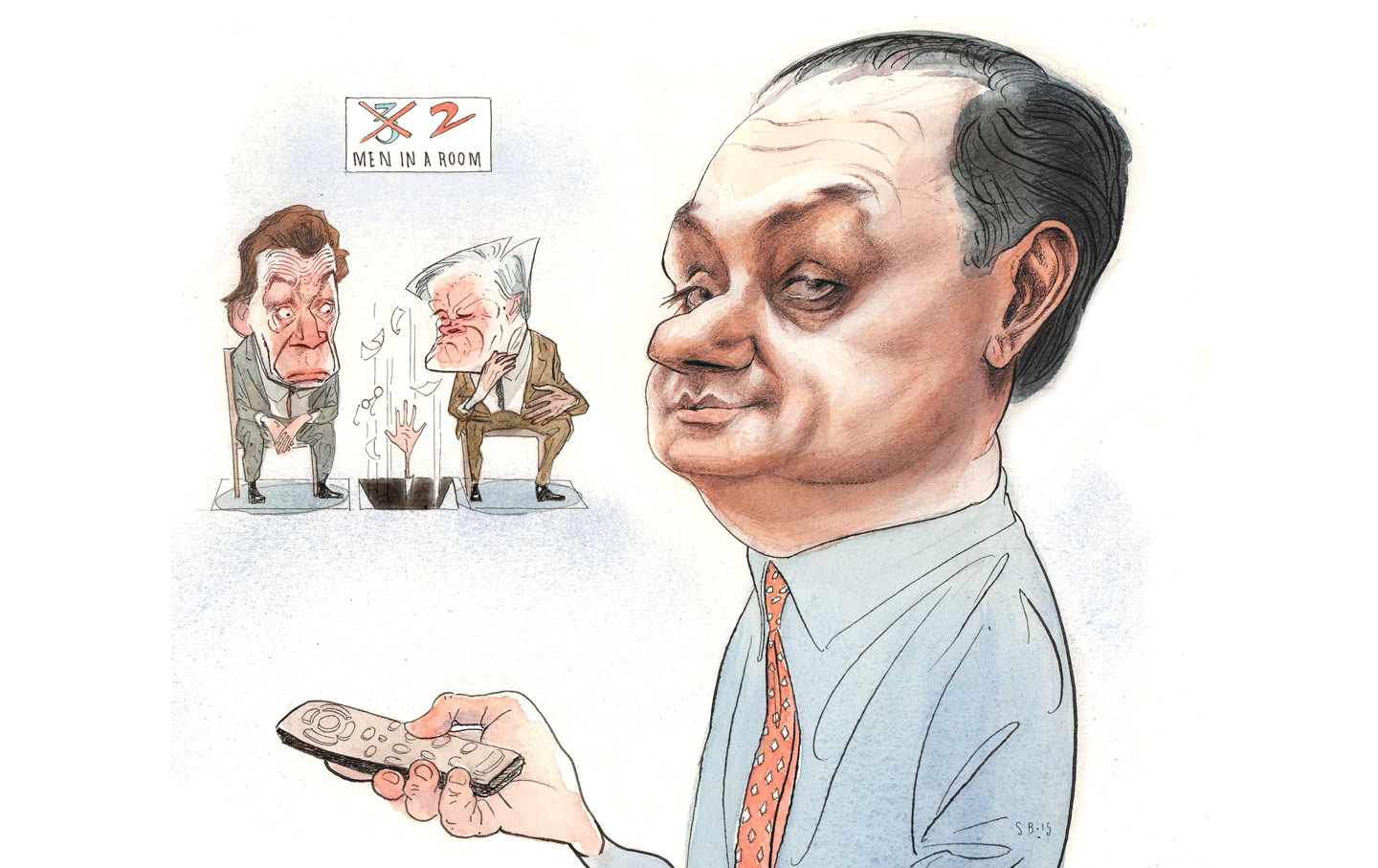 And in the wake of New York State Attorney General Eric Schneiderman’s shocking resignation, in May, as a result of allegations in The New Yorker about his physical abuse of several women, Bharara also emerged, briefly, as a possible favorite to replace him, if he were interested. The Wall Street Journal suggested that Bharara was “one big name” that could “shake up” the race, while pollster Steven Greenberg called him the “ultimate wild card.” But he remains ambivalent about the job, and decidedly unannounced. “It’s flattering,” Bharara told CNN about being mentioned for the job. “…I’m happy doing what I’m doing now.” With the primary election just two months away, these are not the sound-bites of a candidate.

In the meantime, others, such as Zephyr Teachout, the Fordham law professor who gave Governor Andrew Cuomo a run for his money in the statewide Democratic primary in 2014; Letitia James, the New York City public advocate, whom Cuomo has endorsed for the job; and Leecia Eve, a former top aide to both Hillary Clinton and Cuomo, have entered the race for the November election, and are campaigning hard for it.

But quite apart from the race to replace Schneiderman, the question still looms large as to whether the legend of Bharara is deserved. He has been strutting through the Trump era as some sort of Mr. Accountability. But is he morally justified in doing so? He certainly had his share of victories as US Attorney for the Southern District. There were his successful prosecutions of Albany corruption—taking down Sheldon Silver, the Assembly speaker, and Dean Skelos, the Senate majority leader. He was rightly outraged when Cuomo abruptly shut down the Moreland Commission, which was investigating Cuomo’s bad behavior. There was the successful prosecution of the Times Square bomber and other terrorists. There was his impressive (and nearly perfect) record of prosecuting insider-trading on Wall Street, until, some believe, he started getting cocky and overreaching. In a serious blow to his prosecutorial record, in 2014, the US Court of Appeals for the Second Circuit overturned the convictions of hedge-funders Todd Newman and Anthony Chiasson.

But the glaring omission from this impressive list of successes has been his abject failure to prosecute any Wall Street bankers, traders, or executives for their roles in exacerbating the 2008 financial crisis in fraudulent ways. There was plenty of evidence—e-mails, documents, reports from bankers to the legal authorities—that some on Wall Street knowingly packaged up into securities billions of dollars of mortgages that did not meet the underwriting standards at various big banks, including Citigroup and JPMorgan Chase, and sold them off as supposedly money-good securities all over the world.

Such prosecutions are usually the preserve of the Southern District of New York. But Bharara abdicated that responsibility during his nearly eight years in office, despite having his face slapped on the cover of Time magazine, in 2012, with the headline, “This Man Is Busting Wall St.” He has never given a good explanation for his sins of omission, other than the bland defense that he would have brought prosecutions if he could have brought them. He has seen the evidence, his argument goes, and the rest of us have not. So back off.

“When it comes to prosecuting Wall Street and large corporations, they ‘chickenshitted out,’ to coin a phrase.” —Jesse Eisinger, author of ‘The Chickenshit Club’

His critics have noticed. Jesse Eisinger, author of the 2017 book The Chickenshit Club: Why the Justice Department Fails to Prosecute Executives, tries to answer the still-burning question as to why Obama’s Justice Department, led mostly by Eric Holder, the former Attorney General, failed to prosecute Wall Street wrongdoing that occurred in the years leading up to the financial crisis. Eisenger gives Bharara credit for being a good boss, for going after corruption in Albany, and for cleaning up the “little corner” of finance known as insider trading. “But it is an utter myth that he has managed to ride that he did anything about Wall Street,” he said. “The insider-trading cases are a side note. It’s a misdemeanor crime. It’s a secondary issue. It doesn’t have anything to do with systemic corruption of the banks, and when it comes to prosecuting Wall Street and large corporations, they ‘chickenshitted out,’ to coin a phrase. They barely did it.” He said Bharara made a priority of prosecuting insider trading, not Wall Street corruption leading up to the financial crisis. “They barely gave resources to it,” he said. “No single prosecutor had sole responsibility for any of the cases, so whenever a prosecutor was looking at Lehman Brothers, they were looking at four or five other cases, including insider-trading cases, which were obviously the office’s priority. So what would you work on? Would you work on the difficult thing that no one seemed to be encouraging, or would you work on the thing that was going to give you the front-page stipple portrait in The Wall Street Journal and bring glory to your boss?”

In the years leading up to the financial crisis, Richard Bowen, a former senior mortgage underwriter at Citigroup, saw wrongdoing in his business unit—the bank’s underwriting standards were being routinely ignored—and he blew the whistle on it, first with his bosses and then with the legal authorities. He was fired, of course, and his warnings were ignored at the highest levels of the bank, including by Robert Rubin, the former Treasury secretary who was then in Citigroup’s office of the chairman. Bowen testified before the Financial Crisis Inquiry Commission, and he told his story on 60 Minutes. In October 2011, Bowen met in Dallas with two assistant US Attorneys from Bharara’s office who had flown down to see him. “We talked,” he said. “I visited with them for a whole day about all the shit that had gone on.”

But nothing ever came of the wrongdoing Bowen had witnessed and shared with Bharara’s assistants. He’s no fan of Bharara. “He has done whatever would give him publicity, without actually having to prosecute anyone,” he said of the wrongdoing on Wall Street. Bowen worries about the bad precedent that has been set as a result. “There are no consequences for the wrongdoing,” he continued. “There is no downside for anyone doing this again, and the entire DOJ has shown that. So from that standpoint, I think Preet has been in line with the DOJ. They collect the big fines, but that was only for the publicity. It was a get-out-of-jail-free card, which they granted.” Bowen is but one of many Wall Street whistle-blowers Bharara ignored. “Bharara knew how to drain the Wall Street swamp,” Bill Black, an associate professor of economics and law at the University of Missouri–Kansas City, wrote on the Naked Capitalism blog in March 2017. “He had the facts, the staff, and the jurisdiction to drain the Wall Street swamp. Bharara refused to do so.”

Eisinger, for one, believes that Bharara’s hands-off approach to Wall Street prosecutions has had serious political consequences. “I would start it with a T and end it with a P,” he said. “I think that the American public is furious and they lashed out, and I think they also see that Wall Street blew up the global economy and there was no accountability, and I think that makes them furious. It’s very easy to see there’s no accountability.”

On the first podcast of Stay Tuned, last September, Bharara explained why he didn’t resign when he had been asked to do so in March 2017 by Dana Boente, then the acting deputy attorney general, and why he wanted Trump to fire him instead. He said he had “lived long enough to know” that it was important for the “record to be clear for posterity.” But what about Bharara’s failure to prosecute Wall Street wrongdoing? Where does that stand “for posterity”? That’s a question he’s never been willing to answer forthrightly. Which raises another one: Why exactly are we lionizing Preet Bharara?