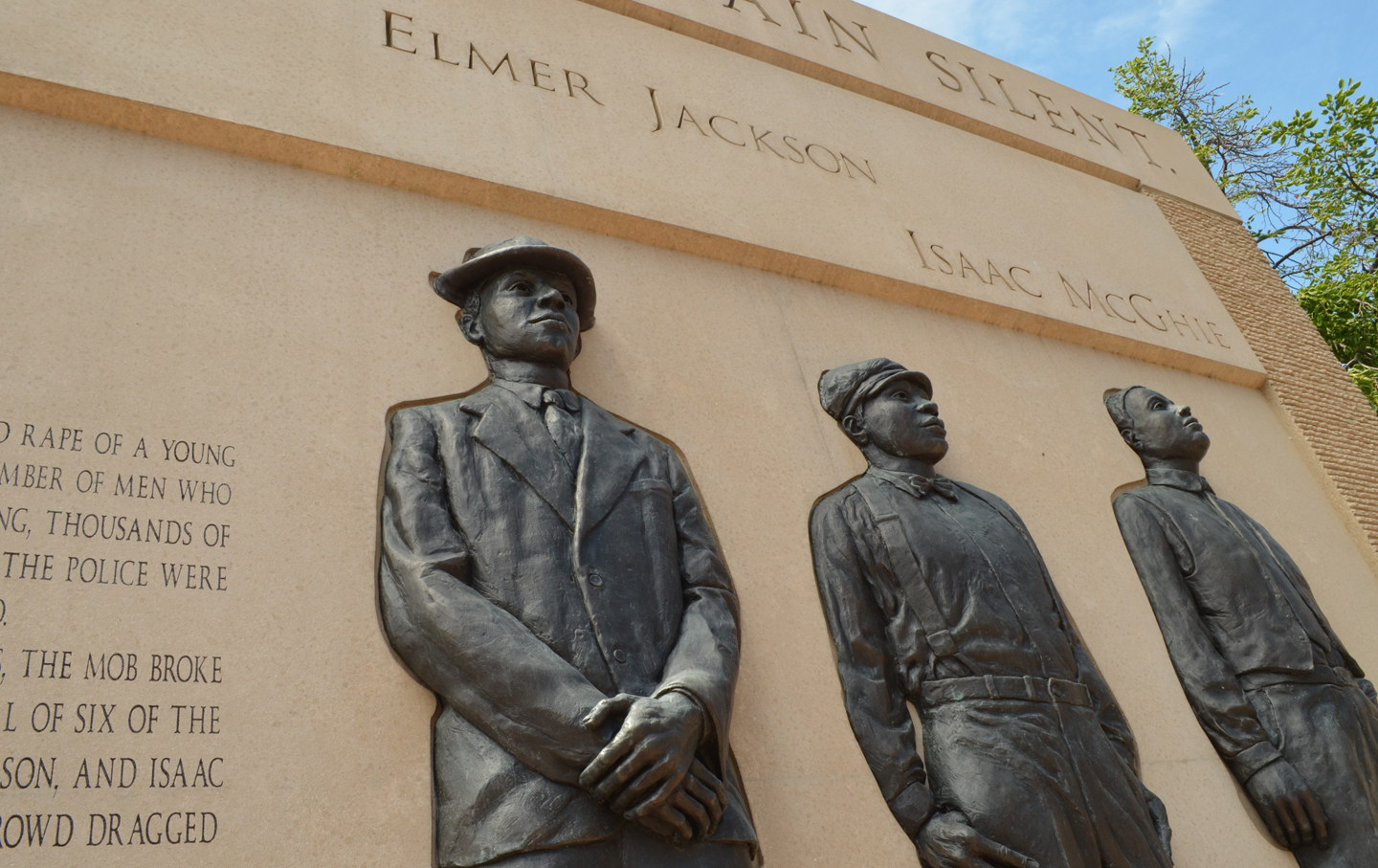 A memorial to the 1920 lynching of Elias Clayton, Elmer Jackson and Isaac McGhie, in Duluth, Minnesota (artstuffmatters / CC BY-NC-ND 2.0)

The planet is aflame with the killing of messengers. We can barely keep score of the assaults on memory: from Mosul to Moscow to Dresden to Dhaka, the destruction proceeds apace—of ancient monuments, scientific archives and schools, of journalists as well as journalism itself. We, the witnesses, expend a great deal of breath and ink promising to “never forget.” Yet both globally and locally, in ways large and small, there is huge resistance to even the smallest reminders of injury: no one wants to talk about trauma or privilege as the invisible distributors of public costs and private benefits today. No one wants to bring it home.

In the United States, there has emerged an alarming trend of officially sanctioned oblivion. The most jaw-dropping example was Wisconsin Governor Scott Walker’s attempted removal of the words “search for truth” from the 100-year-old mission statement of the state university system. Walker also made news when a BBC moderator asked him if he believed in evolution. “I’ll punt on that one,” he said. “I am going to leave that up to you.” Leaving it “up to you” is also what Rand Paul would do with public-health programs like measles vaccinations: “Parents own the children,” he un-reasoned. The board of governors of the University of North Carolina recently eliminated the Center on Poverty, Work & Opportunity; the Center for Biodiversity; and the Institute for Civic Engagement and Social Change. (Also targeted, but hanging on for now, are the Carolina Women’s Center, the UNC Center for Civil Rights and the UNC Institute on Aging.) Legislators in Arizona have actually banned outright Latin American studies from public-school curriculums. And the Kansas Board of Regents has “reserved the right” to fire any employee in the system, including tenured professors, if they publish anything on social media that is “improper,” “impairs harmony….among co-workers” or is “contrary to the best interests of the employer.” In Oklahoma, State Representative Dan Fisher pushed a bill through the legislature to slash public funding for Advanced Placement history classes, fearing that they are neither “positive” nor Christian enough. His objection was not that the curriculum was inaccurate, but that the facts were such a drag. (He wants AP history to be inspiring—all about American exceptionalism! And the Ten Commandments! Or, as Rudolph Giuliani instructed President Obama: “I’m happy for him to give a speech where he talks about what’s good about America and doesn’t include all the criticism.”)

Recently, the Equal Justice Initiative issued a real downer of a report. The EJI has documented lynchings around the country from 1877 through the 1950s, revealing a higher number of these murders (nearly 4,000) than have been counted before now, even with the study limited to only twelve states. (The study focused on the Deep South, in other words, and did not extend to areas like Arizona, Ohio, New Mexico, Michigan and California, where African-Americans, Mexicans, Chinese, Jews and Indians were also lynched without consequence.)

The EJI accompanied the publication of its report with a call to affix memorial markers at the spots where lynchings took place, ritualizing what political philosopher Nancy Fraser has called a “politics of recognition.” Perhaps we might think of it as a project akin to German artist Gunter Demnig’s placement of Stolpersteine, or “stumbling stones.” Demnig has laid over 27,000 small stones into sidewalks around Europe, each inscribed with the words “Here lived…” and the name of someone murdered during World War II because of that person’s religion, politics, ethnicity or sexual orientation. Demnig says he began the project after encountering a woman living near his home in Cologne who insisted that there had been no Roma in that area: “She just didn’t know that they had been her neighbors.” Demnig decided to bring the names of those dead home. His efforts to fulfill what the French call the “duty of memory” represent a small, powerfully transformative linkage of the horrors of the Holocaust to presently lurking potentialities, as new waves of fascism and neo-Nazism erupt across Europe.

At home in the United States, there is similar forgetfulness about important aspects of our own history. Despite current popular conceptions, for example, most lynchings did not involve anonymous perpetrators and anonymous victims melting into the “Southern Gothic” obscurity of moonless midnight swamps. As the EJI report reminds us, lynchings were more often horrific spectacles—extralegal yet entirely public—with photographers, refreshment vendors and children drinking lemonade, with illustrated postcards made and sent openly in the mail and triumphal distributions to the onlookers of ears, penises and other charred body parts. (My 99-year-old father still feels the terror that shook him when his parents read the newspapers aloud. “There was one almost every week,” he recalls.) Our American stumbling stones might well be labeled “Here died…” to remind us that this history is real, is part of us, whether we’re white, black, a recent immigrant or indigenous. It lives among our families and in our neighborhoods; we will be haunted by its shape until we stop to name it, see it and bring it home at last.

One of the women interviewed by the EJI described her grandfather’s deathbed confession that he had been part of a mob that had lynched an innocent black man. “My grandfather carried this guilt all of his life…. Of course he never had to answer for what he did…. I wish I knew the name of that lynched man, if only so I could find out what happened to the family that he left behind. The ignorance among white people of my generation (I’m 48)…is near total. Nobody talks about it. Ever.” But knowing the traumatic landscape from which we arise does not make our polity weaker or less loved. To the contrary, reminding ourselves of collective sorrow is a gesture of respect. We pause for the blood spilled here… and here… and here. We account and ask forgiveness. We see.