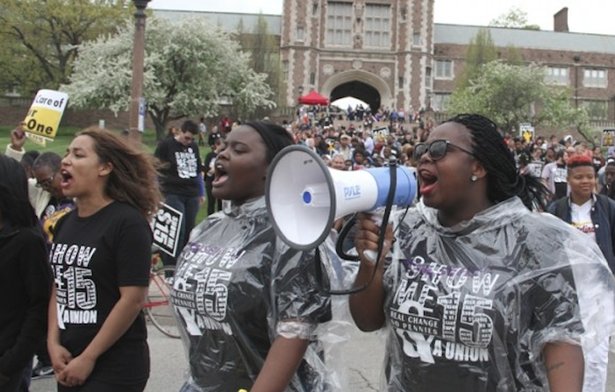 This post is part of The Nation’s biweekly student movement dispatch. As part of the StudentNation blog, each dispatch hosts first-person updates on youth organizing. For recent dispatches, check out March 16 and April 10. Contact studentmovement@thenation.com with tips. Edited by James Cersonsky (@cersonsky).

On April 15, I went on strike from my job at McDonald’s in St. Louis because I need more than $7.65 an hour, minimum wage, to take care of my family and pay for tuition as an incoming college freshman studying to be a healthcare provider. Adjunct professors, students, home care workers and childcare workers—here and across the country—came out in force to show how the Fight for $15 is growing. We protested at fast-food restaurants, chanting “$15 and a union! No music!”

Since 1999, the Progressive Student Alliance, a local of United Students Against Sweatshops at the University of Tennessee–Knoxville, has been fighting with the campus union, United Campus Workers, for living wages and justice for women and people of color. On April 15, as part of a national student mobilization, we traveled from Knoxville to Ferguson with Show Me $15. When we made it to West Florissant Avenue, we joined 400 others, and a large group rushed into McDonald’s to support fast food workers, chanting “Come on out, we got yo’ back!” As we marched to Canfield Street, where Mike Brown was killed, we held 4 minutes of silence for the four hours that police let him lie in the street after being executed. This was a day of rage in which we rallied, took back the streets and showed that we are not intimidated by corporate resistance to raising poverty wages.

On April 17, hundreds of immigrants and advocates from across the country gathered in New Orleans, where a panel of three judges weighed a request for an emergency stay on a lawsuit filed by 26 anti-immigrant Republicans to delay the implementation of DACA and DAPA, a program announced by the Obama administration in November, which promises to shield millions from deportation. I was in the courtroom with someone who would be able to qualify for DAPA—my mom, who, 22 years ago, made the courageous decision to leave her family and career in order to give my sister and me a shot at a better future. As we listened to the arguments from both sides, we could hear the roar of people outside. As the case rolls on, we will continue preparing our community to apply for relief.

Following the deaths of Michael Brown and Eric Garner, Charleston community members formed a plan for how we would respond to a similar tragedy in our community. When Walter Scott was killed on April 4, we operated from a stance of “Negotiate, Demonstrate, Resist,” with a vision of justice founded on ending the epidemic of violence against the black community and implementing a system of police accountability. On April 8, we assembled outside City Hall, calling on the mayor to establish a Citizen Review Board, which would have the power to investigate officers independently—a departure from the rubber-stamp internal investigations that have resulted in few charges, and zero convictions, in the 209 officer-involved shootings in South Carolina in the five years preceding Walter Scott’s death. While waiting for a positive response, we have temporarily escalated to the “Resist” stage of our strategy—shutting down intersections, highways and access to City Hall on several occasions. We will continue mounting pressure until the city responds.

On Saturday, April 18, the University of California–Berkeley’s annual “Cal Day,” the Black Student Union blocked Sather Gate in protest of a racially hostile campus climate. On February 13, the BSU presented the chancellor with a list of ten demands aimed at increasing recruitment, retention, mental health and other resources available to Black students on campus. After receiving incomplete responses to the demands, we decided to take the message public. Despite being harassed with racist comments both online and in person, we remained peaceful while protesting for almost three hours. In the coming weeks, we will persist until our demands are implemented.

6. In Middletown, Injustice Is Not an Investment

On Thursday, April 16, 38 students at Wesleyan University hosted a sit-in at President Michael Roth’s office. As a coalition for divestment and transparency, and in conjunction with other schools with escalating campaigns, we are calling for total divestment from fossil fuels, the prison industry and the Israeli occupation. After we took over the office at noon, the president sat down with us, but no progress was made. We remained there until 10:45 PM, leaving out of consideration for the security staff who would have had to work 16-hour shifts, before returning at 7:45 the next morning with a set of updated demands for prison divestment. Subsequently, the president agreed to find out if the university had holdings in private prisons and companies such as G4S, CCA and GEO and, if so, divest and ensure no future investments would be made.

—The Coalition for Divestment and Transparency

7. In Tuscaloosa, a Historic Sit-In

For two years, students at the University of Alabama have called on the university to join the Worker Rights Consortium to ensure proper monitoring of the factories that produce collegiate apparel. On Monday, April 6, ten students, alongside community supporters and two Bangladeshi supporters, one of whom survived the April 2013 Rana Plaza factory collapse that claimed over 1,100 lives, staged a sit-in at President Judy Bonner’s office—the first documented occupation of the president’s office since the university was established in 1831. Chanting, singing and remembering those who came before us, we demanded that the university respect the lives of garment workers that make its apparel and make the decision to join the more than 180 universities affiliated with the WRC.

On April 18 and 19, 90 Iowans came together at Grinnell College to form the Iowa Student Power Network. Alongside members of USSA, SLAP, Iowa CCI and the Virginia Student Power Network, as well as former US Representative Berkley Bedell, students from eight campuses launched statewide campaigns to end sexual assault, fight for climate justice and build power in all 99 Iowa counties. To kick off the network, we launched the Divest Grinnell campaign with an aerial photo action visualizing “IA Students > Fossil Fuels.” We are planning to host our next convergence in the fall.

After months of research and planning, Philadelphia Student Union members from the city’s flagship Science Leadership Academy launched the #MoreThanATest website, which catalogues dozens of testimonies detailing why our education cannot be reflected by standardized test scores. We demand that Pennsylvania remove Keystone testing as a graduate requirement. Instead of the current formula, in which schools receive more or less funding based on test scores, we believe that all schools should receive full and fair funding. Decision-makers cannot expect us to perform well on tests when our schools’ resources are cut year after year. Alongside students across the country this spring, we are encouraging everyone to opt out.

On April 10, the University of California–Santa Cruz revealed that it is under investigation by the Office of Civil Rights for possible Title IX violations due to mishandling complaints of sexual violence on campus. Three days later, students on campus took part in the Carry That Weight National Day of Action, shouldering mattresses to symbolize the burden sexual violence places on survivors. We held a 4-hour, continuous carry in a major campus hub, asking passersby to stop and help us in order to raise awareness. At the end of the day, two groups of students marched through campus carrying mattresses, chanting and holding signs saying “End Rape Culture” and “Safe Campuses are a Civil Right.” The Day of Action, which fell during Sexual Assault Awareness Month, is one of many events planned to engage the campus in ending sexual violence.