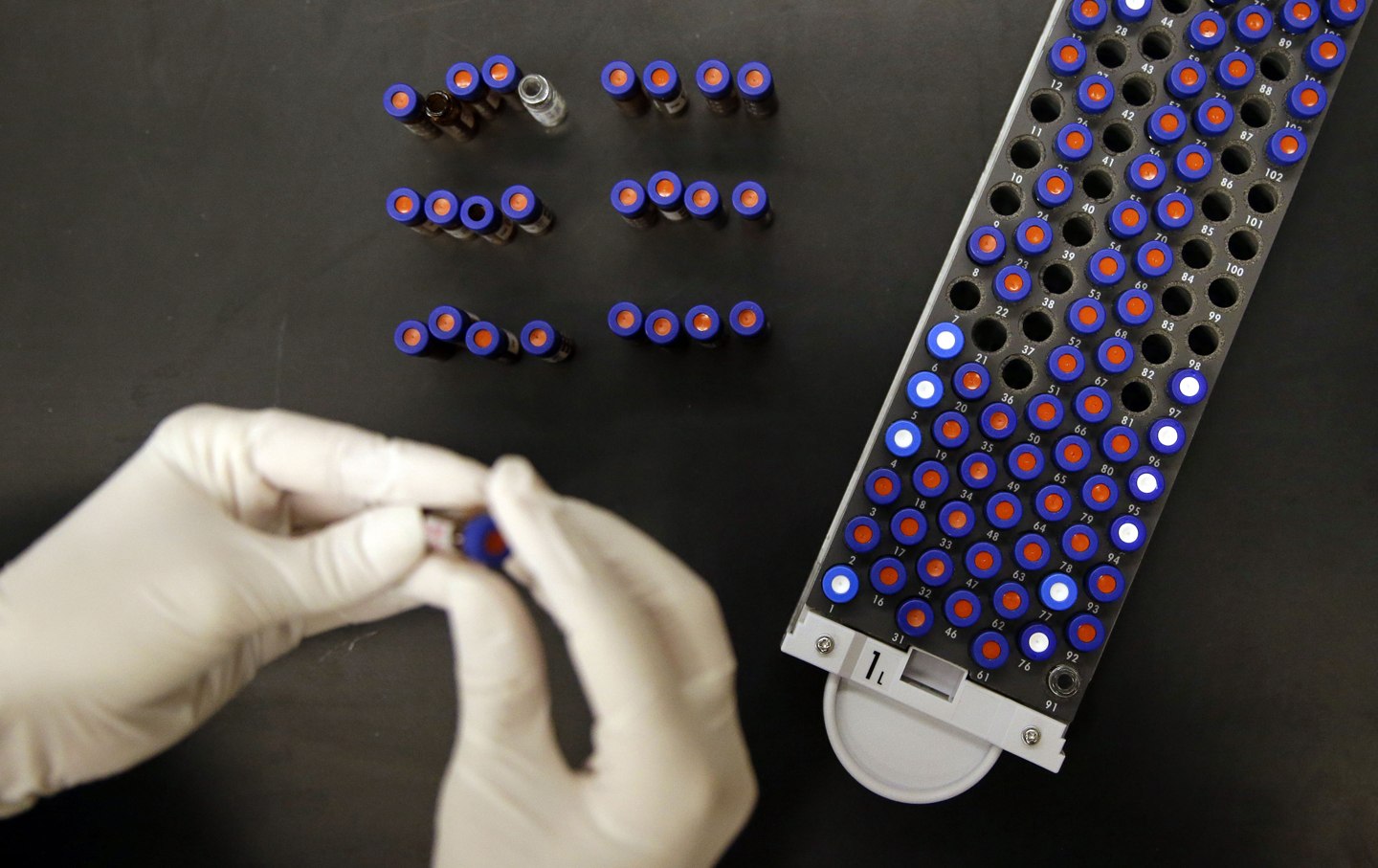 If you think fetal-tissue research is wrong and should be banned, would you refuse to use any therapies that may come out of it? I thought not. I’ve posed this question to abortion opponents before, but so far, no one has said, Yes, Katha, I would rather let Alzheimer’s turn my brain into cottage cheese and ketchup than benefit from this diabolical practice. If I get Parkinson’s, HIV, breast cancer, diabetes, or the flu; if I go blind from macular degeneration; if I have a miscarriage, so be it. Treatments for those conditions are still being developed, but surprise! If you have been vaccinated for polio, mumps, measles, chicken pox, hepatitis, or rabies, it may be too late for you to stand your ethical ground: You have already benefited from fetal-tissue research. This is, after all, a practice that’s been legal since the 1930s. In 1954, John Enders, Thomas Weller, and Frederick Robbins won the Nobel Prize for work on the polio virus that paved the way for the Salk and Sabin vaccines. They used fetal tissue, the monsters. Should their heirs return the medals?

As has been noted with some glee, when Congress lifted President Reagan’s ban on federal funding for the research in 1993, plenty of Republicans voted yea. Among them were Orrin Hatch, Mitch McConnell, Lamar Smith, and Fred Upton, who are now baying for Planned Parenthood’s blood in the wake of the videos secretly recorded by anti-choice activists—videos that do not, in fact, show Planned Parenthood officials killing babies to sell their “body parts.” Where did those gentlemen think the tissue would come from, if not abortion? (John Kasich, a congressman at the time, voted no, then as now hardly the “moderate Republican” depicted in the media.) It’s amusing to see them try to square that vote with their newfound abhorrence for what it legalized. “On viewing the video,” Upton wrote in July, “the contents can’t help but make you weep for the innocents who were sacrificed in such a cavalier manner for alleged profit.” So if Planned Parenthood lost money on fetal tissue, it would be okay to “harvest” it? As long as nobody got graphic about it over wine and salad?

If you’ve been vaccinated for polio, measles, or hepatitis, you’ve already benefited from fetal-tissue research.

Of course not. This isn’t about fetal tissue. It’s about abortion. It’s about showing those bloody pictures and making providers look greedy and heartless. Fetal-tissue research is collateral damage in the war against Planned Parenthood, and it has already been banned or severely restricted in six states. Nebraska and Wyoming ban the transfer of fetal tissue, and New Jersey and California are considering laws that would limit suppliers’ ability to recover costs. In August, Arizona governor Doug Ducey issued a temporary rule requiring abortion clinics to report the destination of fetal tissue to state health officials. North Carolina has just passed a bill criminalizing the sale of tissue from aborted fetuses (already illegal under federal law). For good measure, the same bill defunds Planned Parenthood’s teen-pregnancy-prevention programs. According to state legislator Larry Pittman, the organization distributes contraceptives that “don’t work” in order to “get more business.” This is what we are dealing with, people.

Meanwhile, the Wisconsin state legislature is debating not just banning the sale of fetal tissue (already illegal, see above) but making research using tissue from any fetus aborted after January 1, 2015, a felony. Leading the charge in the Assembly is Tea Partier André Jacque, who in a previous session proposed an amendment to the state constitution recognizing fertilized eggs as people. Like many opponents of Planned Parenthood, Jacque pooh-poohs the importance of fetal tissue. “If aborted fetal tissue is available, [researchers] don’t feel that they need to try an alternative. They’re going with the most convenient, the laziest route.”

Not so, says Robert Golden, dean of the University of Wisconsin School of Medicine and Public Health. Those who claim that fetal tissue is unnecessary “are not talking to leaders in the field.” (When NPR’s Diane Rehm Show took up the topic, the argument that fetal-tissue research is outmoded was presented by the research director of the Charlotte Lozier Institute, an anti-abortion outfit, while a distinguished professor from the Johns Hopkins School of Medicine made the case for its continued usefulness.) Besides the threat to researchers currently using fetal tissue in their work, Golden said there would be a chilling effect going forward; why would top scientists come to Wisconsin? The proposed ban comes on top of other attacks on the state university—severe budget cuts, threats to tenure, and an attempt by Governor Scott Walker to rewrite the institution’s mission statement to focus on economic development rather than on “the search for truth.” “Why is the legislature interfering with research that is totally legal and carefully monitored and reviewed?” Golden asked. “There are some well-intentioned religious people who support the ban, but some of the people leading the charge are using despicable tactics, including slander, threats, and lies. Medical faculty have been compared to Josef Mengele and Frankenstein.” (I should mention that Golden is a relative.)

If the Wisconsin bill fails, Golden told me, it may be because business-oriented conservatives recognize the potential damage to Wisconsin’s burgeoning biotech industry. That wouldn’t be a good look for Walker, who promised that job creation would be the centerpiece of his governorship. Ironically, the attempt to ban fetal-tissue research may be thwarted not by the demonic might of “the abortion industry,” or by the close to 700 Wisconsin faculty members who signed a protest letter, but by the state chamber of commerce.

Sometimes I look at the anti-scientific hot mess our country is becoming and I think, “Okay, America, be like that. Never mind that banning fetal-tissue research will not prevent a single abortion. Never mind that the videos do not show Planned Parenthood doing anything illegal. Let some other country do the science, patent the cures, lead the world in biotech. You just keep planting those churches and turning our universities into trade schools for middle management. We’re number one!”