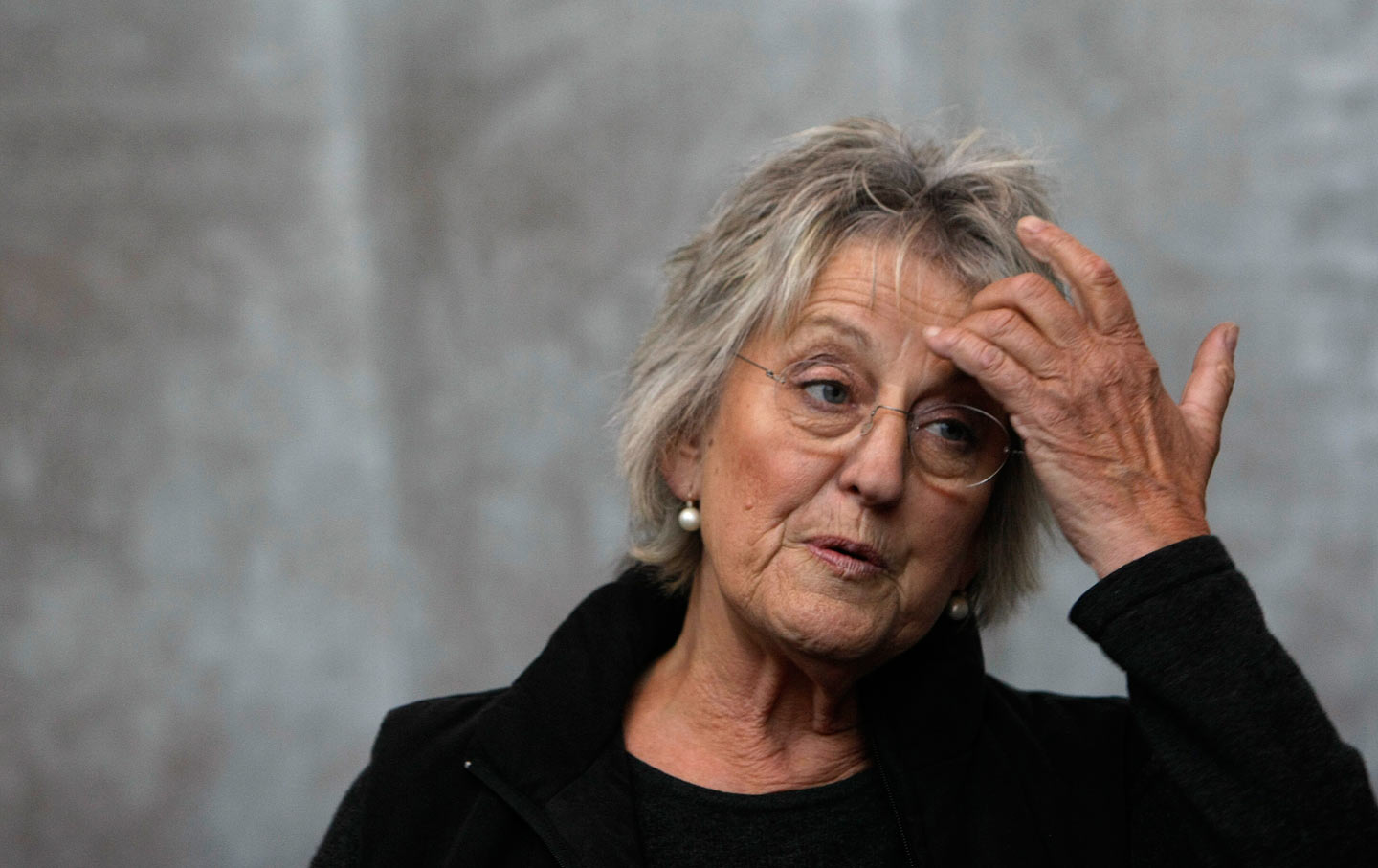 Germaine Greer has said a lot of fool­ish things in her long career. She’s defended female genital mutilation and polygyny. She’s said that what really matters to women isn’t sex but children—this from the author of The Female Eunuch, a feminist classic that urged women to claim freedom and sexual pleasure just like men! I reviewed The Change, her 1992 book about menopause, for The New Yorker, and found it an entertaining mess: On one page, she blamed society for ignoring the sexuality of middle-aged women; on the next, she urged those same women to stop fighting nature and embrace their inner crones. Still, when I was invited to interview her a few years ago about Shakespeare’s Wife, her biography of Anne Hathaway, I was delighted. I did not start a petition to have her invitation canceled on the grounds that anyone who approves of cutting off little girls’ clitorises has no place on a podium talking about any subject, even Elizabethan England. I thought: Here’s a woman who has lived a big life and, at 70, has written a book that tries to rescue one of history’s most famous wives from oblivion and misogyny. That’s feminism.

Not to Rachael Melhuish, a women’s officer at the Cardiff University Students’ Union in Wales, it seems. She’s trying to get Greer disinvited from speaking at her school. But she isn’t particularly concerned with Greer’s views on female genital mutilation or patriarchal family structures in the developing world. What she objects to is Greer’s “transphobia”—her “misogynistic” belief, expressed with characteristic exasperation on the BBC and elsewhere, that trans women are not real women. In a Change.org petition, Melhuish writes:

Trans-exclusionary views should have no place in feminism or society. Such attitudes contribute to the high levels of stigma, hatred and violence towards trans people­—particularly trans women—both in the UK and across the world.

While debate in a University should be encouraged, hosting a speaker with such problematic and hateful views towards marginalised and vulnerable groups is dangerous. Allowing Greer a platform endorses her views, and by extension, the transmisogyny which she continues to perpetuate.

Where to begin? Violence against trans women is the fault of feminists? I doubt the brutal men who assault and murder trans women have even heard of Greer­­—or are likely to attend her proposed lecture on feminism in the 20th century (which, she says, will not touch on the subject of trans women at all). And if you believe that inviting someone to lecture on campus is an endorsement of their views—even on subjects they’re not lecturing about—it doesn’t sound as if you’re really all that keen on debate. It sounds more like you want the university to invite only people who think like yourself.

I don’t want to make too much of this incident. The petition hasn’t proved very popular, Cardiff has said the lecture is on, and Greer has said she’ll be there. But it’s only the latest in a series of incidents, in the United Kingdom and the United States, in which campus feminists and leftists have tried to force universities to cancel speakers they’ve decided are beyond the pale. It’s both unfortunate and bizarre that at a moment when feminism is showing renewed signs of life, the first impulse is to narrow the conversation and throw rotten vegetables at everyone who isn’t singing 100 percent in unison. And did I mention ageism? That prejudice seems to be completely acceptable. A typical tweet: “Germaine Greer is an insane old woman. Just watched the interview, she should be in an old peoples home.” In the UK, the National Union of Students has “no-platformed” (attempted to prevent from speaking anywhere) the lesbian feminist writer and activist Julie Bindel for “transphobia” stemming from a 2004 article in The Guardian in which she mocked the notion that having a sex change made someone a woman. (Although she’s apologized for the tone of that piece, it doesn’t matter: She questions the use of sex-reassignment surgery, especially for children, and that’s enough.) Transgender-rights activists argue that trans women are real women, irrespective of their physical attributes, and have always been so. But even if that view prevails, the movement has taken a wrong turn somewhere if Bindel—a decades-long campaigner for lesbian rights and against male violence toward women—is the misogynist, and the feminists include male “allies” screaming at her to shut up.

Why can’t feminists, like other people, be valued for what they get right—for the questions they raise and the productive lines of thought they open up—rather than declared personae non gratae for what they get wrong? It’s hard to find an intellectually curious, energetic writer or scholar or activist or human being who hasn’t said or written something very, very mistaken. But you can still learn from them—if only how better to argue against them. And if that’s too upsetting, you can always stay home.

Even abortion isn’t as divisive a subject as transgender rights: No one pickets a campus talk by Sister Helen Prejean because she belongs to a church that demands that raped 10-year-olds give birth. You don’t see anyone no-platforming conservatives who support cuts in government programs that devastate poor women and families, or foreign officials representing governments that deny women basic human rights. There’s a virtual standing army of prominent people—people with actual real-world power—who are more intimately connected with the subjection of women than Germaine Greer or Julie Bindel; to say nothing of the numerous people, like the classics scholar Mary Beard and the gay-rights campaigner Peter Tatchell, who have supported their campus appearances and found themselves in the same crosshairs.

Supporters of speaking bans often argue that no freedom-of-speech issues are involved, because the banned speaker is famous and has plenty of ways to get his or her word out. That’s true for Greer, but beside the point: While she doesn’t need Cardiff, maybe the feminists of Cardiff need Greer. Because a movement that has no room for controversy is a movement that risks talking only to itself.

Ros Baxandall, 1939–2015. The historian, educator, left-wing feminist activist, and onetime Nation contributor Rosalyn Baxandall died last month of kidney cancer. Ros was brilliant, funny, and fearless, with more vitality than most people half her age. A pioneer of women’s labor studies, she not only wrote history, she made some too: In the late 1960s, she picketed the Miss America pageant, helped organize the famous speak-out on abortion at Judson Memorial Church in Greenwich Village, and organized the first feminist daycare center in New York City. Even after she moved into scholarship and teaching—she was for many years the head of American Studies at the State University of New York at Old Westbury—activism remained part of her life, along with tennis, gossip, reading, and adventure. She was one of those people who made the world seem full of possibility and surprise, and I will miss her very much. Sometimes it feels like all the really interesting people are going.

There will be a memorial service for Ros from 2 to  4 pm on January 9 at Judson Memorial Church in  Manhattan.