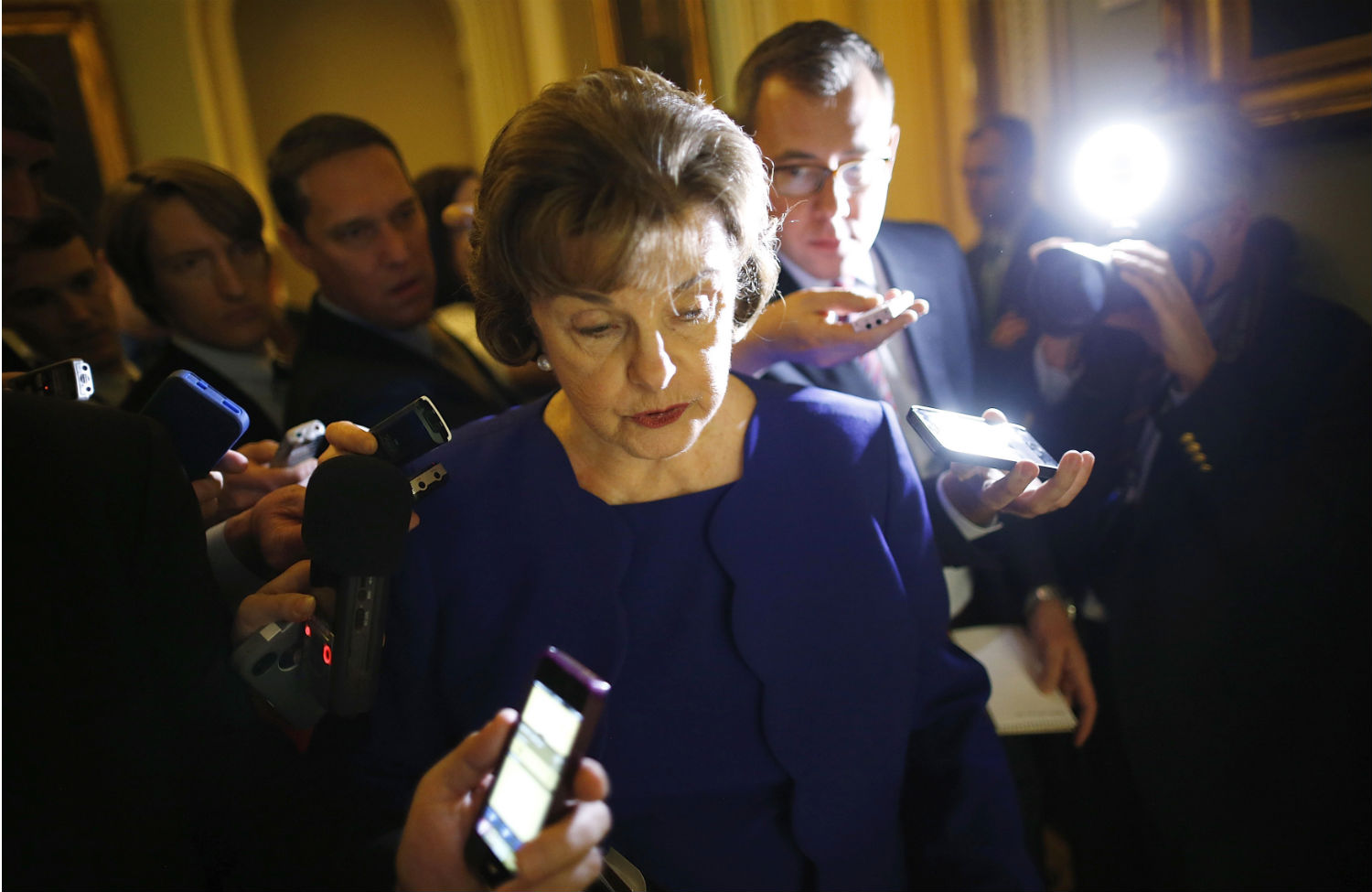 Senator Dianne Feinstein is trailed by reporters at the US Capitol on March 11, 2014. (Reuters/Jonathan Ernst)

It was a truly historic moment Tuesday when Senate Intelligence Committee Chair Dianne Feinstein took to the Senate floor to warn that the CIA’s continuing cover-up of its torture program is threatening our constitutional division of power. By blatantly concealing what Feinstein condemned as “the horrible details of a CIA program that never, never, never should have existed,” the spy agency now acts as a power unto itself, and the agency’s outrages have finally aroused the senator’s umbrage.

As Senator Patrick J. Leahy, chair of the Judiciary Committee that will be investigating Feinstein’s charges noted, “in forty years here, it was one of the best speeches I’d ever heard and one of the most important.” That was particularly so, given that Feinstein’s searing indictment of the CIA’s decade-long subversion of congressional oversight of its torture program comes from a senator who previously has worked overtime to justify the subversion of democratic governance by the CIA and other spy agencies.

But clearly the lady has by now had enough, given the CIA’s recent hacking of her Senate committee’s computers in an effort to suppress a key piece of evidence supporting the veracity of the committee’s completed but still not released 6,300-page study that the CIA is bent on suppressing.

The Senate’s investigation began in earnest with the December 7, 2007, revelation in The New York Times that the CIA had destroyed videotapes of its “enhanced interrogation techniques,” despite objections from then-President Bush’s director of national security and the White House counsel. At that time, then–committee chair Jay Rockefeller, a West Virginia Democrat, sent staffers to begin the painstaking process of reviewing the limited material that the CIA was willing to make available; their preliminary report wasn’t issued until early 2009.

By then, Feinstein had assumed the chairmanship and, as she recalled in her Tuesday speech, “The resulting staff report was chilling. The interrogations and the conditions of confinement at the CIA detention sites were far different and far more harsh than the way the CIA had described them to us.”

Feinstein, ostensibly backed by new President Barack Obama, who had campaigned as an opponent of the CIA’s methods, obtained the committee’s bipartisan backing for an expanded investigation. But the CIA, led at the time by Obama appointee Leon Panetta, the former Democratic congressman, put numerous logistical obstacles in the way of the Senate investigation.

As Feinstein pointed out, “the CIA hired a team of outside contractors—who otherwise would not have had access to these sensitive documents—to read, multiple times, each of the 6.2 million pages of documents produced, before providing them to fully-cleared committee staff conducting the committee’s oversight work. This proved to be a slow and very expensive process.”

It was so slow that the committee’s investigation has only now been completed. Along the way, documents that Senate staffers found interesting would then mysteriously disappear from the system. One such set of disappeared documents, referred to as the “Internal Panetta Review,” is now at the center of the CIA hacking scandal.

The Panetta Review became relevant in June, when the CIA offered its critique of the Senate study. But as Feinstein points out, “Some of those important parts that the CIA now disputes in our committee study are clearly acknowledged in the CIA’s own Internal Panetta Review. To say the least, this is puzzling. How can the CIA’s official response to our study stand factually in conflict with its own Internal Review?”

Feinstein defended the committee staff’s spiriting information away from the CIA: “As I have detailed, the CIA has previously withheld and destroyed information about its Detention and Interrogation Program. … There was a need to preserve and protect the Internal Panetta Review in the committee’s own secure spaces.”

The response of the CIA was to hack the computers that Senate staffers had been using at the CIA off-site location, and the agency’s acting general counsel filed a crimes report with the Department of Justice against the Senate committee’s staff.

That was too much for Feinstein, who outed the CIA’s counsel:

I should note that for most, if not all, of the CIA’s Detention and Interrogation Program, the now acting general counsel was a lawyer in the CIA’s Counterterrorism Center—the unit within which the CIA managed and carried out this program. From mid-2004 until the official termination of the Detention and Interrogation Program in January 2009, he was the unit’s chief lawyer. He is mentioned by name more than 1,600 times in our study. And now this individual is sending a crimes report to the Department of Justice on the actions of congressional staff—the same congressional staff who researched and drafted a report that details how CIA officers—including the acting general counsel himself—provided inaccurate information to the Justice Department about the program.

Enough said, except that White House spokesman Jay Carney put the president on the side of those like current CIA Director John Brennan covering up torture: “The president has great confidence in John Brennan and confidence in our intelligence community and in our professionals at the CIA.” It’s something that George W. Bush would have said.