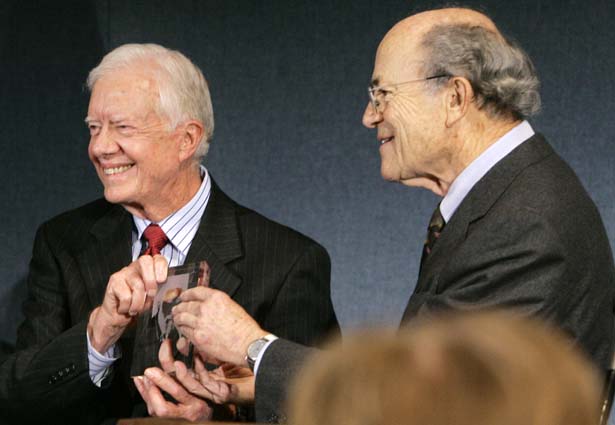 Much is being said about Rabbi Beerman this week, including at his packed funeral service on Sunday at the synagogue he founded and served so well: how he would dare to criticize Israel—the country where he lived, served and studied as a young man—when it was necessary, even if it offended many of his listeners; how he used the lectern for causes he deeply believed in, from denouncing the hysteria of the Red Scare to advocating for Palestinian rights to an end to the wars of the moment.

My memories of Leonard are of a more personal nature. Because of his affection for my family, he agreed to consider officiating my marriage. Surprisingly, at the time, he had not done so for an interfaith couple. I will never forget going to his office at Leo Baeck Temple to discuss the upcoming event. Leonard was wearing a large contraption on his chest. He said he’d been having some heart issues, and the doctor simply wanted to know when he was under stress.

As my fiancé and I proceeded to tell him about our wedding plans, I truly thought he was going to have heart failure right then. A surprise wedding? Beep went the monitor! No rings to be exchanged? Beep! No speeches over a minute thirty? (My husband is in the TV news business, in which nothing exceeds that length) Beep! No guarantee to raise children in his faith? Beep! I finally agreed to the break-the-glass ritual, which seemed to settle him down. Leonard consented finally, but said he was doubtful such a “wedding” could work. He later said it was possibly the most touching and spontaneous wedding he’d ever presided over.

When my mother died, Leonard came over to plan a memorial. Perhaps to head off tears, my father and brothers rather quickly started talking details. Leonard quieted them immediately, reached out for our hands and said, “Just a minute here. This is Grace we’re talking about.” It was never just business with that remarkable man.

His relationship with my father went very deep and was filled with trust. They were in a men’s group called Tuesday Knights, which met once a month for decades. Such male gatherings were extremely rare in those days, a group of eight or nine highly successful men discussing personal issues with each other that they rarely talked about at home. Leonard was a huge admirer of my dad’s ability not only to give away so much of his own wealth, but to urge others to do the same.

Which is why Leonard did not flinch for a moment when my father proposed a seemingly audacious idea called The Interfaith Center to Reverse the Arms Race. As a result, Leonard and the Episcopalian Rev. George Regas of Pasadena’s All Saints Church, would speak at each other’s entity on a regular basis, hold press conferences and support pacifist initiatives. The Center was considered hugely radical at the time, and both Leonard and Regas initially took heat from their own congregations. But it went on to great success.

My brother used to say the most dangerous weapon to put in a rabbi’s hand is a microphone, but no one ever said that about Leonard Beerman. His words were succinct and meaningful. He was also just a man, which is how I knew him. He had his favorite chocolate ice cream flown in from Cincinnati; he wept openly when his eight-year old granddaughter died; he played tennis almost to the end; he married and loved twice, the second time with particularly joyful passion; he had a funny story about everything.

I recall him discussing a memorial for someone who was obviously a first class SOB. When he asked if there was anyone who could say something about the deceased, one timid fellow finally rose and said, “His brother was worse.”

No one was better than Rabbi Leonard Beerman.