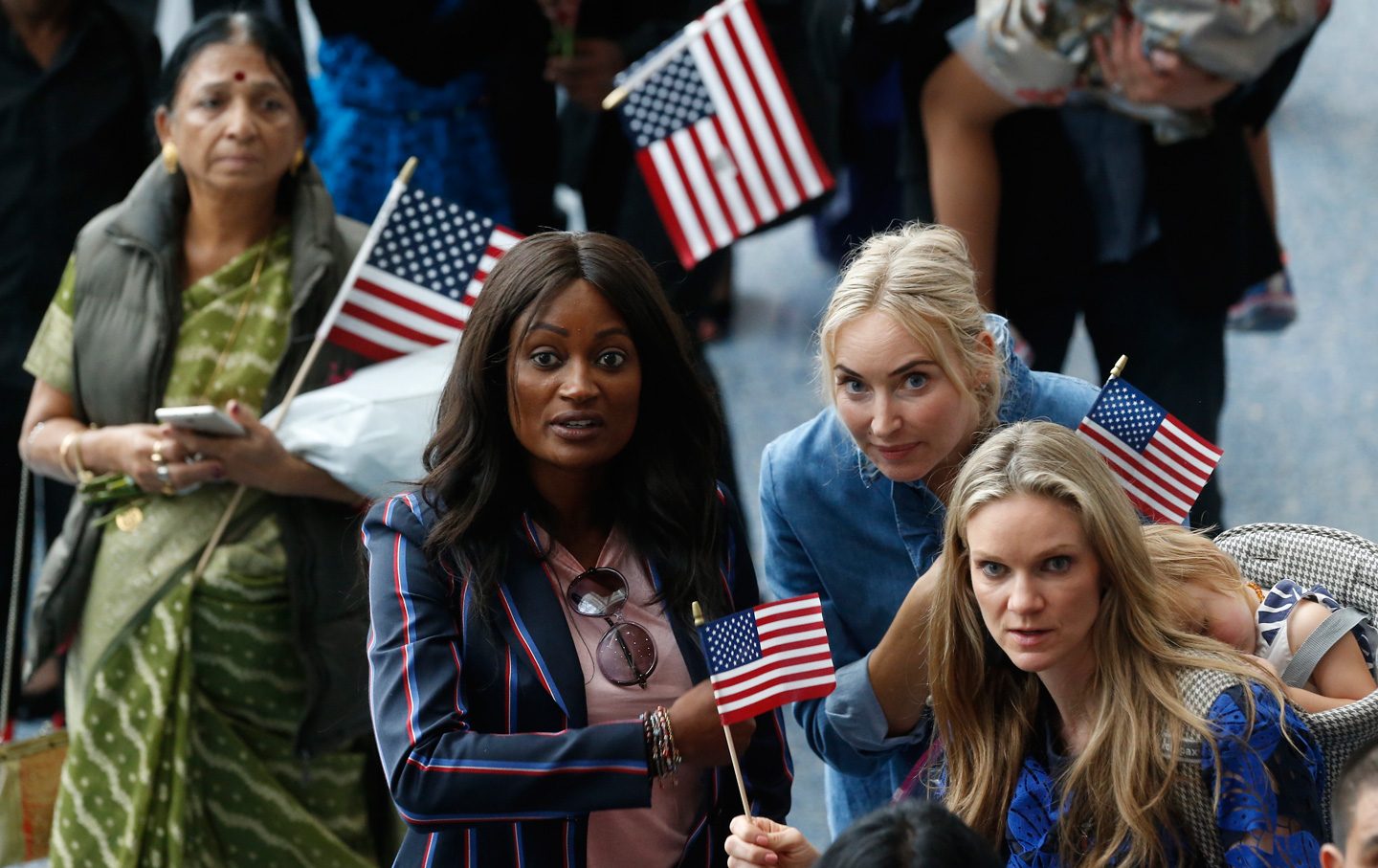 Family members look for their relatives as they exit as new citizens at ceremony in Los Angeles, September 20, 2017. (AP Photo / Damian Dovarganes)

I came to the United States by myself when I was 16 years old. My parents had about $5,000 in their bank account, and they used it all to send me here because they truly believed that this country was where I was going to get the best education and have the best opportunities. It didn’t occur to me when I left home that I would never live in the same country as my parents again. It took me 17 years to become a US citizen. It would have taken many more years for me to sponsor my parents, but by then they were simply too old to pick up and move their lives.

Anyone who has been through the immigration system understands that immigrating to America is already a complex, difficult, and long process, one that has not been updated for decades with simple reforms that meet the needs of our country. Today, over 4.7 million people wait to be reunited with their families in what is commonly referred to as the “backlog.” These are legal residents who want to be reunited with their children, parents, and siblings; sometimes they must wait for more than 20 years.

Family reunification has been the backbone of US immigration policy for more than 50 years. What Republicans so cynically refer to as “chain migration” is actually family-based immigration—a humane and compassionate policy of reunifying families. It allows spouses to be together, siblings to support each other, and children to be with their parents. It allows the immigrants who are already here to be successful. In a system that I have previously dubbed “sexclusionary” because most of the immigration employment categories are designed to benefit men, family-based immigration is also the primary mechanism that allows women to enter the country. Nearly three-quarters of all women immigrants obtained their legal status through sponsorship by a close relative. And, unbeknownst to many, three-quarters of all immigrants to the United States are women and children.

Equally important, family-based immigration has allowed families to survive in a country where quality childcare and health care are simply unaffordable for the vast majority of people. Men and women can go to work because a parent, aunt, or uncle is at home, taking care of their children. Family members take care of each other when sick or disabled. The vast majority of immigrants—regardless of the conditions of war and poverty that may wrack their home countries—come and contribute to their new home country: building our roads, caring for our homes, children and elders, and serving as doctors, lawyers, employers, and innovators.

Republican attempts to recharacterize this valuable system of family-based immigration as “chain migration” are not just false; they are rekindling a racist ideology that was present at the beginning of our immigration system. Our immigration policy has its roots in excluding immigrants from “undesirable” non-white countries and focusing immigration on white countries, an ideology still scattered through many of our outdated laws. But racism pervaded even early migration from white countries such as Ireland, when the Irish were referred to as “black” in a derogatory way. Too many Americans today have lost the connection to how their own families came to America, and what many—including the Irish, Polish and German Jewish—immigrants suffered at the time. Trump and other conservative Republicans use this to their advantage, employing racist “otherizing” rhetoric to fuel racism and resentment against today’s immigrants who do come primarily from countries in Latin America, Asia, and Africa because of the extreme conditions of economic inequality, war and environmental destruction—the same conditions that have always driven people to migrate.

Our entire outdated immigration system is groaning under the pressures put upon it. It is used as a political football, tossed around to gin up resentment and hatred to win elections. We should all welcome real solutions, including to our family-based immigration system, like the 2013 comprehensive immigration-reform bill that passed the US Senate with 68 bipartisan votes. Unfortunately, it was never brought up in the House of Representatives, perhaps because it is politically convenient to have immigrants as scapegoats. We desperately need to pass comprehensive immigration reform—but that is not the conversation we have been having and it is not the business at hand.

Today our job is to address a real solution for the 800,000 Dreamers whose futures Donald Trump put on the line when he ended DACA. There is clear bipartisan support for the Dream Act and Democrats and many honest Republicans stand ready to take a vote on that today. Let’s stop playing around with the lives of these young people, and pass a clean Dream Act.