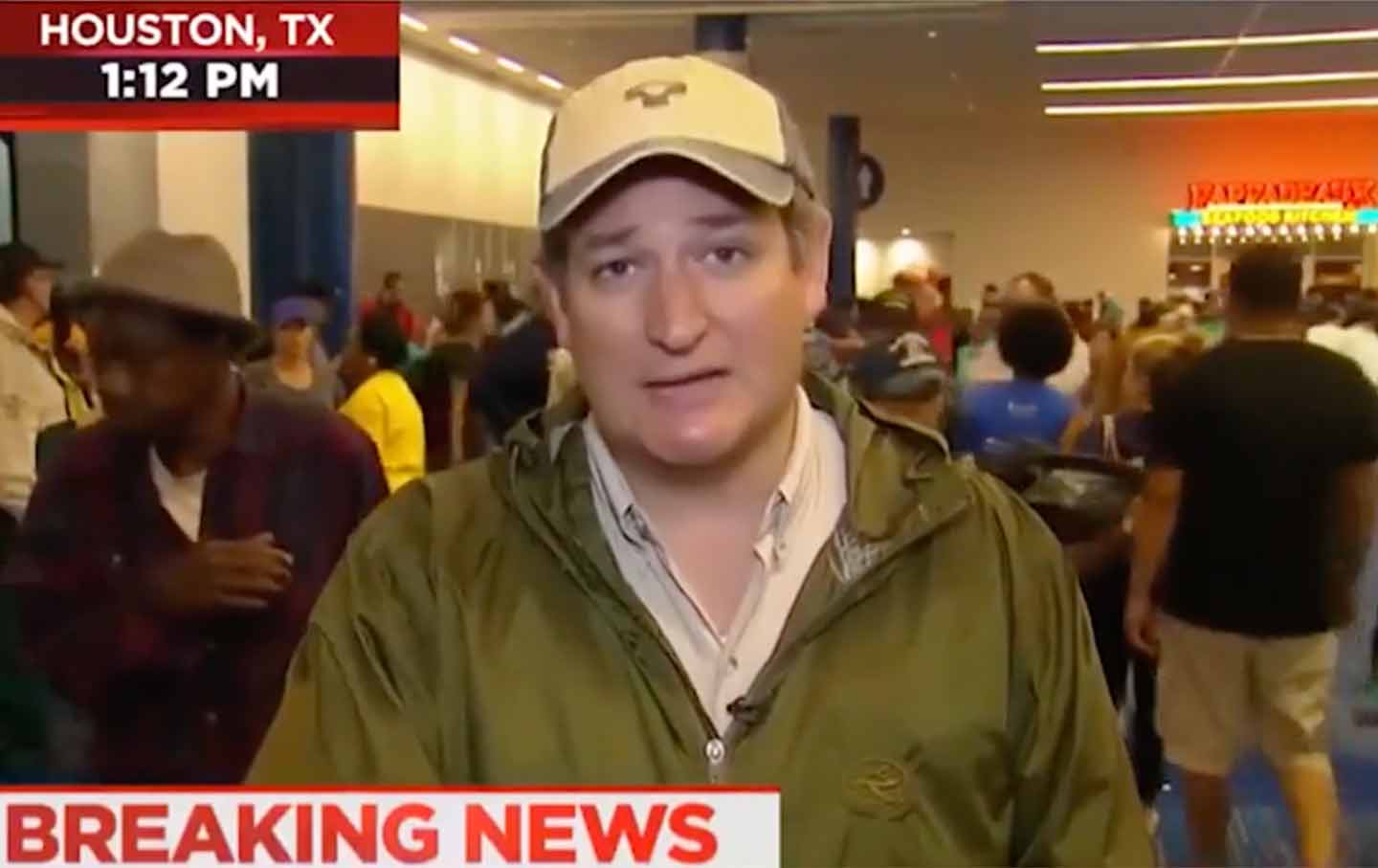 Ted Cruz defends his 2013 decision to vote against Sandy aid amid Harvey’s destruction on August 28, 2017. (MSNBC)

You know the old saying: There are no atheists in foxholes. I’ve got a new one: We’re all socialists after a natural disaster. Even Texas Senator Ted Cruz. The hypocrite who tried to block Hurricane Sandy aid to the East Coast in 2012 is now demanding the federal government expedite emergency funds for the survivors of Hurricane Harvey along the Gulf Coast of Texas, and in Houston, the nation’s fourth-largest city. East Coast Democrats are happy to help, though New Jersey Governor Chris Christie tried to renew his relevance by beefing with his party mate over his Sandy selfishness. The Washington Post gave Cruz three Pinocchios for claiming on Monday that he blocked Sandy aid only because it was larded with pork. It was not. But even in a disaster, Cruz can’t help lying.

Driving to Austin in March, I saw the way Houston emerges from the bayou—and then goes on and on, for what feels like forever. So much building, and so much water, even in dry times. This petrochemical-industry capital is built on land that is almost guaranteed to flood with regularity. With its lack of zoning laws and bias toward development, Houston is a monument to unfettered capitalism. Unfettered capitalism backed by government-backed flood insurance, that is—privatizing profit, socializing risk. But it’s also a multiracial metropolis led by a black mayor and a Latino police chief, with an insurgent progressive movement that elected a progressive Harris County district attorney just last year. We can see the best and the worst of the country in microcosm, and so far, the best is winning. With or without the “leadership” of President Trump.

As Melania Trump’s snakeskin stiletto heels clicked across the White House driveway Tuesday morning, it was obvious this Texas visit was about image over substance. (By the time she touched down in Corpus Christi, it should be noted, she’d changed into sneakers.) Accompanying the president and first lady, Ben Carson wore a HUD Emergency Team jacket (I wondered: Is there any such thing?), while Small Business Administration director Linda McMahon was decked out in an SBA Assistance jacket. Melania Trump wore a black hat emblazoned FLOTUS, so nobody would mistake her for anybody else, while Trump wore his trademark USA hat—you can buy it for $40 at his campaign website, by the way—to show he meant business. He didn’t bother to talk to any victims, or comfort any families. It’s hard to imagine a presidential visit accomplishing less.

“What a crowd, what a turnout,” said the narcissist who just fired his long-time advance man because the turnout at his Phoenix rally last week wasn’t big enough. “We’ll congratulate each other when it’s all finished,” he promised Texas Governor Greg Abbott at their FEMA briefing. That seemed like a rare case of Trump’s telling the straightforward truth—when does he not congratulate himself?

Away from the photo op, the real heroes were saving lives. One man on MSNBC talked about organizing rescue operations through social media, and it felt good to hear something positive about social media, not merely about white supremacists using it to organize their rallies. On Tuesday morning I couldn’t stop watching as a flotilla of boats—from volunteers with kayaks and jet-skis to pool rafts to big fishing boats, along with official government emergency vessels—made its way back and forth in a newly flooded northwest Houston neighborhood, ferrying residents to safety. We’ve obviously learned a lot from earlier disasters. During Hurricane Katrina, people refused to leave their homes if they couldn’t take their pets; many perished. During this rescue operation we’ve seen plenty of dogs and cats, along with their families, in the rescue flotillas.

Reporters have been among the heroes, risking their lives not merely to cover the story but also to rescue the stranded themselves. Maybe some Texas Trump supporters will remember this when Trump demonizes “dishonest” reporters and “fake news.” But The New York Times has also shown us the weaknesses of establishment media that, for all their great reporting, continue to wait for Trump to act like a president—and even to inaccurately suggest he’s finally doing so. On Monday, a widely criticized Times story that depicted the president as “anything but disengaged” had to be repeatedly rewritten, and its headline changed, to dampen the tone of cheerleading. On Tuesday, the normally savvy Glenn Thrush wrote about Trump’s “reclaiming” his power to unify—as if he ever used his power to unify anyone but those in his base. Esquire’s Charles Pierce said its lead “may be the single wrongest sentence in the history of wrongness, and of sentences.”

I think a lot of us take solace from these images of neighbor helping neighbor, so different from the shots of white supremacists with tiki torches and violent neo-Nazis that have dominated our televisions this summer. We are “stronger together,” as one now-retired politician tried to tell us, roughly a year ago. We also need government at a time like this—and Texas is going to need a lot of it. Louisiana’s Democratic Governor John Bel Edwards has sent rescue workers and equipment to his neighbor next door—but he might need it back right away, as New Orleans copes with new flooding. It’s worth remembering: Trump has no Homeland Security chief, no head of the National Hurricane Center, and his budget proposed an 11 percent cut to FEMA. Is there any chance this disaster will force a reckoning with the scale of massive storms that are being worsened by climate change—and the fact that we’ve had three “hundred-year storms” (actually, Harvey is said to be a 500-year flood) in 12 years. It may be that Texas being a Republican state will help leverage federal resources. Governor Greg Abbott is promising the recovery will be “Texas style—better than ever.” But will “Texas style” ever reflect respect for the land and the water, for safety over developers’ profits, for the truth about climate change over petrochemical-industry propaganda? We can dream

As we saw with Katrina, Harvey is hitting poor Houstonians of color the hardest. They tend to live closer to the petrochemical plants and thus the water in which they are trapped is more dangerous. The man often called “the father of the environmental-justice movement,” Texas Southern University sociologist Robert Bullard, told The Huffington Post these are “sacrifice zones.”

“They not only have to deal with flooding in their homes, but pollution in water that’s contaminated when water floods refineries and plants,” Bullard said. “You’re talking about a perfect storm of pollution, environmental racism, and health risks that are probably not going to be measured and assessed until decades later. The fact is that laissez-faire, unrestrained capitalism and lack of zoning means people with money can put protections up, and people without can’t.”

I’ve found myself wondering if this will change Houston demographically the way Katrina changed New Orleans. Houston was one of the few progressive success stories from last November, with a strong movement on the ground and genuine organizing that’s changed the power structure. Will some of Houston’s low-income residents wind up scattered to distant Texas cities and unable to return? We won’t know that for a while. All we know right now is that a great American city is asking for, and getting, the support of state, local, and federal government, along with the kindness of neighbors to accomplish an unprecedented rescue operation. The entire Gulf storm has claimed only nineteen lives so far. These multiracial rescue teams, whether they’re government responders or volunteers, show us living up to our highest values. Air Force One took off after a two-hour visit, and Texas went back to work.