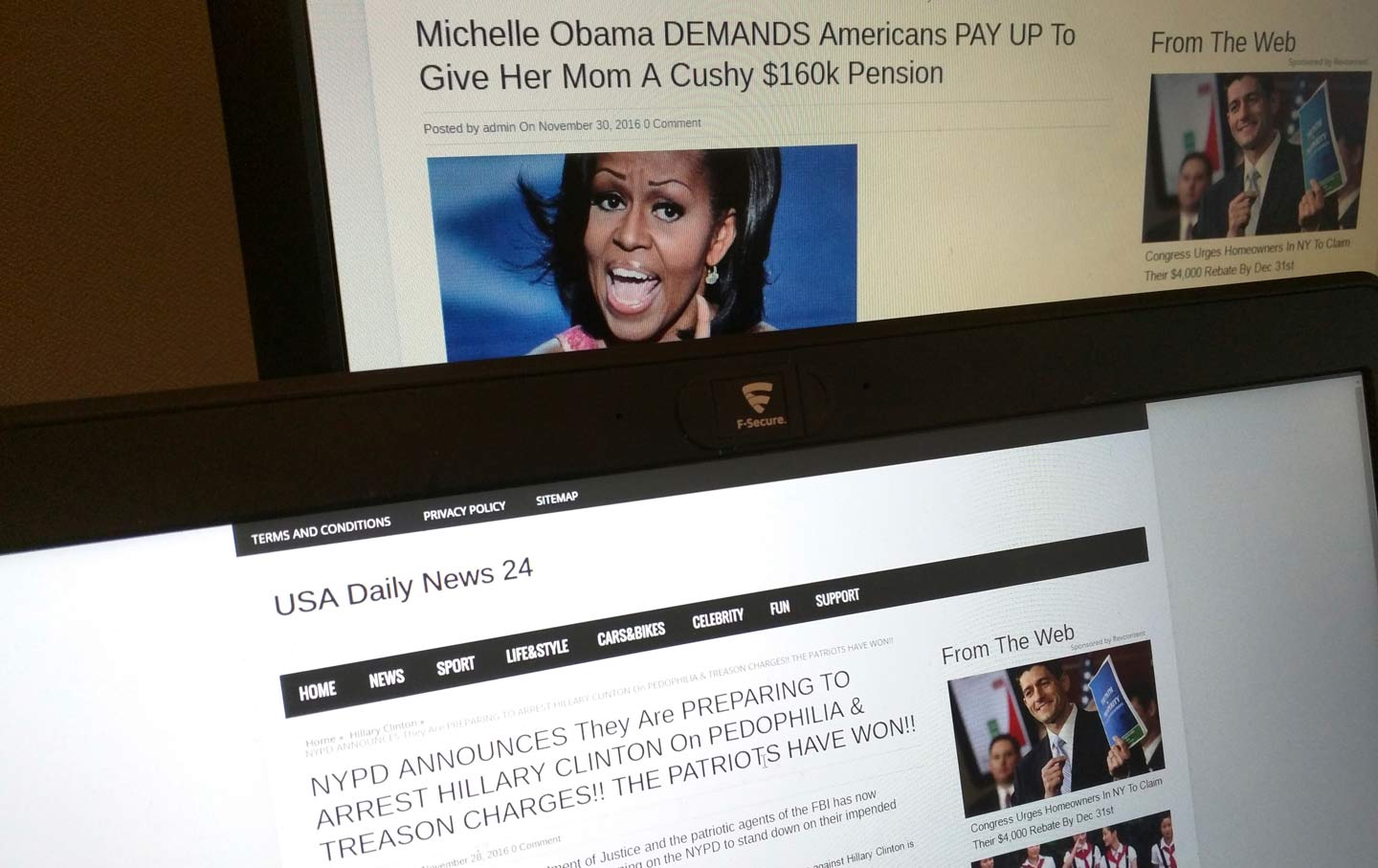 Like “terrorism” and “WMD” before it, “fake news,” through sheer repetition of the conceit, is now officially a thing. Something to be combated. Something we must all get behind and destroy. Since the election—and to an extent right before it—the scourge of fake news as a unique, distinct, and morally urgent threat to our democracy has been thrust upon the public. In this discussion the primary focus has been how, not if, we stop it. “Officials” are “worried” and “governments” are “looking into” curbing the “epidemic.” Hillary Clinton emerged Thursday for the first time since her concession speech to warn that “lives are at risk” over fake news and that the “danger” must be “addressed quickly.” Everyone’s on board: Fake news must be stopped.

But what exactly is “fake news”? The reality is, no one seems to know. Or, at least, those who have publicly attempted to define the “phenomenon” have failed spectacularly at it. Obvious examples of fake stories are easy to find: the “Pizzagate” theory that resulted in a North Carolina man opening fire at a DC-area restaurant after online rumors spread the owners were running a child-sex slavery ring connected to the Clintons; the pope endorsing Donald Trump; Hillary Clinton snuffing out FBI agents. These are all manifestly false stories being cited as examples of the scourge of fake news. But from here, many in the media and nominally independent research groups have pivoted to a much broader, far more pernicious definition of what is and isn’t “fake,” with little notice.

Over the past month, three separate lists of “fake news” websites—boosted and shared by major media outlets, journalists, and pundits—have gone viral, despite the fact that all three lists included legitimate outlets well within the mainstream. These “fake news” outlets include RawStory, Consortiumnews, Crooks and Liars, Antiwar.com, naked capitalism, Truthout, and Truthdig. Several of these outlets are presently threatening a lawsuit against the most egregious peddler of fake news lists, PropOrNot, an anonymous group of researchers whose blacklist The Washington Post credulously vouched for with little care or consideration.

Ironically, in this panic, editorial standards have fallen in inverse proportion to the fear of fake news. The most heavily criticized “fake news” list, by PropOrNot, was promoted by The Washington Post in a story about how the Russian government purposefully “echoed and amplified” right-wing fake news sites to influence the presidential election. The piece, which was shared by dozens of high-profile names—such as Robert Reich, Joy-Ann Reid, and Jonathan Weisman—stated that PropOrNot had identified “more than 200 websites as routine peddlers of Russian propaganda during the election season.” As The Intercept was quick to point out, PropOrNot’s blacklist included “WikiLeaks and the Drudge Report, as well as Clinton-critical left-wing websites…[and] libertarian venues.”

In a subsequent interview, a researcher from PropOrNot advanced the bizarre theory that Russian President Vladimir Putin had Labor MP Jo Cox killed in some type of “Manchurian candidate” plot. When asked by The New Yorker’s Adrian Chen why they chose to remain anonymous, the PropOrNot spokesperson evoked Cox, insisting that “Russia uses crazy people to kill its enemies.” While many who legitimately think fake news is a problem have sought to distance themselves from PropOrNot as a cooky one-off, the speed and scope with which their absurd list was spread—and the complete lack of skepticism on display when this is done—shows how much of this story is a problem in search of evidence. Standards were lowered when vetting PropOrNot because the reporter and editors and those who spread the story needed it to be true. The plague of Fake News had to be addressed and the market for newsy, empirical collateral that reinforced this narrative was in high demand.

The scale of the problem is also often misunderstood. Probably the most cited article on the scope of the fake news issue is a BuzzFeed piece from November 16 that showed fake news “outperformed” real news on Facebook in the runup to the election. BuzzFeed showed that the top 20 fake news stories garnered more social media engagements on the site than the top 20 real news stories. The problem with the ambiguous framing is that many took it to mean that people, in the aggregate, engaged with more fake news than real news—which isn’t at all the case. Executive Director of Human Rights Watch Kenneth Roth, for example, breathlessly tweeted out, “As US election progressed, fake news engaged Facebook users more than real news.” But this isn’t remotely true; it can’t be, since real news outlets produce far more content than fake ones do. To interpret this report to mean fake news engaged Facebook users more overall is like saying the Dallas Cowboys scored more points than the Chicago Cubs did runs in 2016 by taking their top three games and adding up the totals. While it’s true in this limited scope, overall the Cubs played 163 more games and have thus scored far more on the whole. Indeed, the BuzzFeed article itself notes in the very last line that “large news sites overall see more engagement on Facebook than fake news sites.” But this not how journalists and outlets framed BuzzFeed’s findings.

The types of fake news people usually cite, broadly speaking, fall into three categories: (1) outright fabrications (the pope endorsing Trump), (2) deliberate political propaganda (how many view Russia Today), and (3) political clickbait that isn’t entirely true nor is it necessarily part of a foreign scheme. It’s the casual conflation of (1) with (2) and (3) that should raise alarm for those who value the free flow of ideas and information. Take, for example, a recent BuzzFeed piece on “US intelligence officials” expressing concern that Russia steered fake news in the buildup to the election. The headline of the piece and intro vaguely address the problem of “fake news” (without, it should be mentioned, citing one example of a fake news story Russia was behind); then it drops the “fake news” hook about one-third in and moves on entirely to “Russian propaganda”—neither a new or unique threat.

CNN’s breakdown of the problem of “Russian fake news” likewise goes back and forth from “fake news” to routine propaganda and disinformation. A Guardian rundown of the “insidious trend” of fake news around the globe casually switches from deliberate lies to vague notions of misinformation when it suits the writer’s thesis:

Samuel Laurent, head of Le Monde’s fact-checking section, Les décodeurs, said: “In France, there isn’t a wide presence of totally invented fake news that makes money through advertising, as seen in the US.” But he said France was seeing increasing cases of manipulation and distortion, particularly during election periods.

But wait. The story is about the “insidious trend” of fake news. Now it’s about something else entirely different, something that, again, is neither new nor on topic.

This water muddying isn’t happening in a vacuum either. Those wanting to proceed with plans to curate and monitor information online—a long held impulse of all governments—are using the specter of “fake news” as a PR bludgeon to justify these broader efforts. On November 29, The Washington Post’s David Ignatius relayed that the US State Department was working on plans to protect “the truth,” including floating the idea of a “global ombudsman for information.” BuzzFeed reported that Congress, in the context of combating Russian fake news, will soon bring back the Cold War–era Active Measures Working Group, originally set up in concert with the CIA and the Defense Department to combat Soviet disinformation.

The troubling effects of such efforts, as anyone who’s operated outside the mainstream of acceptable political opinion will tell you, cannot be overstated. One reason so many blue-checkmark pundits reflexively share fake-news blacklists—despite them having numerous false positives—is because they, themselves, have never held an opinion that veers too far off the editorial page of The New York Times. But it’s those opinions, those that push back against Official Truths, that are likely to get caught up in otherwise good-faith attempts to counter deliberate lies. With such a broad charge, “the cure for fake news,” Politico’s Jack Shafer notes, may be “worse than the disease.” In theory, building mechanisms to weed out outright lies is good, but the speed and broad scope of the fake-news fervor reveals that these efforts are easily hijacked, co-opted, and fudged not to protect truth but to curate it. Not to stop the spread of outright lies but to label websites deemed outside the mainstream with a scarlet letter. Given that some of the most public and viral attempts to build such systems have failed at making this crucial distinction, perhaps before attempting to solve the problem of fake news we should, at least, try to figure out what exactly it is.