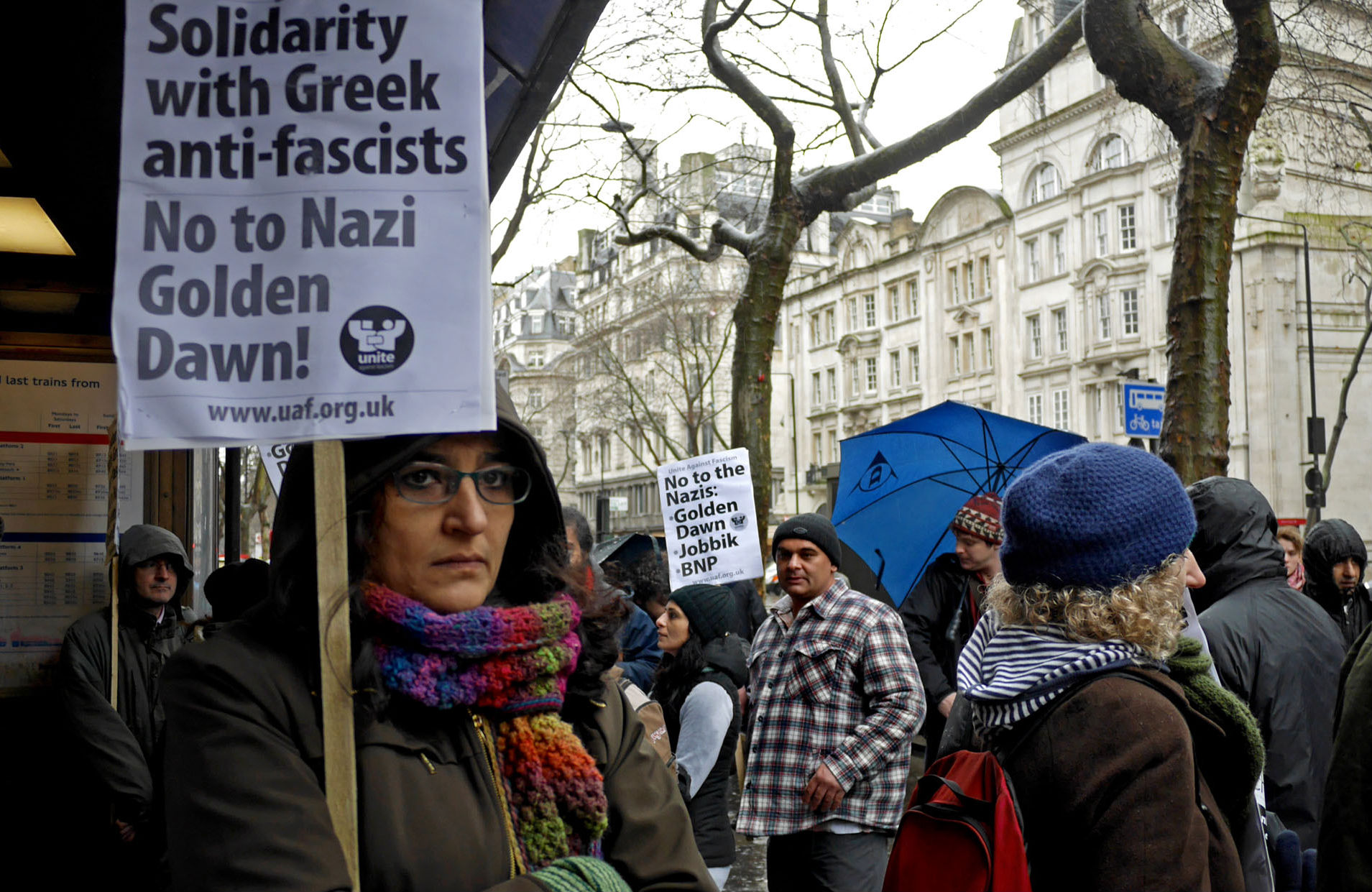 Now that the dust has settled from the recent elections for the European Parliament, it is time to take a deep breath and see what really happened.

No, Britain is not about to toss its immigrant population into the sea. No, France’s Marine Le Pen is not about to march on the Elysée Palace. And as repulsive as the thugs of Hungary’s Jobbik Party and Greece’s Golden Dawn are, it was the continent’s left to whom the laurels went in last month’s poll.

Parties that targeted unemployment, austerity and the growing wealth gap in Europe did well. The dramatic breakthrough of right-wing, racist and xenophobic parties in France, Britain and Denmark had less to do with a neo-Nazi surge than with the inability or unwillingness of the mainstream parties in those countries to offer a viable alternative to a half-decade of economic misery.

Indeed, if there was a message in the May 25 EU elections, it was that those who trumpeted austerity as the panacea for economic crisis were punished.

In contrast, where there was a clear choice between economic democracy on the one hand and “let’s blame it on the immigrants and Roma” on the other—as in Greece, Spain, Portugal, Ireland and most of Central and Eastern Europe—voters went left. As Srecko Horvat, Croatian philosopher and author of What Does Europe Want?, commented in the wake of the election, “The European left is back in the game.”

“Earthquake” was the metaphor most used in describing the triumphs of Marine Le Pen’s National Front in France, the United Kingdom Independence Party (UKIP) in Britain and the Danish People’s Party in Denmark.

But if there was a result that shifted the foundations of Europe, it was the victory of Greece’s Syriza Party and the “out of nowhere” appearance of Podemos—“we can”—in Spain.

Syriza emerged from the wreckage inflicted on the Greek economy by the so-called “troika”—the International Monetary Fund, the European Central Bank and the European Commission. For the price of a bailout—most of it siphoned off by big European banks—the Greek government instituted massive layoffs; made huge cuts in pensions, healthcare and education; and privatized government-owned property. The jobless rate rocketed to 28 percent—over 50 percent for young people—and millions of Greeks were impoverished. While Greece’s creditors did well, the austerity did nothing to turn the depressed economy around.

Syriza took 26.5 percent of the May 25 vote to become the biggest party in Greece. That figure, translated into a general election, would net the party 130 seats in the 300-seat Greek Parliament. In contrast, the two governing parties that oversaw the austerity program lost over 10 percentage points between them.

Much of the media focused on the neo-Nazi Golden Dawn Party, which won 9.4 percent of the vote—a 2.4-percent jump over their 2012 showing. Golden Dawn will send three representatives to the European Parliament, where the Greek left will swamp their representatives.

While Syriza focused on the Greek domestic crisis, it also consciously attached itself to other left-leaning anti-austerity movements throughout the continent. “What happened in Greece is not a success story but a social tragedy that shouldn’t be repeated anywhere in Europe,” Syriza’s leader Alexis Tsipras said during a debate among candidates for the post of European Commission president.

That “anywhere in Europe” resonated in other countries entrapped in the troika austerity formula or struggling to emerge from stagnant economies and long-term unemployment. Besides Greece, the most conspicuous example was Podemos in Spain.

Podemos came out of the massive anti-austerity rallies that paralyzed Madrid and other Spanish cities in 2011, and which impelled similar demonstrations in Europe and the United States, including the Occupy Wall Street movement. Podemos, says its leader Pablo Iglesias, is “citizens doing politics. If the citizens don’t get involved in politics, others will. And that opens the door to their robbing you of democracy, your rights, and your wallet.”

The Spanish party consciously modeled itself on Syriza, not only in program, but also in its grassroots, bottom-up organizing tactics. While Podemos has only been in existence four months, it took 8 percent of the vote nationwide and 11 percent in Madrid. With the Podemos showing added to the success of left parties in Catalonia, Valencia and the Basque Region, plus the votes for the Spanish Green Party and the Socialist Party, Spain’s ruling right-wing People’s Party is now a decidedly minority organization.

That pattern was repeated in several other countries.

In Ireland the two parties that oversaw the austerity program—Fine Gael and Labour—dropped 16.5 points and 12.5 points respectively, while left and independent parties like Sinn Fein, the Socialist Party and People Before Profits, cornered 45 percent of the vote.

The anti-austerity Portuguese Socialist Party defeated the center-right coalition that has overseen the troika’s recipe for Lisbon, and the Portuguese Communist Party took 12.7 percent of the vote.

Italy saw the center-left Democratic Party emerge as the number-one political force in the country, with 40 percent of the vote, while Beppe Grillo’s angry and iconoclastic—but program-light—Five Star Movement took a beating, coming in at 21.2 percent. Former Prime Minister Silvio Berlusconi’s right-wing Forza Italia took third at 16.8 percent. And a Syriza look-alike, L’Altra Europa (the “Other Europe”), garnered a respectable 4 percent and three seats in the European Parliament after only a few months campaigning. In contrast, the much older and established racist Northern League lost four seats and took an anemic 6.2 percent of the vote.

In Slovenia the United Left won 5.9 percent of the vote, which in a general election would have given the party six seats in Parliament.

The extreme right Party for Freedom in the Netherlands lost two seats, and Finland’s right-wing Finns Party dropped from the 19 percent it scored in 2011 to 13 percent.

The Right Rears Its Head

Not that it was all sweetness and light.

Hungary’s neo-Nazi Jobbik took 14.7 percent of the vote, but that was an almost six-point drop from what the party received in last month’s general elections. Poland’s reactionary Congress of the New Right jumped from 1 percent in the 2011 general elections to 7 percent, and Lithuania’s conservative Order and Justice Party scored 14.3 percent. The anti-immigrant New Flemish Alliance won in Belgium, and Austria’s Freedom Party came in third, with 19.7 percent of the vote. However, right-wing parties like Ataka in Bulgaria, the Greater Romanian Party and the Slovak National Party all lost voters.

The right won parliamentary seats in ten out of the twenty-eight EU countries—and increased its representation in six of those countries—but also lost seats in seven other countries.

The triumphs of the National Front in France and the UKIP in Britain are certainly worrisome. Both ran virulent, anti-immigrant campaigns, and the Front in particular has long been associated with anti-Semitism and anti-Roma ideology.

It would be a mistake, however, to assume that everyone who voted for the two parties share their penchant for ethnic hatred. Some of that support was indeed racist, but the parties also tapped into voter anger over the economic policies of the EU that have kept both countries locked into near-recession conditions.

The “traditional” left in the two countries—the Socialist Party in France and the Labour Party in Britain—have gone along with some of the troika’s austerity measures, and have also been sotto voce about immigrant bashing. The absence of a serious left critique of EU policies in both countries let many people surrender to their dark side and buy the fable that immigrants have swamped the job market and plundered social services—especially since many of the rightist parties opportunistically adopted anti-austerity planks.

It was a pattern that played out elsewhere as well. In Denmark, for instance, the center-right Venstre Party campaigned on denying welfare benefits to immigrants, hardly a platform to contrast itself with the far-right Danish People’s Party.

A Better Solution Than Hate

Politically, the continent has rejected the troika’s strategy, much as Latin America did in 2000. “We are opposed to everlasting austerity as a means for fiscal rebalancing on both pragmatic and ideological grounds,” says Syriza’s Tsipras. “The subjugation of democratic process to the markets was the reason why we have the crisis today.… We predicted from the onset” that “austerity-based policies would backfire.”

The trick now will be to pull the various left forces together to hammer out an alternative. Podemos’s Iglesias has declared that the Spanish party intends to work “with other parties from Southern Europe to say that we don’t want to be a colony of Germany and the troika.”

Syriza has already proposed a European summit modeled on the 1953 London Debt Agreement, which canceled 50 percent of Germany’s World War II debt and spread out payments on the rest over thirty years.

As for the so-called “earthquake” on the right: the neo-Nazis and immigrant bashers will make a lot of noise, but they offer nothing but hate as an economic solution. The left has a better one, and they are back.