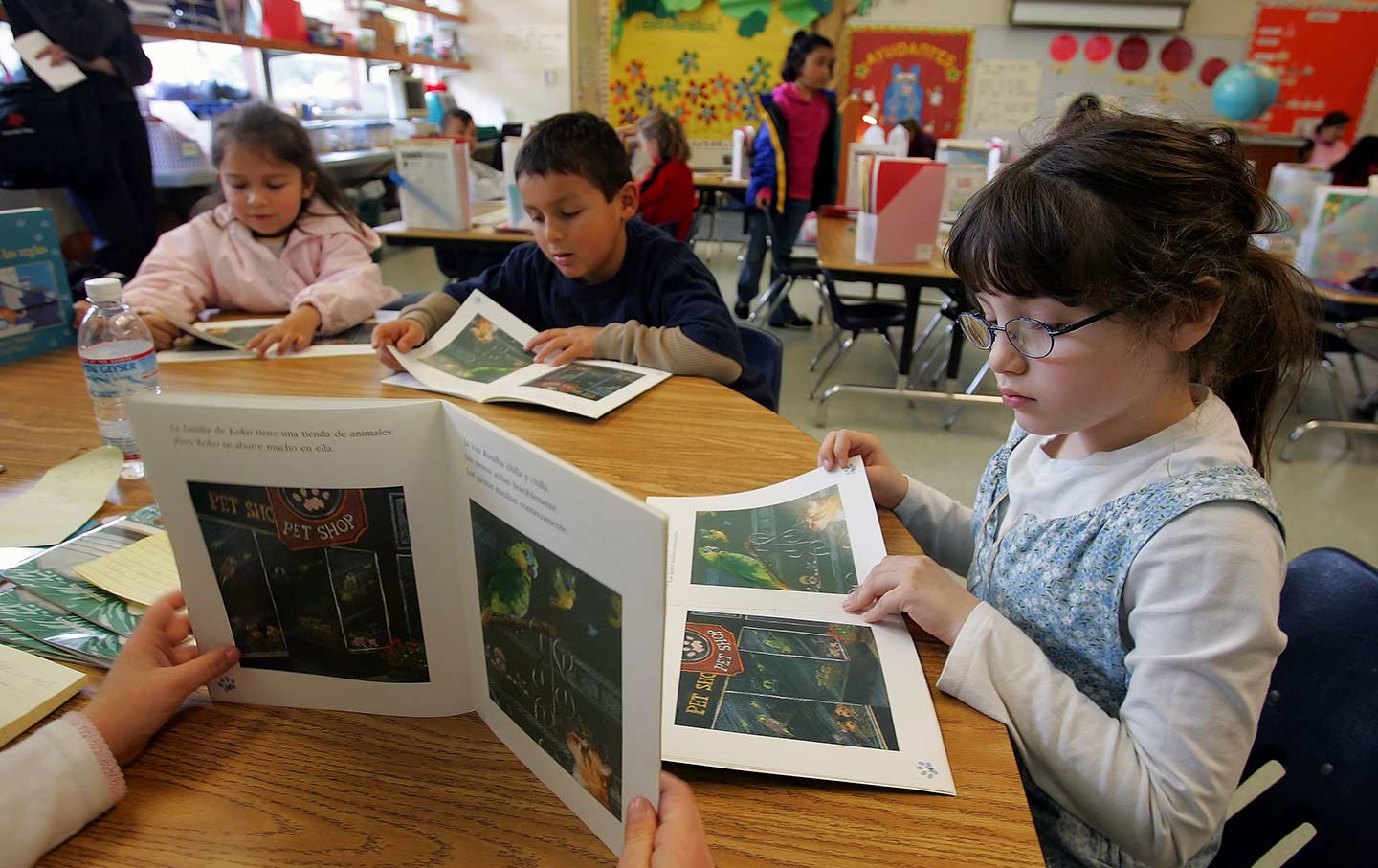 This piece was published in partnership with Student Voices, a nationwide network of high school student writers and activists. The author is a junior at North Hollywood High School.

It’s easy to forget that the United States has no official language. Practically everything we read or hear is in English, to the point where it becomes the sine qua non for all interactions in our lives. For a country as diverse as ours, it’s easy to imagine how this presumption of monolingualism can make the lives of many confusing and difficult. And English-language learning students, especially, should receive an equal education regardless of their level of fluency.

Speaking from experience, learning a language that you don’t use at home is difficult. Growing up, I remember how I could understand everything in Koreatown, only to lose myself in a world of gibberish outside the neighborhood. I eventually learned to speak English fluently, but that took concerted teaching and specialized care—and watching TV. A variety of Saturday morning cartoons allowed me to approach the language at a pace I could handle. Little by little, I was eventually able to overcome the hurdles of comprehension to be here now to write this article.

Despite the stereotypes of what being an English Language Learner (ELL) looks and sounds like, ELLs make up a diverse group of people united simply by the fact that they are in the process of learning English. ELLs—different from ESL (English as a Second Language), which refers to the type of instruction ELLs receive—are students who are learning English as well as the other areas of study that their peers are. Sometimes ELLs are pulled out of the classroom for individual or one-on-one language lessons. But ELLs are also frequently included in their primarily English-speaking classrooms through accommodations in lessons and instruction. Just as much as we provide a sound education to any other student, we should provide people new to English the same resources. In 1974 the Supreme Court decided unanimously in Lau v. Nichols that the lack of ESL education was in violation of the Civil Rights Act of 1964. Yet, as the number of ELLs grow, it is time for a national conversation about how we to properly honor these civil rights established by not only our legislative body but also the highest court in the country.

Coming from Los Angeles, the school district with the most ELLs in the country, I believe that the current funding being allocated for students in the process of developing their English skills is simply not enough. From experience alone as an ELL high school student, I can tell that there is an issue: Throughout my entire schooling experience, I can count on one hand the number of teachers who taught ELLs. And yet among the national student population, nearly 10 percent are comprised of ELLs.

In fact, for that 10 percent, less than 1 percent of teachers are actually qualified to teach them English as a Secondary Language. Those numbers aren’t improving as the years go by. It’s scary to consider what it means going forward.

ELL teachers play an important role beyond the classroom. They are the bridge between the student and a country they are expected to navigate. For that very reason, more than any other group at school, their success lies with their understanding of English. Although we may take it for granted, the proficiency of English literacy has been shown to correlate, on an international level, with salaries and standards of living. Considering the impact it has on a world where a fifth of its population speaks English, imagine its impact on a national level, where 80 percent of the country speaks English.

My father was one of many ELL students who found a way to succeed through his linguistic ability. Although he came up from the “bad side” of town, as he says, he found his way into a job and new life because he was an ELL student—in an increasingly globalized world, the ability to speak two languages has become attractive to employers looking to expand, and because he was an ELL, my father had that skill.

ELLs have the power to be a crucial part of the workforce of our country. Much as we expect others to learn English to work with us, the rest of the world can rightfully expect the same for their own language; this kind of international cooperation begins with a connection, one that a shared language inspires. And we have an incoming generation of bilingual employees ready to be that very connection.

At the end of the day, it is up to us to tell our government to change the way our country is heading. ELLs should have the right not only to learn the language but also to ensure their future stake in this country that they have called home. Regardless of the costs involved, we are simply upholding the rights guaranteed to these students—students who, regardless of their origins, are people trying to learn and support themselves.