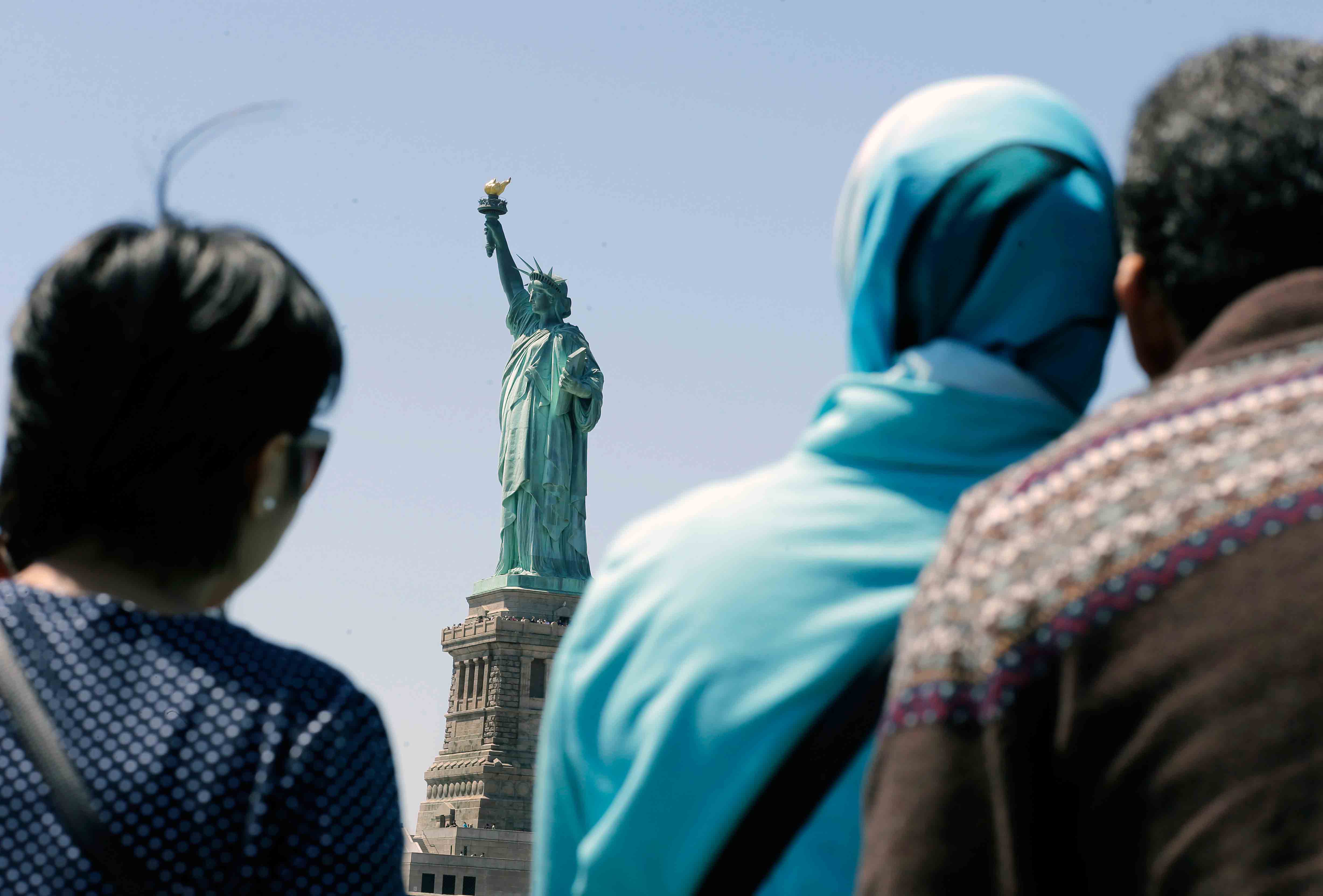 People look at the Statue of Liberty from a ferry in Jersey City, New Jersey. (AP Photo / Mel Evans, File)

Ken Cuccinelli, the failed Virginia gubernatorial candidate who has been given the unenviable task of promoting the Trump administration’s latest plan to discriminate against immigrants, has stirred some controversy with his crude rewrite of “The New Colossus.” But in doing so he has invited Americans who care about our history to recall the radical inspiration and intent of the Emma Lazarus poem that is so intertwined with the Statue of Liberty.

Cuccinelli, the acting director of US Citizenship and Immigration Services, appeared this week on NPR’s Morning Edition to argue for new “public charge” policies that would make it easier to reject visa and green card applications from working-class immigrants who might need public benefits at some point in the future.

NPR’s Rachel Martin asked Cuccinelli a good question: “Would you also agree that Emma Lazarus’s words etched on the Statue of Liberty, ‘Give me your tired, give me your poor,’ are also a part of the American ethos?”

It was Cuccinelli’s reply that raised the eyebrows of those who know the story of Lazarus and her poem. “They certainly are: ‘Give me your tired and your poor who can stand on their own two feet and who will not become a public charge,’” he answered, reworking not just the words but also the intent of the poem. Cuccinelli then added, “That plaque was put on the Statue of Liberty at almost the same time as the first public charge was passed—very interesting timing.” Very interesting, indeed.

Emma Lazarus was raised in a prominent New York family that had roots in the city going back to long before the American Revolution. She was well-educated and well-established in the city of her birth. She had experienced success as a poet and traveled in the circles of the intellectual and literary stars of her time. She was, as well, an activist who championed the radical reform movement led by political economist Henry George. She embraced George’s campaigning, as an author and a candidate for mayor of New York, to alleviate poverty and address economic inequality.

George argued for public ownership and land reforms that would spread the wealth. His was a moral call to arms that influenced generations of radicals and reformers. “More is given to us than to any people at any time before; and, therefore, more is required of us,” argued George. “We have made, and still are making, enormous advances on material lines. It is necessary that we commensurately advance on moral lines. Civilization, as it progresses, requires a higher conscience, a keener sense of justice, a warmer brotherhood, a wider, loftier, truer public spirit. Falling these, civilization must pass into destruction. It cannot be maintained on the ethics of savagery.”

Lazarus was inspired by George’s argument that justice could best be achieved by aiding and empowering “the men and women who are at the very bottom of the social scale. In securing the equal rights of these we shall secure the equal rights of all.” She took a particular interest in the circumstance of the immigrants who were arriving in New York in the late 1870s and early 1880s. As a descendant of some of the first Jews to settle in the city, she was moved by the condition of Jewish immigrants who were fleeing pogroms and anti-Semitic violence in Eastern Europe.

Lazarus did not believe it was appropriate to turn away newcomers because they lacked professional skills or degrees. She understood that the United States needed to be a haven for the oppressed, not merely as an act of moral duty but as an embrace of progress. Those who were welcomed at the golden door, and who were provided with education and assistance, Lazarus believed, would make the United States a dramatically greater nation. This was a controversial view, in her day as in ours. Yet it was the view she expressed in “The New Colossus,” a poem written as part of a fund-raising drive to pay for the Statue of Liberty’s pedestal—a poem that, as James Russell Lowell explained, gave French sculptor Frédéric Auguste Bartholdi’s La Liberté éclairant le monde (Liberty Enlightening the World) its raison d’être.

In doing so, she helped to shape an American ethos that Donald Trump and Ken Cuccinelli now seek to rewrite. But the original statement was the right one, the one that made the Statue of Liberty what Paul Auster saw: “a symbol of hope to the outcasts and downtrodden of the world.” It must remain so, just as “The New Colossus” must remain the poem, and the statement, that Emma Lazarus intended:

Not like the brazen giant of Greek fame,
With conquering limbs astride from land to land;
Here at our sea-washed, sunset gates shall stand
A mighty woman with a torch, whose flame
Is the imprisoned lightning, and her name
Mother of Exiles. From her beacon-hand
Glows world-wide welcome; her mild eyes command
The air-bridged harbor that twin cities frame.
“Keep, ancient lands, your storied pomp!” cries she
With silent lips. “Give me your tired, your poor,
Your huddled masses yearning to breathe free,
The wretched refuse of your teeming shore.
Send these, the homeless, tempest-tost to me,
I lift my lamp beside the golden door!”