A man walks along the top of the border stucture separating Mexico and the United States, 2018. ( (Photo by Gregory Bull / AP)

Sometimes a national conversation, no matter its constant news coverage, remains—at least for those not directly affected—in the realm of abstraction. But then, after a photograph, video, or audio clip reveals the human impact, “the darkness is suddenly ripped” open, and the story hits home. That’s what happened last summer when ProPublica released audio of wailing children, recently separated from their parents, being laughed at by Border Patrol agents. It’s what happened last November when a photographer caught a Honduran woman desperately hustling her two daughters away from tear gas launched by border agents in Tijuana.1

Sometimes a novel can rip open that darkness, too, though the illumination happens on a different timeline. Mexican novelist Emiliano Monge—the ripped-darkness phrase is his—has done exactly that with his newly translated novel, Among the Lost. But illumination is not without its own complications: To read Among the Lost is to be trapped in, to borrow another Mongian phrase, a “cage of light”—a Goyaesque picture of the Central American exodus, and the horrors some migrants pass through along the transit routes in Mexico.2

In Among the Lost, Monge tells the love story of Epitafio and Estela, a cruel and morally bankrupt Mexican couple, whose job is to capture, smuggle, sell, and sometimes enslave migrants passing through southern Mexico. Transporting the latest group, they’re separated from each other while finding a way around a military checkpoint. As the couple struggle to reunite, competing smugglers try to steal their cargo and kill the lovers, and the reader is basically guided through a humid hellscape of backstabbing, plotting and counter-plotting, and wanton disregard for human life.3

If that sounds sensationalist or overwrought, the fictional elements are grounded by the much scarier snippets of actual testimony that Monge gathered from Central Americans as he traveled the migrant trails while researching the novel. In brutal detail, their testimonies describe a pervasive sense of panic. Braided throughout the text, and competing for raw emotional impact, are also quotes from Dante’s Divine Comedy. Below is my conversation with Monge, edited for clarity, in which we discussed his dramatic influences, politicians who should be kicked through the gates of hell, and the immigration crisis in Mexico and the United States.4

John Washington: What was it about Dante that made you want to bring his poem into your text about migration?6

Emiliano Monge: It’s a question I asked myself a lot during the conception of this novel. Of course, there’s a lot of influence from the Greek tragedies: There’s the chorus, which is made up of fragments of testimonies I collected along the southern border, which are in dialogue with The Suppliants and The Bacchae. But the text most central to the book is The Divine Comedy, and that’s for one basic reason: From my point of view, when a migrant leaves their country and begins the journey, what they’re doing is descending into hell. They lose aspects of their identity, their personality, their voice, sometimes their language, their religion, and, above all, their individuality. They are converted into a mass. And they are always guided by someone. A Virgil. But a much more malevolent Virgil.7 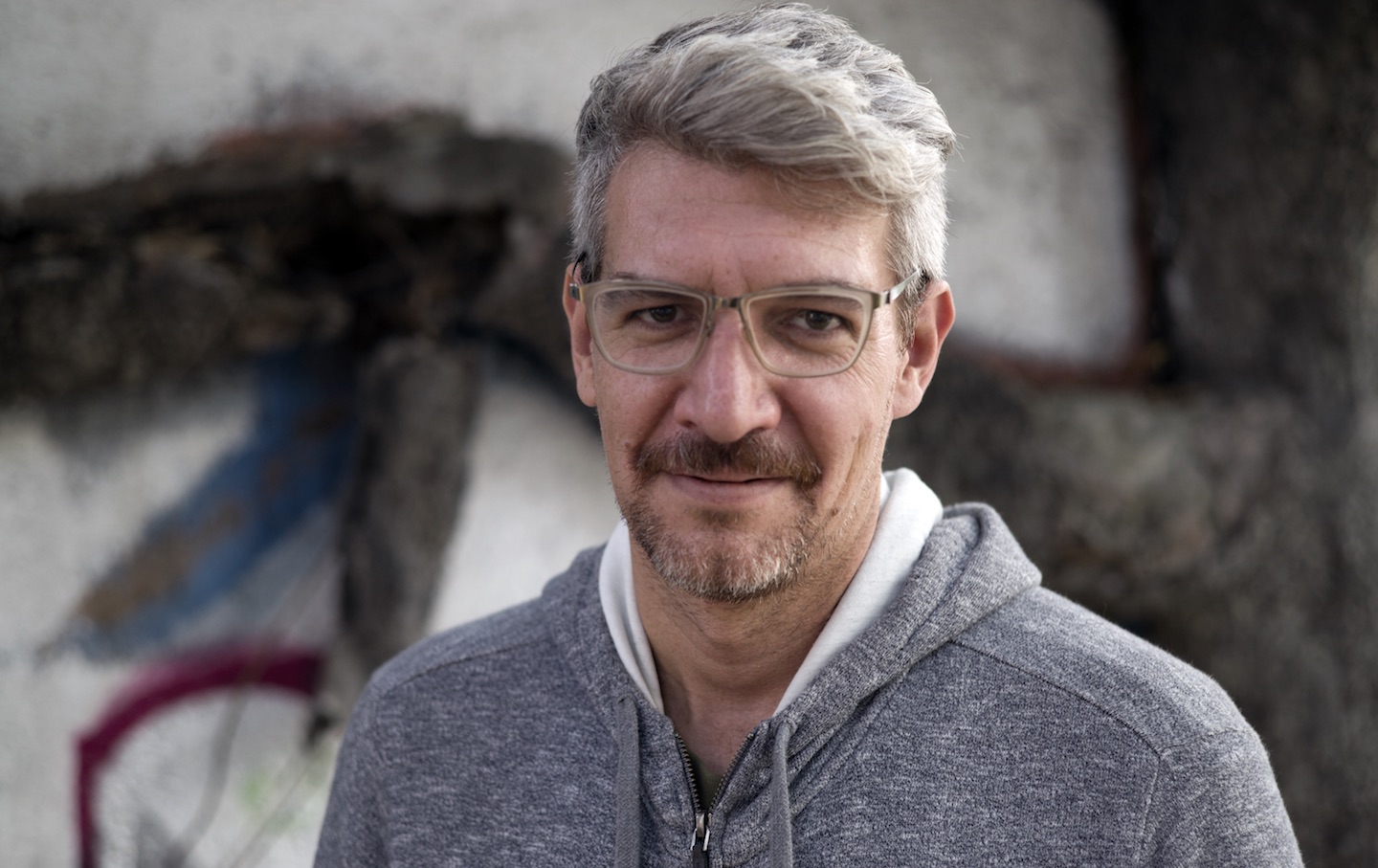 JW: Dante laced his poetry with cutting political satire, and placed a number of his contemporaries, including the Pope at the time, into different rings of hell. Did you imagine a place in hell for some of our contemporary politicians?8

EM: Better put, the question should be: Into which circle of hell are each of the neoliberal Mexican politicians heading? Because they all have their circles waiting for them. I’ll say this: Javier Duarte, the ex-governor of Veracruz, will go into the deepest of them. He didn’t only rob, embezzle, lie, and order the murder of journalists, he also swapped out chemotherapy injections for children with saline water to siphon off the extra funds. Can you imagine somebody more perverse?9

JW: The narrator of your previous novel, The Arid Sky, muses that he has finally “discovered how to tell this story so as to clear the poison from my system.” I’m wondering a bit about what you see as the role of a novelist in society. 10

EM: To me I find it important to remember that literature is also a vehicle to make visible certain ideas that were not visible before. And this goes well beyond just choosing a theme to write about. It’s about the choice of language: that which had been invisible is suddenly visible because it is called forth with a language separate from the language of power. This is what a writer should have as a minimal obligation: to write each text in opposition to the form and language of power. Dante did it, and he took it to the extreme. He wrote, for the first time, in the language of the streets.11

JW: What was your research process like? Did you bring Inferno with you as you trekked the migrant trails?12

EM: The development of this novel was quite odd. When I started, I was convinced I was going to write a play in the style of a classic tragedy (which is where the novel inherited the chorus lines, as well as the scenic development of its spaces—the truck trailer, the locked rooms, the safe house). Later, I realized that what I wanted, while centering the story on migration, was to write a novel and not a play. But for it to be a novel, I had to do a lot more research. That was when I started the fieldwork on the border. Finally, after getting a few hundred testimonies, I went back to shut myself in and work. There, in reading and rereading the testimonies, Dante and his Inferno started coming to me.13

JW: How did you decide to focus on the smugglers and the coyotes? I imagine the easier choice may have been to focus on the migrants. Despite the unforgivable brutality Epitafio and Estela engage in, was it important for you to offset that violence with a love story?14

‘“Are You Illegal?” I Will Never Forget Those Words.’

EM: I originally focused on two things: the migrants and what Mexico, or what we Mexicans, do to migrants, which goes from making them invisible to converting them into narco-slaves and forcing them into prostitution. In that sense I wanted to write about both parts of the tragedy. But, above all, I was interested in painting a complete portrait, exposing both the victims and the victimizers. Literature, I believe, is a portal to empathy, and empathy is one of the few means by which, as a society, we can dispose of violence. But to be empathetic with the victim is pretty easy. What’s truly difficult, what you need more courage for, is to find empathy for the victimizer. If we want to understand and change a pattern of systemic violence, we need to be empathetic toward both parties. I feel it’s really important to understand the victimizer in all his or her complexity: How is it that a man or a woman can kidnap and torture, and also love and protect their loved ones?15

Lastly, I found it critical to show how what separates the victim from the victimizer, especially in a place like the border between Chiapas and Guatemala, is mostly luck. They each grew up in similar places, with the same scarcities, with the same reality, and yet one migrates and the other exploits the migrant. That’s what a character like Mausoleo represents: taking on each role, showing how thin the line is between them.16

JW: Mausoleo is the “giant”—the large migrant coerced to work with the kidnappers and brutalize other migrants. Like many of the characters in this novel, Mausoleo’s story comes to a tragic, and quite gruesome, end. You seem drawn to drag your readers through some pretty gut-wrenching scenes. Is that you merely shoving reality in our faces? Or what do you see as the relationship between violence and storytelling? 17

EM: Mausoleo is basically a microcosm of the novel: the distance between kidnapper and kidnappee, and the switching from one to the other as a means of survival. This is what happens with a lot of migrants, who, besides migrating for a future, are escaping an often violent past. Effectively, violence is a theme you cannot escape in this novel, because it’s a theme you cannot escape on the migrant trails. And my intention was not to try to escape it, which is reiterated by the chorus. Just as the reader falls into the story, that story is interrupted by a migrant testimony, sort of a reminder that says, “Yes, this is a novel, but this is also what is happening in the real world, right now, even while you’re reading this.”18

JW: Did your work on this novel change your views on immigration or border politics?19

EM: Honestly, it’s horrible to be a witness to what’s happening now. What I tried to do is supplant the truth of something that was happening in real time with a verisimilitude that was just as complex as the real thing. And it turned out that the reality was identical to the verisimilitude I had created. This is something I don’t know how to process. I studied political science, and migration was always one of the topics that most interested me. There’s not one border today, between the first and the third world, where there isn’t an ongoing humanitarian crisis. What’s different now is that the borders are shifting. The Rio Grande and Trump’s immoral, disgraceful, and obscene wall has moved its focus south. As the fascist rhetoric of the Republican president will continue to point to his so-called foreign policy wins, we should also recognize the servile cowardice of the Mexican government, especially in Chiapas. Today, the wall is Mexico itself. It’s a wall that has, according to the Mesoamerican Migrant Movement, over the last 10 years led to the disappearance of nearly 70,000 migrants from Guatemala, Honduras, El Salvador, and Nicaragua.20