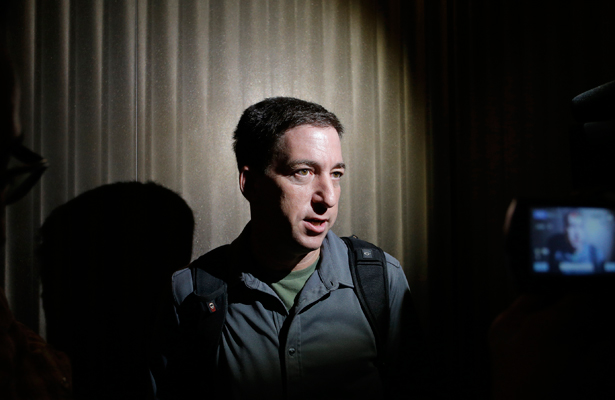 The tide is turning. Yesterday’s traitor is today’s hero, and the brave journalists who helped Edward Snowden get the word out are at last being honored for their public service. Or so one hopes.

On Sunday it was announced that the prestigious George Polk Award for National Security Reporting would be given to the four journalists—Glenn Greenwald, Ewen MacAskill, Laura Poitras and Barton Gellman—most active in reporting about the content of the NSA documents leaked by Snowden. The award, named after a CBS News correspondent killed in 1948 while covering the civil war in Greece, is intended to honor journalists who “heightened public awareness with perceptive detection and dogged pursuit of stories that otherwise would not have seen the light of day.”

That is, of course, the very purpose of the First Amendment’s guarantee of a free press, an indelible standard of freedom subverted by figures like James R. Clapper Jr., the president’s director of national intelligence, who condemned those reporters as “accomplices” to Snowden’s disclosures and suggested that telling the truth should be treated as a serious crime. Of course, Clapper’s own blatant lies to the Senate Intelligence Committee, denying mass-scale surveillance of the American public under his direction, are to be presumed virtuous.

In reality, the documents Snowden shared with the reporters from The Guardian, The Washington Post and other news organizations with well-established records of journalistic integrity were reported on in a manner that was mindful not to reveal the sources and methods used to ferret out terrorists. There is no evidence that this reporting has weakened the US government’s ability to protect the nation or that the NSA’s mass surveillance of the private communications of Americans has made us safer.

On the contrary, the Privacy and Civil Liberties Oversight Board, appointed by the president and confirmed by the Senate, concluded, after an exhaustive investigation in the wake of the Snowden revelations, that the NSA surveillance program should be ended, as it is ineffectual and dangerous to our freedoms. Defenders of the program, implemented under Section 215 of the Patriot Act, have argued that if that NSA program had been in operation, one of the 9/11 hijackers, Khalid al-Mihdhar, would have been caught because of a call he made from San Diego to Yemen. But the board concluded in its majority report: “We do not believe the Mihdhar example supports continuance of the NSA’s Section 215 program. First, the failure to identify Mihdhar’s presence in the United States stemmed primarily from a lack of information sharing among federal agencies, not a lack of surveillance capabilities. As documented by the 9/11 commission and others, this was a failure to connect the dots, not a failure to collect enough dots.”

When the suspicious call was made in early 2000, Mihdhar was living in San Diego with “a longtime FBI asset.” But Mihdhar—who was being tracked by the CIA as well as the FBI—was allowed to leave the country and return on his valid Saudi passport to hijack a plane “in 2001 because he still had not been placed on any watchlists.”

Even more damning is the conclusion of the report, vetted by the NSA, that the information on Mihdhar was readily available without the collection of metadata on most Americans:

But obtaining this knowledge did not require a bulk telephone records program. The NSA knew the telephone number of the Yemen safe house. If the telephone calls with Mihdhar were deemed suspicious at the time, the government could have used existing legal authorities to request from US telephone companies the records of any calls made to or from that Yemen number…. Thus we do not believe that a program that collects all records from US telephone companies was necessary to identify Mihdhar’s location in early 2000, nor that such a program is necessary to make similar discoveries in the future.

What is threatening about the Snowden leaks is not the exposure of effective tactics employed by the United States in the fight against terrorism but rather the Keystone Cops&endashstyle ridicule it has brought upon America’s claim of leadership in that effort. A case in point is the report coauthored by Polk winner Laura Poitras, a documentary filmmaker close to Snowden (and obviously one of the accomplices to whom Clapper was referring), that ran in Saturday’s New York Times.

In that latest installment from Snowden’s trove of government secrets that Americans had a right and need to know, it was revealed that the NSA, in cahoots with an equivalent Australian intelligence outfit, spied on the communications between an American law firm and the Indonesian government. In this instance there is not even a fig leaf of national security pretense because the issue being litigated concerned the import of Indonesian clove cigarettes and shrimp rather than the implements of violent behavior.

As with the previous revelation about the NSA’s taping of German Chancellor Angela Merkel’s cellphone conversations, it is clear that the scope of the spy agency’s surveillance is so vast as to be absurd in its claim to be a narrowly targeted intrusion to nail suspected terrorists.