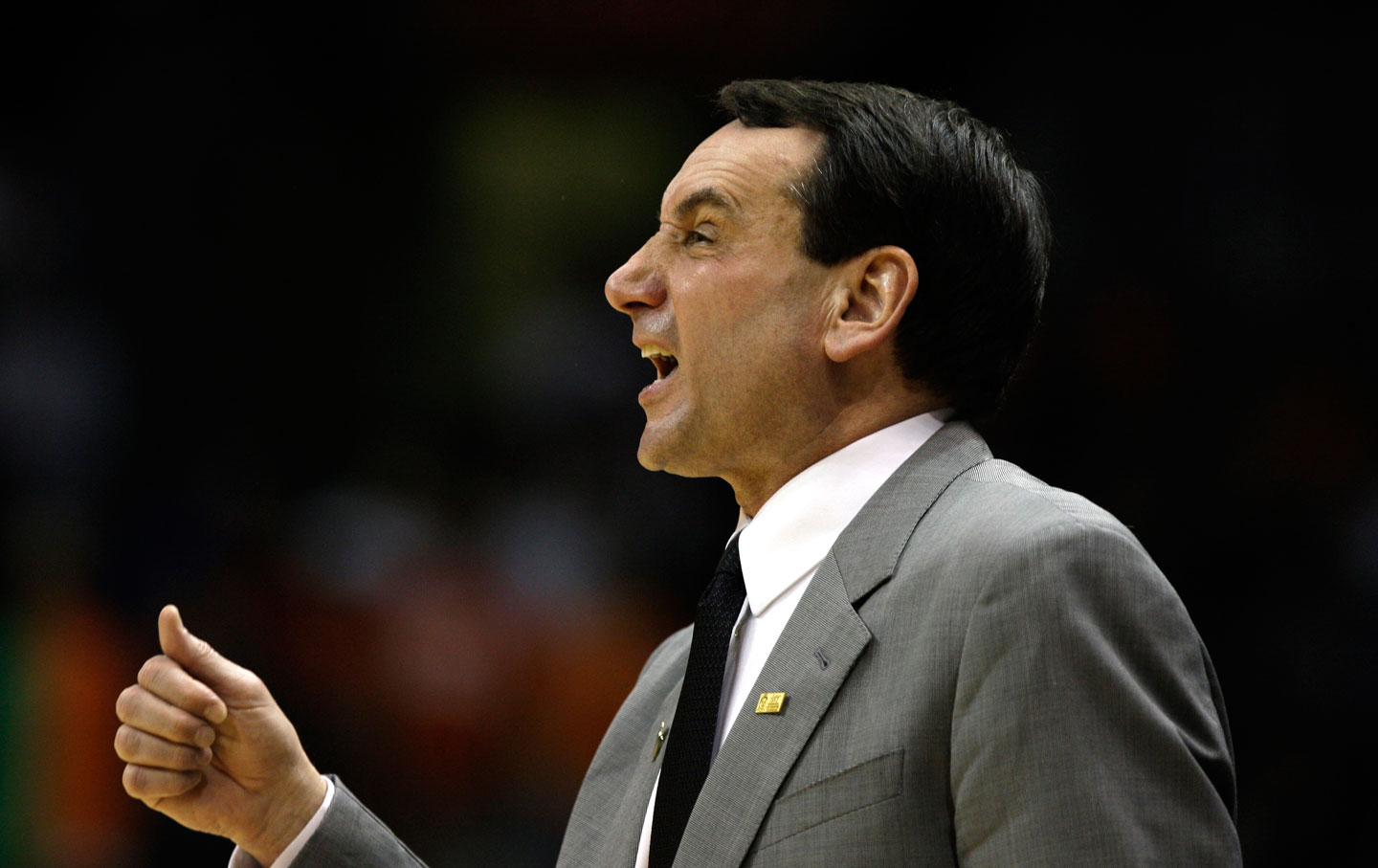 Editor’s Note: In the time since this article was published all four men’s Final Four coaches have released a joint statement endorsing the positions of the NCAA and their respective institutions on Indiana’s controversial religious freedom law.

The above words were said this morning by Duke University basketball coach Mike Krzyzewski answering the question about whether he would have anything to say on Indiana’s Religious Freedom Restoration Act, which in a post-Hobby Lobby Era, is already granting businesses the “freedom” to discriminate against the LGBT community. Coach K’s curt comment could probably best be described as a profile in cowardice. His school, Duke University had already issued a statement where they said,

“Duke University continues to stand alongside the LGBT community in seeking a more equal and inclusive world, and we deplore any effort to legislate bias and discrimination. We share the NCAA’s concern about the potential impact of the new law and will be vigilant to ensure that our student-athletes, supporters and indeed all citizens and visitors are treated fairly and with respect.”

In fact, every Final Four University as well as the NCAA has made similar statements. Beyond basketball in the world of sports, even NASCAR took a public stand and condemned the law. When NASCAR is making you look like a political quisling, it might be a time for a spinal readjustment.

To be clear, I am not arguing that Coach K should come out and stand with the LGBT community, if that is not what he believes. The man is a longtime Republican donor who in 2002 deeply upset people in Durham when he held a fundraiser on campus at the Duke Inn and called his party Blue Devils for Dole. In other words, Coach K has a number of options for how he could respond to this mushrooming controversy. He could support the school that pays him an annual $10 million salary and stand with their statement. He could support the NCAA, an organization whose artificial restrictions of what his players can earn has made him an incredibly wealthy man. He could even join the many Republicans in the state of Indiana who oppose the law and make an “I Stand With NASCAR” joke. Or Coach K could take a deep breath, hike up his big boy pants and say, “You know what? Duke and the NCAA and NASCAR are wrong. I support this law because I believe in God, freedom, and heterosexual florists. Oh, and gay weddings are overrated, and it’s about damn time America woke up to that fact!”

But instead, Coach K, like a certain fellow Nike pitchman, just gave us his version of “Republicans buy sneakers too.” It also looks particularly weak in the aftermath of the passing of Coach K’s great rival, Dean Smith. The passionately principled Coach Smith would not have only spoken out against the law. He would be leading a delegation to the statehouse to confront Mike Pence in between practices, no matter how much backlash it would have meant for him back home in North Carolina.

Normally, I am a big believer that we should not demand coaches or athletes to make political statements if they have no desire to do so. No one should be clamoring to hear what Coach K is thinking about the latest in Yemen. But there are moments when they actually do need to stand up and be counted. For example, when a billion-dollar tournament is about to be played in a state that currently is being confronted for codifying a 21st-century viral variant of segregation. For example, when your school is being used to sell that very tournament. For example, when every coach in the country, is looking to you for leadership. That’s when you pick a side. Saying that you are just going to talk about your “team and basketball” and making snide comments that you are also not going to talk about “social issues” and “poverty” shows how great the gap is between principle and snark. It’s the same gap we see between the elder statesman coach speaking with the gravity of a small-parish priest to the media, and the guy cursing out teenagers on his sidelines. Mike Krzyzewski once said, “I don’t look at myself as a basketball coach. I look at myself as a leader who happens to coach basketball.” This isn’t leading. It’s not even following. It’s standing for no one but yourself.