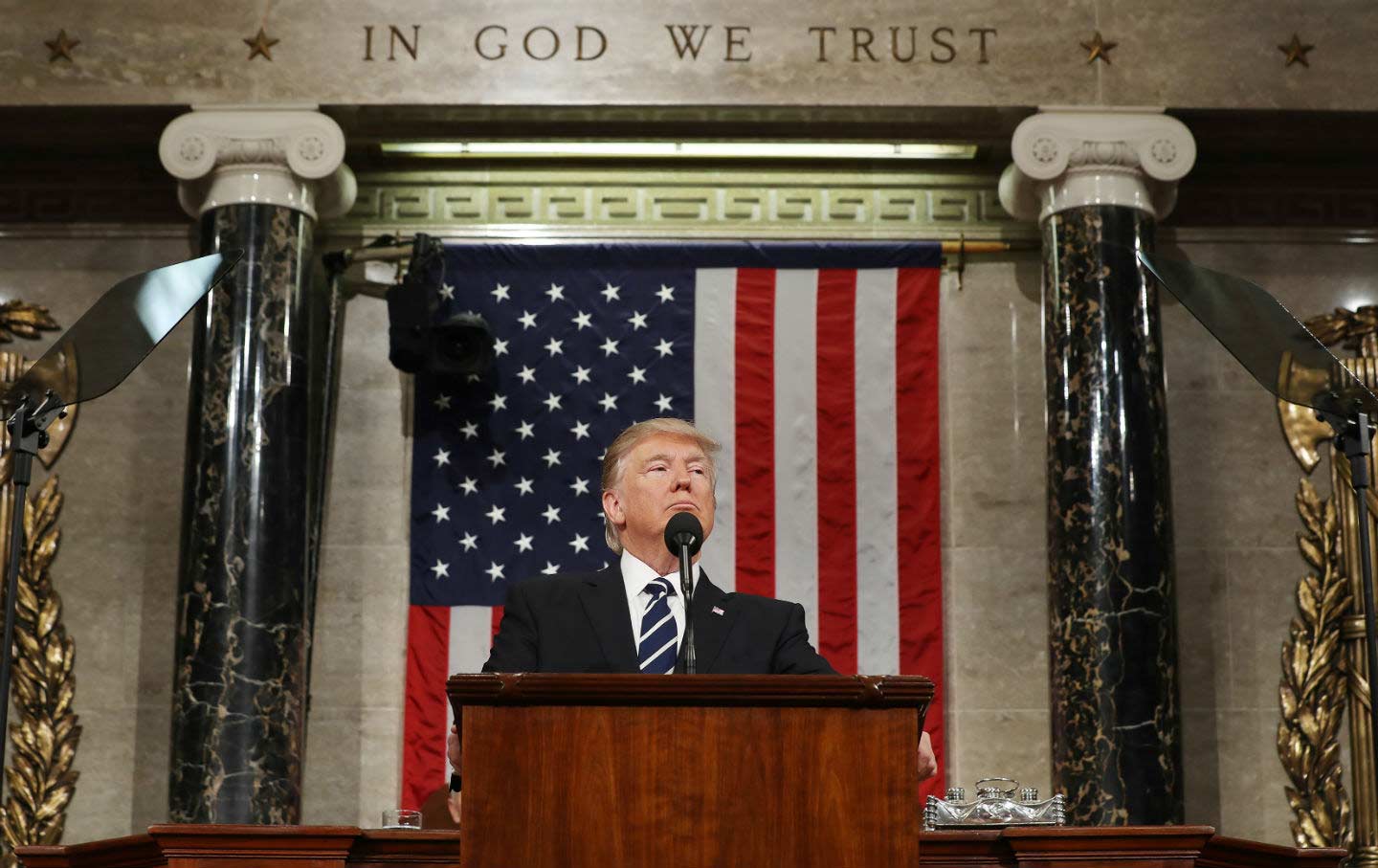 On February 28, 2017, US President Donald Trump delivers his first address to a joint session of Congress from the floor of the House of Representatives in Washington, DC. (Reuters / Jim Lo Scalzo / Pool)

Listening to President Donald Trump address a joint session of Congress on Tuesday night, it would have been easy to be taken aback by his dignified tone and at times lofty language. He spoke of freedom. He spoke of dreams. He did not, in deep contrast to his inauguration address, deploy the word “carnage.” On Tuesday night, Trump even struck a note of optimism about, yes, immigration reform.

“I believe that real and positive immigration reform is possible,” Trump said, “as long as we focus on the following goals: to improve jobs and wages for Americans, to strengthen our nation’s security, and to restore respect for our laws.”

That utterance alone might have shocked anyone who’s paid attention to Trump’s anti-immigration crusade of the last year and a half. But even before the speech itself, Trump had sent shock waves throughout the country when he floated his openness to legislation offering some form of legal status for undocumented immigrants.

Once the speech was under way, he made multiple references to such a package. “If we are guided by the well-being of American citizens then I believe Republicans and Democrats can work together to achieve an outcome that has eluded our country for decades,” Trump said. And it’s true, immigration reform—typically defined as a package immigration-law update that would include a plan for offering citizenship or legal status to the nation’s 11 million undocumented immigrants—has repeatedly tripped up Congress. Immigration reform under not just a Republican president but a Trump administration at that? It’s enough to make a person’s head spin.

But it’s important to examine the real substance of Trump’s remarks on immigration Tuesday. Because behind his sanded-down rhetoric and beyond those vague references to an immigration-reform package, there was no deviation from standard anti-immigrant Trump to be found. Trump offered nothing of substance on the topic of immigration reform. And his one specific policy proposal was totally in line with the punitive anti-immigration crackdowns of the last month. Trump called for the creation of a body called “VOICE,” or Victims of Immigration Crime Engagement. The office would be housed in the Department of Homeland Security and focus on crimes committed by undocumented immigrants.

“We are providing a voice to those who have been ignored by our media, and silenced by special interests,” Trump said, going on to detail the stories of those who’ve been killed by undocumented immigrants. Trump then told the story of Jamiel Shaw, a father whose teenage son was killed by an undocumented immigrant in a random act of alleged gang violence. Shaw, who became a campaign fixture on Trump’s team, has been trotted out at nearly major immigration address Trump given in the last 20 months as a politician.

Four of Trump’s seven invited guests on Tuesday had similar tragic stories. That’s not new: At the RNC, at campaign stops, and at major immigration addresses, Trump has become fond of leaning on these violent tragedies to paint all undocumented immigrants as bloodthirsty, dangerous criminals.

There was a moment during the 2016 elections when then-candidate Donald Trump told Sean Hannity that he was open to a “softening” of immigration laws. “There could certainly be a softening because we’re not looking to hurt people,” Trump said in August. Trump, who had crisscrossed the country railing against immigrants and the alleged crime, mayhem, and savagery they bring with them to the United States, set political watchers agog. Then, a few days later, he gave a major immigration address in Phoenix where he laid out a 10-point plan to target undocumented immigrants with roundups, prosecution, detention, and deportation. Then, as he did on Tuesday night, Trump doubled down on the call for the border wall, revived a call for the eradication of undocumented immigration and the curtailing of legal immigration, and promised to stop “criminal cartels” and drug trafficking through beefed up military border enforcement. On Tuesday, Trump repeated his pledge to remove “gang members, drug dealers and criminals that threaten our communities and prey on our citizens.”

It’s not just the about-face that seems familiar. It’s that when Trump did get to specifics, he was completely consistent with the policies and narrative he leaned on throughout his campaign and the policies he’s implemented since assuming office.

Trump’s depiction of immigrants as a financial drain and threat to American workers is inaccurate.

There were some subtle tweaks. Instead of conjuring the violent immigrant bogeyman to serve as the sole justification for his immigration policies, on Tuesday night Trump implied that immigration crackdowns are also necessary to serve the economic needs of the American worker.

“By finally enforcing our immigration laws, we will raise wages, help the unemployed, save billions of dollars, and make our communities safer for everyone,” Trump said Tuesday. “We want all Americans to succeed—but that can’t happen in an environment of lawless chaos. We must restore integrity and the rule of law to our borders.”

This depiction of immigrants as a financial drain and threat to American workers is inaccurate. Study after study has found that immigrants are vital to their local and the national economy. Undocumented immigrants pay billions of dollars in taxes. Immigrants started more than a quarter of all new small businesses in 2011, even though they’re just 13 percent of the national population. And it’s not just mom-and-pop shops. Forty percent of Fortune 500 companies were founded by immigrants or the children of immigrants. The Center for American Progress has found that immigration reform would benefit native-born workers.

Where Trump did offer ideas about what immigration reform might look like, he sounded an awful lot like the anti-immigration outfit Federation for American Immigration Reform, responsible for designing laws like Arizona’s “papers, please” law SB 1070. In his address Trump called for replacing “our current system of lower-skilled immigration”—which “strain[s] the very public resources that our poorest citizens rely upon”—with a “merit-based system” that would likely preference those with advanced degrees and specialized skills over all others. This system, which FAIR has advocated, would likely drastically cut the numbers of people who enter the country legally and curb family-based reunification, which is currently the largest avenue for legal immigration.

It cost Trump nothing to float people’s hopes on Tuesday. To hear many of the pundits’ reviews of Trump’s speech, his calculating switch to a more decorous tone was all he needed to win over the American public. Trump can reap the short-term rewards of appearing to be open-minded and even compassionate. But his actual proposals, his real policies, and indeed, his truer intentions, remain unchanged in their extremity and violence toward immigrants and all those who could be thought of as outsiders.