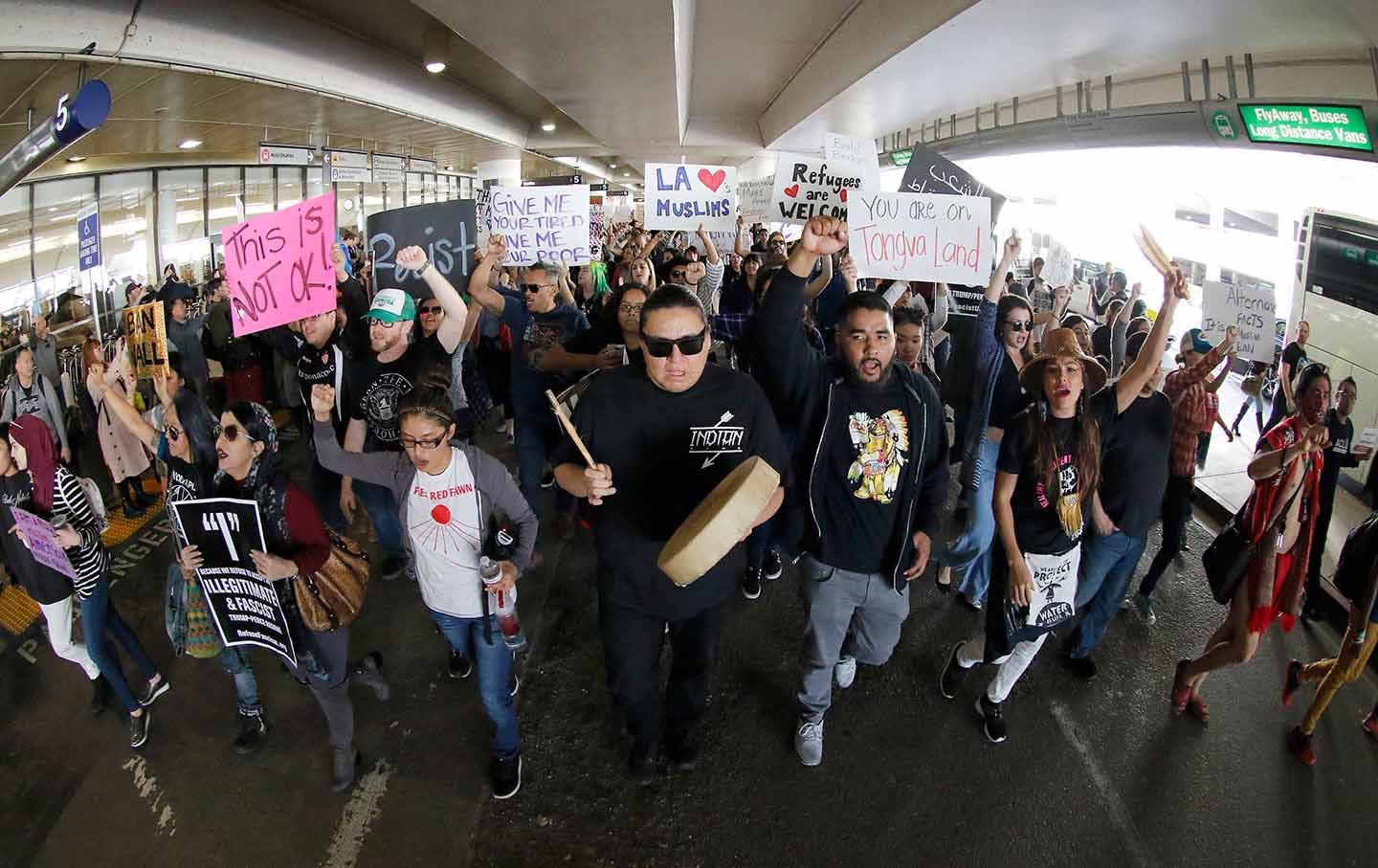 “O! ye that love mankind! Ye that dare oppose not only tyranny but the tyrant, stand forth!”
—Thomas Paine, Common Sense1

I write in a winter of discontent that marks the 280th anniversary of the birth of Thomas Paine, the Enlightenment thinker and revolutionary writer who called the American experiment into being. I write in recognition of the peril that is posed to that experiment with the assumption of the presidency by the authoritarian Donald Trump, and in celebration of the resistance to that peril by the true heirs to Paine’s legacy.2

Paine came to the American colonies as a refugee from an old and oppressive order, which he had offended as a pioneering organizer of workers and ardent advocate for egalitarian ideals. He arrived in Philadelphia in ill health and with limited prospects. Yet Paine began an immediate agitation against illegitimate governance, and in less than two years he had written the most influential tract of his time, Common Sense, which envisioned an independent United States that would serve as a refuge from injustice.3

“Every spot of the Old World is overrun with oppression. Freedom hath been hunted round the globe. Asia and Africa have long expelled her. Europe regards her like a stranger and England hath given her warning to depart,” wrote Paine in his call to rebellion against not just a monarch, but old ways of thinking about the human condition. “O! receive the fugitive and prepare in time an asylum for mankind.”4

Freedom of religion is a basic premise of the American experiment. Religious discrimination affronts that experiment.

Paine influenced citizens and future presidents to adopt enlightened policies that rejected monarchy and inherited power, and the distinctions along lines of religion that had underpinned and defined the empires of old. They would seek, as Paine proposed to “begin the world over again” with a Constitution that rejected religious tests and declared its commitment to the free exercise of religion. The first leaders of the new land would embrace religious diversity and make clear their intent to erect a “wall of separation” between church and state so that government would never promulgate policies favoring one faith tradition over another.5

Paine, the most ingenious of the founders, was quite aware that he had not always succeeded in convincing his contemporaries to do the right thing. He recognized the weaknesses of those who would assume positions of authority. Paine counseled leaders to avoid repressive measures and to eschew assaults of religious and political minorities in order to “protect” society. “An avidity to punish is always dangerous to liberty. It leads men to stretch, to misinterpret, and to misapply even the best of laws,” he wrote in the closing pages of his 1795 Dissertation on the First Principles of Government. “He that would make his own liberty secure must guard even his enemy from oppression; for if he violates this duty he establishes a precedent that will reach to himself.”6

This is a central premise of the Enlightenment vision that Paine sought to imprint upon an American experiment that began with sobering errors of judgement and morality but inspired the pursuit of a more perfect union. And it is this ideal that Donald Trump and his star-chamber acolytes seek to abandon with their embrace of “alternative fact” superstition, punishment of the other, and religious tests.7

Two days before the anniversary of Paine’s birth, Trump signed an executive order proclaiming “that the entry of nationals of Syria as refugees is detrimental to the interests of the United States and thus suspend any such entry.”8

Trump’s order sought to restrict travel not just from Syria to the United States but from other predominantly Muslim countries, including Iran, Iraq, Sudan, Libya, Yemen, and Somalia. Though they wound later attempt to put their actions in a better light, initial statements by the president and his mandarins left little doubt of their understanding that these measures would discriminate against Muslims.9

“Some of the most vulnerable people in the world right now are Muslims.” —World Relief president Scott Arbeiter

California Senator Kamala Harris, a former prosecutor and state attorney general, responded to Trump’s admission with a blunt statement of reality: “Make no mistake—this is a Muslim ban.”11

Turning away refugees based on their religion is, indisputably, inhumane. CNN reported that Scott Arbeiter, the president of World Relief, the humanitarian arm of the National Association of Evangelicals, responded to Trump’s religious-test talk by warning, “We would resist that strongly. Some of the most vulnerable people in the world right now are Muslims. If we say no Muslim should be let in, we are denying the humanity and dignity of people made in the image of God.”12

“Our Constitution says Congress shall make no law establishing a religion, or abridging the free exercise thereof. This is a violation of equal protection. It’s a religiously based ban,” says Congressman Keith Ellison, the first Muslim elected to the US House of Representatives, who used a Qur’an once owned by Thomas Jefferson at his initial swearing-in ceremony. “If they can ban Muslims, why can’t they ban Mormons? Why can’t they ban Seventh-day Adventists? Why can’t they move into ethnic groups?”14

Ellison speaks an American language, a language that goes back to Paine and the most enlightened of his compatriots, when the congressman warns of the threat that is now upon us.15

To suggest that the United States can or should discriminate based on religion or ethnicity or political views is an example of that “most detestable wickedness” that Paine warned would extend from the abandonment of reason by authoritarian pretenders to power.16

Paine and his contemporaries made religious freedom an essential premise of the American experiment; they recognized that the United States was settled, built, and made strong by followers of many faith traditions, and by dissenters and doubters, who had fled intolerance. For Donald Trump to suggest that a religious test—of the sort that is specifically decried in constitutional language establishing that “no religious test shall ever be required as a qualification to any office or public trust under the United States”—might now be applied by the keepers of the public trust in order to favor refugees from one faith tradition while discriminating against followers of another is a rejection of American values.17

An understanding that followers of all religions are entitled to equal protection under the law, and to an equal application of public policies whether they are citizens or refugees hoping to become citizens, is the hard-wired reality of the United States. “Identifying specific countries with Muslim majorities and carving out exceptions for minority religions flies in the face of the constitutional principle that bans the government from either favoring or discriminating against particular religions,” declared American Civil Liberties Union Executive Director Anthony Romero, as the Council on American-Islamic Relations announced plans to mount a constitutional challenge to Trump’s order.18

As tens of thousands of Americans protested Trump’s order, from Copley Square in Boston to the center of Westlake Park in Seattle, from Turner Park in the heartland city of Omaha to the White House in DC, from federal buildings to international airports across the country, resistance arose on the streets and in the courts. ACLU lawyers secured a stay, “blocking President Trump’s discriminatory policy from taking effect and preventing refugees and immigrants from being deported.” Romero explained that the federal judge who issued that stay “did not rule on the constitutionality of the order, but for now, the men and women who would have been deported are safe.” That was a important victory. But it is temporary and too limited in scope.19

The great struggle continues. This struggle, in the streets, in the courts and in the Congress, must be about more than preventing Trump from doing harm. It must be about renewing American ideals that have been too frequently been diminished and disregarded.20

The American history of welcoming Christians, Jews, and—yes—Muslims, is as old as the American experiment.21

This country’s founders recognized Islam as one of the world’s great religions, and interacted with followers of Islam. The first country to recognize the new United States was the Sultanate of Morocco (the ruler of which, Mohammed ben Abdallah, corresponded with President George Washington). John Adams referred in his 1776 essay “Thoughts on Government” to the prophet Muhammad as one of many “sober inquirers after truth.” And Jefferson, who championed religious freedom and diversity, did indeed own and consult a copy of George Sale’s English translation of the Qu’ran.22

Like Paine, the best and brightest of the founders of the United States were men and women of the Enlightenment who sought to burst the chains of what Jefferson referred to as “monkish ignorance and superstition.” Many of the founders embraced faith traditions. But they revolted against the “divine right of kings,” rejected the construct of state-sponsored churches, and wrote a Constitution that guaranteed freedom of religion.23

What Jefferson understood as “a wall of separation between Church & State” (as described in his letter to the Danbury Baptists) remains one of the great contributions of the American experiment to a world that in his time was only beginning to respect the view that “religion is a matter which lies solely between Man & his God, that he owes account to none other for his faith or his worship.”24

Former President Barack Obama decried religious tests and declared: “That’s not who we are.”26

President Trump would like to make it who we are. In so doing, he pits his vision of a frightened and punishing America against Tom Paine’s vision of a country that would by its example of reason and that, in its disavowal of “mingling religion and politics,” would herald “the birthday of a new world.”27

Thomas Paine recognized in his time that American ideals would be tested. And he called the defenders of those ideals to action with a message that resonates across the centuries.28

“You have too much at stake to hesitate,” Paine wrote. “You ought not to think an hour upon the matter, but to spring to action at once.”29