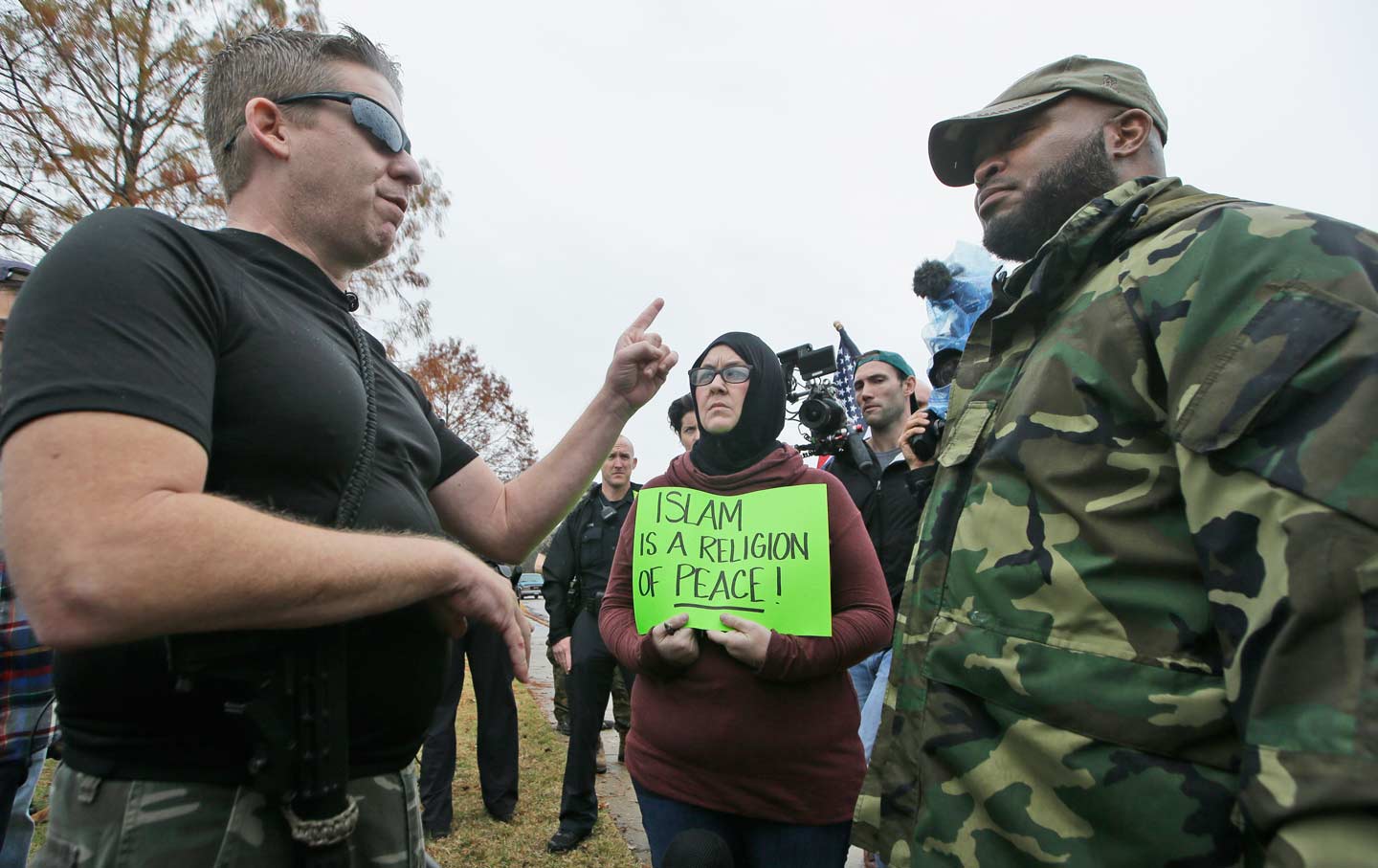 Anti-Muslim protestor David Wright, left, makes a point with counter protestor Vincent Simon, right, a Muslim, as Melissa Yassini holds as sign during protests across the street from a mosque in Richardson, Texas on Saturday, December. 12, 2015. (AP Photo / LM Otero)

Whether Donald Trump will win the Republican nomination, no one can tell—but what’s already clear is that he’s brought fascism back into the mainstream. At his rallies, Trump promises to make America great again by pouring scorn on women, Mexicans, African Americans, Asians, immigrants, LGBT people, the disabled, his opponents, and reporters who dare to criticize him. Every time he comes up with a new insult, his supporters whoop and cheer, seemingly confident in the belief that they are not now, nor would they ever become, one of his targets. Lately, he has taken to picking out individual protesters—a Black Lives Matter activist, a Muslim woman, a Sikh man—and offering them up to the jeering crowd, before having security escort them out. The message is unmistakable: There is no room at these gatherings for anyone who isn’t white and Christian. A Trump rally is nothing more than a hate-in.

Perhaps no community has been demonized more by Trump than Muslims. A week after the November 13 terrorist attacks in Paris, Trump suggested that mosques in the United States might have to be shut down, and he said that he wouldn’t rule out requiring Muslims to be registered in a database or carry special IDs. The statements were initially met with disbelief and dismissed by the media, but they gave him a solid bump in the polls. Then, in December, Trump called for a complete ban on Muslims entering the United States until, he said, “our country’s representatives can figure out what is going on.” (In fairness, while Trump is extreme, he isn’t alone among the Republican candidates: Ben Carson, Marco Rubio, Ted Cruz, and Jeb Bush have all indulged in anti-Muslim bigotry as well.)

Contrast this with how Trump has spoken about a different but no less visible community: the men and women who served in the United States armed forces. After pulling out of a debate in Des Moines because Fox News’s Megyn Kelly was scheduled to moderate it, Trump held a fund-raiser for veterans instead. “You veterans are incredible people, brave beyond comprehension,” he told the crowd. In New Hampshire, where he won the primary, he vowed to take care of vets. “They’re our greatest people,” he said. Trump has repeatedly promised to handle the mismanagement problems that have plagued the Department of Veterans Affairs. “That will stop, I will fix this quickly! ” he tweeted. (Again, Trump is not alone: All of his rivals have proclaimed their own unstinting support for vets.)

So it is that at Trump’s rallies, as in much of America, Muslims and veterans are spoken about in drastically different ways—the former as potential traitors and monsters, the latter as steadfast patriots and heroes. In the process, both are stripped of their agency and individuality. What this rhetoric disguises, however, is a deeply cynical strategy on the part of a candidate who has never held political office, has no experience with foreign policy, and has never served in the armed forces.

Aside from suggesting that he’d fire incompetent executives, Trump has offered no specifics on how he would fix systemic problems like the long wait times for medical appointments or the huge backlog of disability claims. Furthermore, the policies he has suggested for dealing with groups like the Islamic State, including torture and the murder of families of suspected terrorists, amount to war crimes—crimes that, if elected, he will ask service members to carry out for him. The VA has already been under fire for its record on PTSD treatment and suicide prevention. Sending troops into a war where, in Trump’s words, they will be asked to do things that are “a hell of a lot worse than waterboarding” doesn’t suggest care or concern for our veterans.

Trump’s open contempt for Muslims may play well at his rallies, but his proposed ban amounts to a new form of segregation, one based not on race but on faith. It would isolate the United States from the rest of the world and deprive millions of Americans of contact with family and friends, business partners, artists, athletes, and academic or professional colleagues. (This isn’t merely a theoretical argument for me: My cousins, uncles, and aunts would not be able to visit if Trump is elected.) This ban is simply immoral—and because people’s passports are not indicators of their beliefs, it is also unenforceable.

Though veterans are revered and Muslims reviled, the two communities are not mutually exclusive, and it’s been heartening over the last few weeks to watch them call Trump out on his bigotry. Sgt. Tayyib Rashid, a Marine from Chicago, tweeted a picture of his military ID along with a challenge to Trump: “I’m an American Muslim and I already carry a special ID badge. Where’s yours?” There are also examples of solidarity between the two groups. In November, a mosque in Seattle held its ninth yearly Day of Dignity event for the homeless, including homeless vets, providing them with food and supplies. And in December, an Army veteran started #IWill- ProtectYou, a Twitter campaign in support of an 8-year-old Muslim girl who was afraid that the military might remove her from her home under a President Trump.

The truth is that veterans and Muslims have much in common: They bear the costs of distant wars at home. For veterans, these costs include having to face the medical and psychological effects of combat. And yet vets suffering from PTSD have been turned away by VA clinics that can’t take in new patients. For Muslims, the burden of America’s wars in the Middle East comes in the form of hate crimes. In the Bronx last month, two teenagers beat up a Muslim man while screaming “ISIS! ISIS!” at him.

I don’t know if Trump will win the GOP nomination, but I do know that all of us have lost when a political gathering becomes a hate-in. Over and over, Trump has intimated to his supporters that the key to solving this nation’s problems lies in blaming or rejecting others. He has contaminated our public discourse with bigotry and poisoned the hearts of many Americans. The next president, whoever he or she may be, will have to find an antidote.