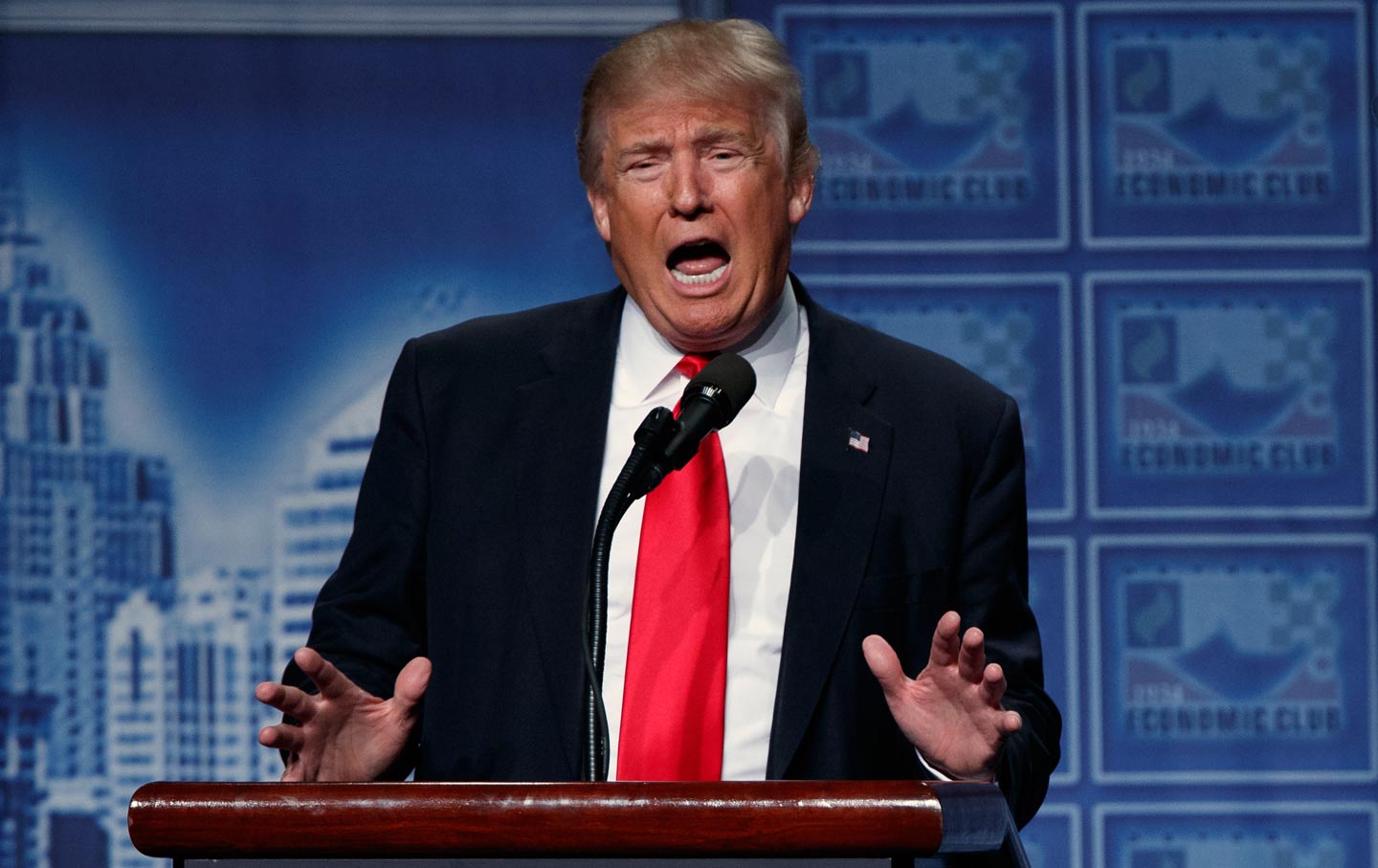 Richard Nixon was famously thin-skinned when it came to presidential politics.

But it turns out that Donald Trump is far touchier than the man who lost and won and lost the presidency in the 1960s and 1970s. When things did not go his way, Nixon grumbled and schemed, but he also worried about raising too many public objections—for fear that he might be seen as a “sore loser.” Trump is far less circumspect. His weekend meltdown over proposals to recount votes in battleground states where he only narrowly leads in this year’s presidential race identifies the hypersensitive billionaire as a far more delicate political type: the “sore winner.” And his tweetstorm claim that he lost the national popular vote because of “millions of people who voted illegally” reminds us that Trump’s paranoia exceeds that of the famously maladjusted Nixon.

As America engages in a suddenly intense discussion about presidential-election recounts, it is important to remember that we have been here before. People, of course, recall the Bush-versus-Gore Florida recount of 2000, which was mangled by the intervention of the US Supreme Court.

But people often forget about the conflicts that arose following the exceptionally close finish of the 1960 contest between Democrat John Fitzgerald Kennedy and Nixon. The popular vote split almost evenly; Kennedy won 49.72 percent to 49.55 for Nixon, with the Democrat leading the Republican by just 112, 827 votes nationally.

Trump claims he is losing the national popular vote because of “illegal voting” and “fraud.” That is false.

The national popular-vote divide provided just one measure of the closeness of the 1960 contest. The better measure of that closeness was found in the states. Ten states were decided by 2 percent of the vote or less, and eight of those states favored Kennedy. Kennedy won Hawaii by 115 votes, Alaska by 846 votes, New Mexico by 2,294 votes, Delaware by 3,217, Illinois by less than 9,000 votes, Missouri by barely 10,000 votes. In New Jersey, Kennedy prevailed by a mere 50-49 margin; in Texas, it was 51-49.

A shift toward Nixon in any of several combinations of states could have erased Kennedy’s Electoral College advantage, as the distribution gave him just 34 more electoral votes than he needed to prevail.

Nixon refused to formally pursue recounts—fearing, as he later wrote, that “Charges of ‘sore loser’ would follow me through history and remove any possibility of a further political career.”

But Republican National Committee chairman Thruston Morton kept raising concerns about irregularities in Illinois and Texas. Morton argued that many of the state results were close enough to merit a review of voting that might yet shift the election from Kennedy to Nixon. Morton was not alone; members of Nixon’s inner circle encouraged inquiries, investigations, reviews, and recounts in the better part of a dozen states. Trusted Republicans were sent to conduct “field checks” in states where the results were close, legal challenges were mounted and several recounts took place.

As is usually the case with reviews and recounts, not much changed in the challenger’s favor. Indeed, a recount in Hawaii tipped the state from Nixon column to Kennedy’s.

Morton and those who raised objections and challenges did the right thing.

When elections produce a close or controversial result, it is appropriate for candidates who are on the losing end of the count to ask questions and to pursue remedies. No one expects the candidates who are ahead on election night to object; they are too busy claiming “mandates” that were never actually accorded them.

Recounts invariably strengthen and advance the cause of American democracy.

It falls to candidates who hold out small hope for a reversal of fortune (or, in some rare cases, no hope at all) to demand that every vote be counted and counted accurately. This is one of the reasons states allow for recounts and reviews of voting. It’s important to respect the recount process, not merely when it comes to confirming wins and losses but to maintain faith in the integrity of elections.

Unfortunately, in an age of hyper-partisan spin and know-nothing media, there is a tendency to see demands for recounts as the burdensome expressions of sore losers. In a sense, both Nixon’s response (a refusal to associate himself with recount efforts) and Trump’s response (a wild-eyed dismissal of these efforts) get the equation wrong—though Nixon at least maintained a measure of dignity that Trump has now sacrificed.

For Americans who are concerned with the functioning of the elections that confer authority on executives and legislators, recounts are understood as fundamental underpinnings of democracy. They only rarely overturn initial results. But even when they simply confirm those results, they give us all greater confidence in systems that can only serve their purpose if citizens recognize them as fair and functional.

Seen in this context, the Green Party’s request for recounts in the three closely contested states of Wisconsin, Michigan, and Pennsylvania—which now favor Trump and provide the Republican with enough electoral votes to claim the presidency—should be welcomed.

But Trump’s not in a welcoming mood.

The prospect of a recount in Wisconsin and the other states has unnerved the president-elect, whose objections have taken the form of a Twitter frenzy. As obsessive as ever, Trump has griped that the recount project is a “scam,” called it “sad” and announced that “it won’t change anything.” In more than a dozen tweets, the president-elect has claimed that he is the real victim—alleging that there was “serious voter fraud in Virginia, New Hampshire and California” (states he lost) and arguing that “In addition to winning the Electoral College in a landslide, I won the popular vote if you deduct the millions of people who voted illegally.”

Trump is wrong. He did not win an Electoral College “landslide” (PolitiFact reviewed the claim and rated it “false”) and there is no evidence of massive illegal voting in the fall 2016 race (PolitiFact rated that one “false,” as well).

Trump has even targeted Clinton for abuse, despite the fact that she has said nothing about the proposed recounts. (Attorneys for her campaign will observe the process in Wisconsin, as, presumably, will lawyers for the Trump camp.)

Trump may be right that nothing will change.

But it is silly to get so upset about recounts—especially after a 2016 election that produced close and conflicting results.

Clinton is the clear winner of the popular vote. While votes are still being counted in several states, the Democrat is now ahead by more than 2.2 million votes, and election analysts expect that lead to grow before all the counting is done. Unlike Kennedy, who had a popular-vote win to validate his Electoral College advantage, Trump only leads in the Electoral College. And that lead is based on narrow results from several states.

In Wisconsin, Trump’s up by around 22,000 votes out of almost 3 million cast.

In Pennsylvania, Trump’s got an advantage of roughly 68,000 votes out of over 6 million cast.

Observers who are familiar with recounts will tell you that upsets of results such as these are exceptionally rare. But the recounts proposed by the Greens focus on election-integrity issues, seeking to resolve questions about human errors and mechanical mishaps and to relieve concerns about the remote prospect of hacking.

“We are standing up for an election system that we can trust; for voting systems that respect and encourage our vote, and make it possible for all of us to exercise our constitutional right to vote,” explains Jill Stein, who was on the ballot in all three states this year as the Green Party’s presidential nominee.

That’s a reasonable stand to take.

Recounts strengthen and advance the cause of American democracy. They should be respected as a part of the political process, not attacked on Twitter by conspiracy theory–spouting politicians.