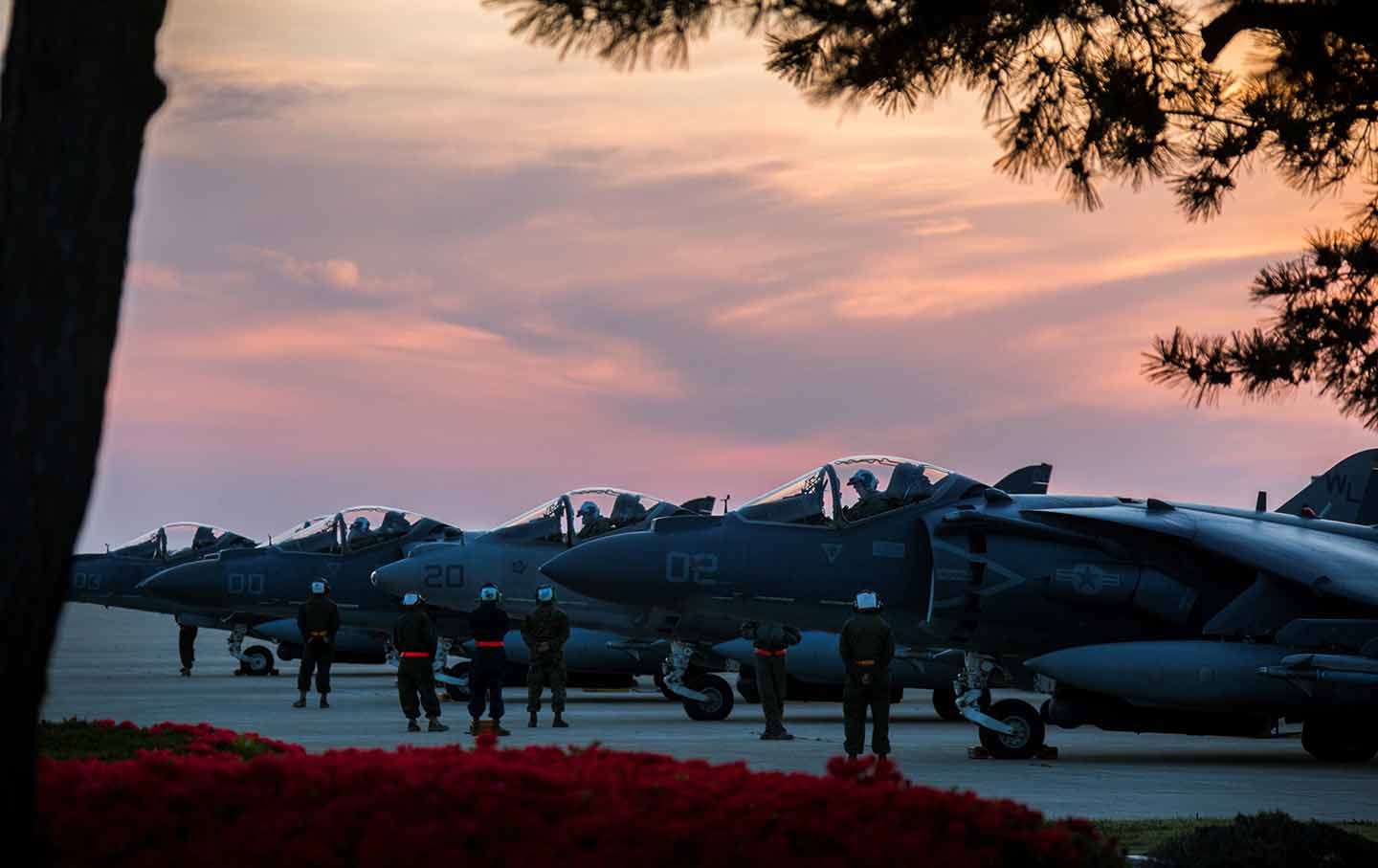 US Marines hold an exercise on April 26, 2017, at Kunsan Air Base, South Korea. (US Marine Corps / Carlos Jimenez / Handout via Reuters)

President Trump’s first 100 days in office have been characterized by a general disregard for the Constitution, and a specific disregard for the document’s clearly stated requirement that military actions be authorized by Congress. The president ordered an unauthorized, and seemingly pointless, attack on a Syrian runway in early April. And, as the month came to a close, he was talking about something far more serious: a “major, major conflict” with North Korea.

In a recent Reuters interview, Trump still held out the prospect that diplomacy could dial down tensions with Kim Jong-un’s saber-rattling fiefdom. But the president told the news agency that “There is a chance that we could end up having a major, major conflict with North Korea. Absolutely.”

If Trump really believes this, he should ask Congress to open a debate on whether the United States is ready and willing to enter into a military conflict with North Korea. Trump, as commander in chief, may respond in emergency circumstances to attacks, and to well-defined and imminent threats. But, at this point, he has no legal authority to order offensive military action against North Korea.

This basic premise of the Constitution—to which Trump swore an oath, but about which he appears to have scant understanding—has been disregarded and disrespected by the 45th president during his first 100 days. But now, a senior member of the House Judiciary Committee and the former chairman and ranking member of the Subcommittee on the Constitution, Civil Rights, and Civil Liberties is alerting the president that he has a duty to consult Congress.

“Trump does not have the authority of a dictator to take this country to war without Congressional approval.”

“President Trump, Vice President Pence, and Ambassador Haley have explicitly, and repeatedly, threatened military attacks by the United States on North Korea if North Korea engages in any nuclear or missile tests,” says Congressman Jerrold Nadler (D-NY). “The President should remember that, in the absence of an imminent threat of a North Korean attack on the United States or on US forces, he has zero legal authority to order military action without prior Congressional authorization,” says the veteran congressman. “Any such order would clearly and unequivocally be illegal and unconstitutional.”

Those are blunt words. But they are necessary. Tensions with North Korea have deep roots, and they are ongoing. These tensions are particular concerns for South Korea, China, and Japan. But the United States, which maintains a massive military presence in the region, is easily drawn into Pacific conflicts. And Trump has already displayed a penchant for bombing first and thinking second.

What Nadler is saying is what every member of Congress, Democratic and Republican, liberal and conservative, should be saying: “The Constitution vests this power [to authorize military action] with Congress, not with the President. Despite his pretensions, President Trump does not have the authority of a dictator to take this country to war without Congressional approval.”