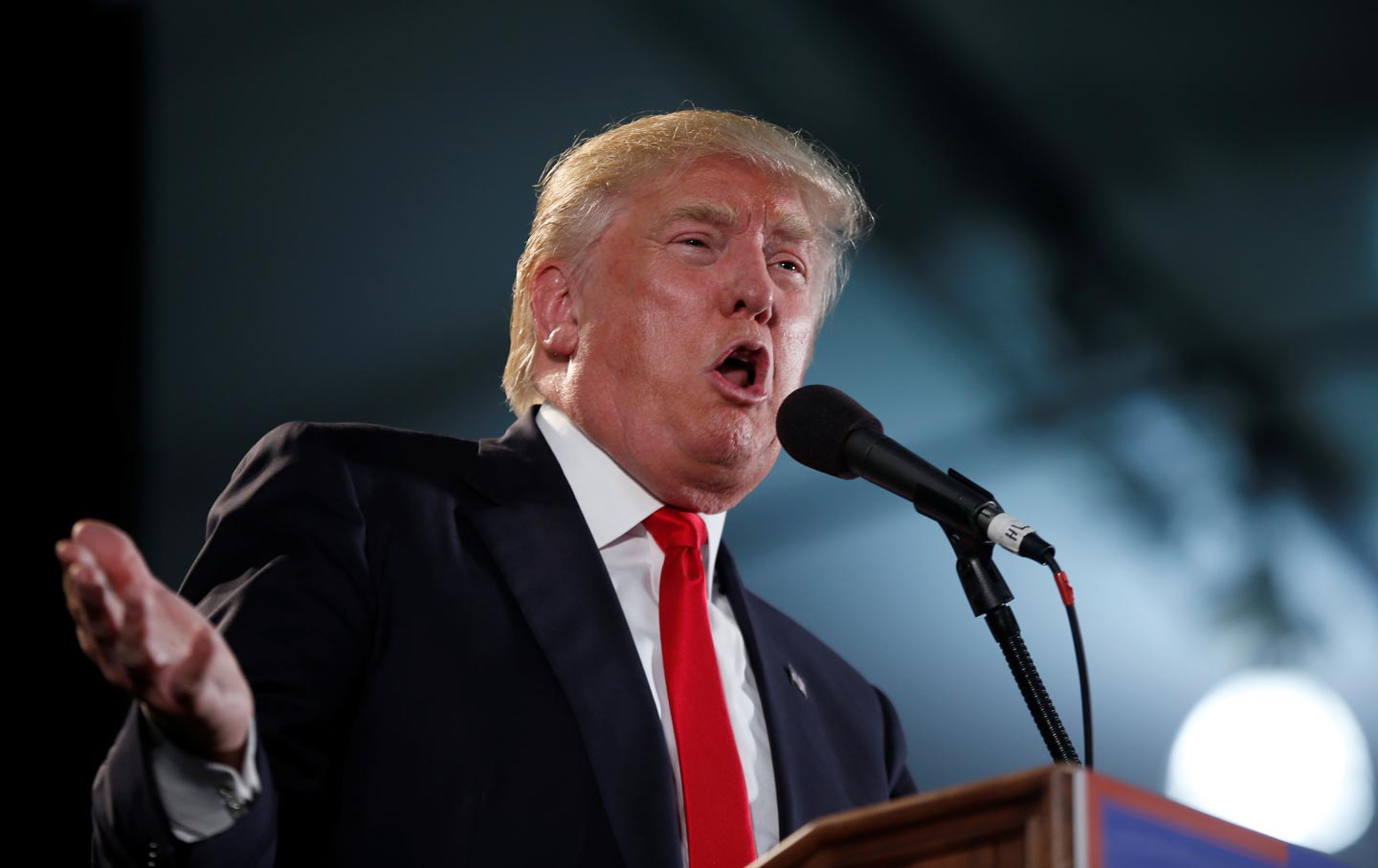 House Speaker Paul Ryan spent Thursday morning reassuring his Janesville constituents that he would speak out about religious freedom and anti-Muslim intolerance. Only hours later, he endorsed the man who’s proposed a Muslim ban, Donald Trump. “This to me is about saving the country and preventing a third progressive, liberal term, which is what a Clinton presidency would do,” Ryan told the Associated Press.

Just as Ryan announced his endorsement—he said he was “voting” for Trump in a newspaper op-ed, and a spokesperson confirmed that would serve as an endorsement—Hillary Clinton was disemboweling Trump in a rare Clinton stemwinder that shifted between serious outrage and roast-style barbs that her audience interrupted with laughter. “Donald Trump’s ideas aren’t just different—they are dangerously incoherent,” she told a revved-up crowd. “They’re not even really ideas—just a series of bizarre rants, personal feuds, and outright lies. This is not someone who should ever have the nuclear codes—because it’s not hard to imagine Donald Trump leading us into a war just because somebody got under his very thin skin.”

At first it seemed like Ryan’s announcement was intended to upstage Clinton’s big speech. But without video, the mild, old-fashioned announcement, grey as the print it was published in, didn’t lend itself to big TV or tabloid hype. Instead, the real result of the Ryan-Clinton juxtaposition was to point out how low Ryan had fallen. The man who has posed as the future of the party, who has played the firm schoolmaster waiting for the childish Trump to improve his behavior, suddenly caved.

And having caved, Ryan perhaps unwittingly unleashed Raging Trump. Freed from the constraints of courting Ryan, the red-faced screamer who appeared in San Jose Thursday night was at his most unhinged, raving about “Lyin’ Crooked Hillary” in the wake of her widely praised speech. “After what she said about me today and her phony speech. That was a phony speech. That was a Donald Trump hit job,” he told an adoring crowd in San Jose. “I will say this. Hillary Clinton has to go to jail.” Although he called Sanders “Crazy Bernie” and “a nut job,” he also insisted that because of their stands against free-trade pacts, “the Bernie people are gonna be coming to Trump.”

The presumptive GOP nominee spent 10 minutes shrieking about Barbara Res, his former construction director who accused him of sexism in a New York Times article, and 10 minutes more attacking the Times and Washington Post. By the time he closed his speech he was delivering his greatest hits—build the wall, stop the drugs, bring back jobs, make America great again—in a voice he’d grated to a scary croak with his hour-long recitation of grievance.

Unfortunately, coverage of Trump’s meltdown was overshadowed by the violence of anti-Trump provocateurs, who trapped a Trump supporter and pelted her with eggs and beat another male Trump backer. This recent uptick in violent protest at Trump rallies has the potential to backfire on the anti-Trump movement by making him a sympathetic figure to American voters who would otherwise see him as a dangerous demagogue. Peaceful protest of the threat to American democracy Trump represents is fine; the menace and outright physical attacks we’ve seen lately are not.

There were Sanders supporters among the protesters, but I would love to see Sanders and Clinton issue a joint statement about the increasingly disruptive anti-Trump protests. Demanding that Sanders alone do so (I’ve seen such calls on social media) pathologizes his candidacy and his supporters, the vast majority of whom are peaceful. Whoever is the Democratic nominee will be hurt by a summer and fall of anti-Trump violence; it would be a great step toward unity for the two rival Democrats to do it together.

At any rate, it is political malpractice to do anything right now that distracts from the Republican meltdown. Paul Ryan’s craven cave-in should be covered in great detail, his endorsement chyroned beneath Trump’s every irrational, anti-democratic provocation. The man whom reporters long ago anointed, on very little evidence, as the wonky conscience of conservatism sold his soul on Thursday. It’s hard to understand. With no evidence, he announced himself convinced that Trump is ready to back his conservative policy agenda. “I feel confident he would help us turn the ideas in this agenda into laws to help improve people’s lives,” he wrote in his op-ed—even though Trump has flip-flopped on issues like a minimum-wage hike and tax cuts for the rich and has vowed to protect Social Security and Medicare from cuts or hikes to the eligibility age. Nothing Trump has done since Ryan withheld his endorsement last month has changed the basic dynamics of his campaign. The endorsement, and its timing, made little sense. Maybe Trump is the shadow bad boy that lurks behind Ryan’s wonky Boy Scout persona. That’s as good an explanation as any for their marriage of political convenience.

Clinton certainly won the day. She shifted a news cycle that was focused on several recent polls showing a tight race in California, a state that long ago she was predicted to win easily. Her punchy speech may even help her in California, by shifting the voters’ attention to the existential threat that is Donald Trump, and the capability of the woman who is almost certain to face him in November. It felt like the general election had begun in earnest, and Clinton pulled out in front. It will be a long five months, but Clinton showed an audience of skeptics what her admirers insist the country will eventually see.