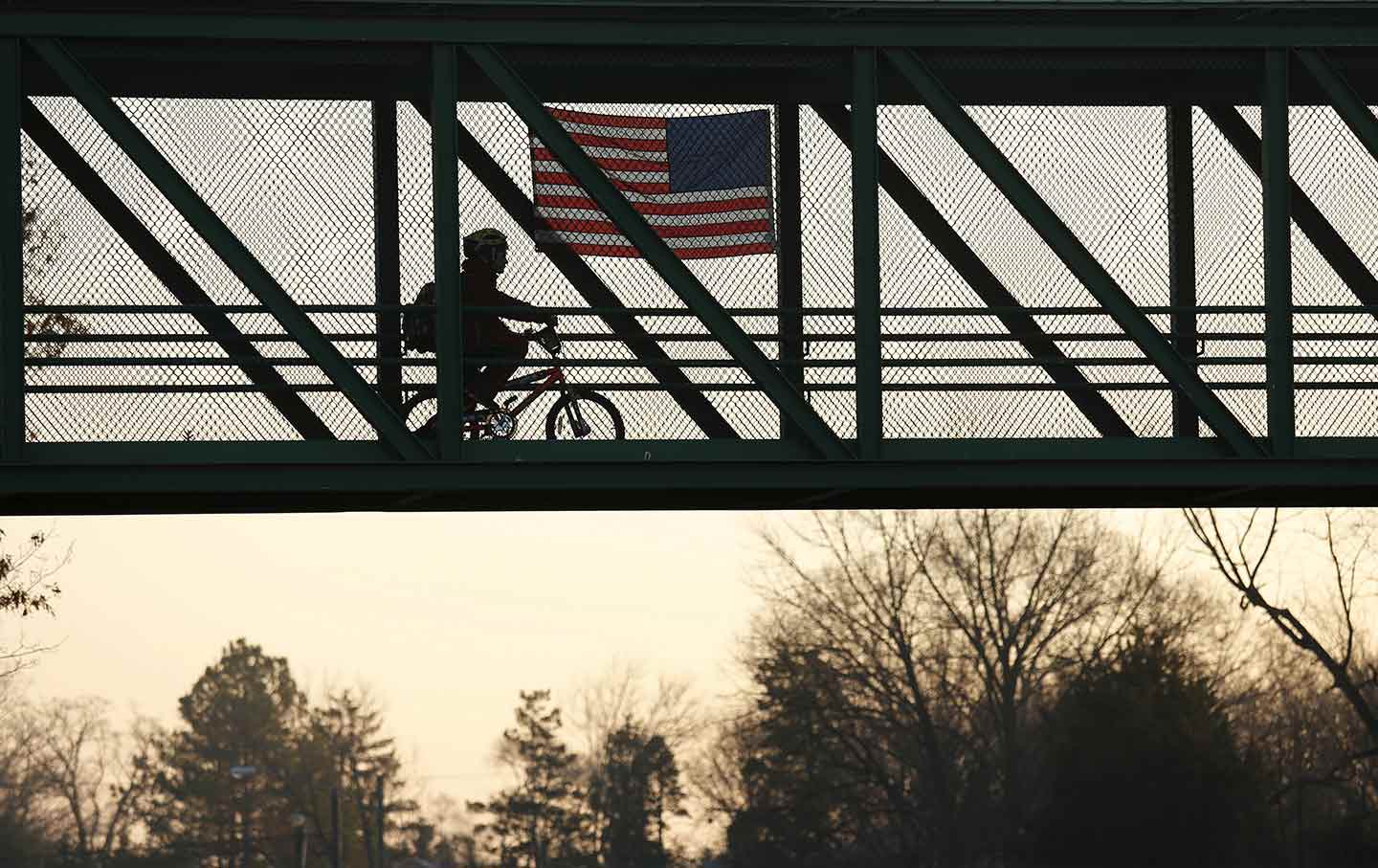 A boy riding his bicycle to school crosses a highway overpass just outside of Washington, DC, in 2015. (Reuters / Kevin Lamarque)

I would bet a large sum that my father has seen 90 percent of the films nominated for this year’s Academy Awards. And my guess, too, is that he cried during every single one of them. He’s not embarrassed to cry at movies, or television shows, or commercials. He’s a sap, pretty proudly. Or, he’s at least an unconcerned one.

Physically, my dad is strong; he plays lots of tennis. But he’s very skinny. He refers to his legs as sticks, and says they are not of the human varietal—that they more resemble poultry (he’s right, by the way). My dad is overwhelmingly kindhearted, he’s there for me, is super-keen on listening to my problems, and he’s affectionate. Poppi texts me at least three times a day to tell me he loves me and is proud of me. In fact, just now, as I was in the middle of writing this paragraph, he sent me a text that read, “I love you infinity times infinity and best in all of the galaxies and beyond through eternity.” And every time I publish a piece of writing, he sends out an e-mail announcing my new article to his friends, our family, his colleagues, my friends, and also, somehow, my colleagues.

This side of Poppi doesn’t quite fit our country’s definition of “masculine”—which we often assume includes attributes like strong, withdrawn, and violent.

But in other ways, my “sissy” dad is quite “masculine.” He’s got a bad temper, though it’s cooled with age. I remember visiting his office when I was a kid and seeing holes in the wall—when I asked, he’d say, sheepishly, that they were the result of his being frustrated after a phone call or meeting with a client, judge, or opposing counsel. Also, Poppi doesn’t like it when you disagree with him—fair enough, that’s natural; I don’t either. But he’ll interrupt you over and over and over to get his point across, drowning out any possibility of your actually finishing your thought. On days and nights when he watched football when I was growing up, I’d hear him clear across the apartment screaming into the television, “Oh, come onnnnnnnn, you [expletive expletive expletive]” in a tone that frightened me. Nowadays, I stay away from his room when he’s watching his football—and I’m pretty sure that’s why my mom got her own TV in the kitchen.

Reading this, you may think that my dad’s less-desirable behavior is pretty normal for a cis white guy, and I agree with you, it is. (I would know, I’ve dated lots of them.) But when I try to confront my dad, or most of the cis men who I am close to about their misogyny, their responses have always been a genuine—but unwelcome—shock. When I describe their unsavory qualities as rooted in what bell hooks calls the “disease” that is masculinity—punching walls, talking over women, screaming at a sporting event in a tone that should only be reserved for encounters with killers—they’ve looked at me quizzically, angrily.

Last week, comedian Michael Ian Black wrote a compelling and heartfelt piece for The New York Times titled “The Boys Are Not All Right.” Acknowledging, in the wake of the Parkland mass shooting that claimed the lives of 17 students and teachers, that “Girls aren’t pulling the triggers. It’s boys. It’s almost always boys,” Black made a plea to interrogate the state of boyhood and manhood in the United States. He writes, “There has to be a way to expand what it means to be a man without losing our masculinity. I don’t know how we open ourselves to the rich complexity of our manhood.”

Black is starting from the same place that many of the men in my life are: that certain qualities of masculinity are natural and immovable, and what’s important is that we expand on its innate properties to include more feminine ones, instead of scrutinizing, or, dare I even say, proposing to rid ourselves of the whole category.

It might sound rash, getting rid of masculinity. But it’s really not a crazy thought. We only have to look back a little over 100 years to understand that, in America, the concept of masculinity was constructed to defend white supremacy and white male dominance over black men and women of all races.

In her seminal book on the issue, Manliness and Civilization: A Cultural History of Gender and Race in the United States, 1880-1917, author Gail Bederman writes: “I don’t see manhood as either an intrinsic essence or a collection of traits, attributes, or sex roles. Manhood—or ‘masculinity,’ as it is commonly termed today—is a continual, dynamic process.” The first thing we need to do, according to Bederman, is stop arguing that masculinity has traits that are inherent. “Gender,” she writes, “is dynamic and always changing.”

Between 1820 and 1860, according to Bederman, more and more white men were beginning to identify as middle class: entrepreneurs, professionals, and managers. And with that distinction, there came about a new and important gender identification for men, one that centered around civility. As opposed to brutishness or violent tendencies, manliness during this period was focused on a civilized character, holding off on marriage to accrue wealth. And then a man should focus on providing a good life for his wife, his children, or his employees.

Between 1879 and 1910, the number of middle-class men who were self-employed dropped, from 67 percent to 37 percent, prompting another a shift. “Middle class Victorian men were obsessed with manhood at the turn of the century,” writes Bederman. They became “obsessed” with cowboy novels, and hunting and fishing. At the same time new epithets, like “sissy,” “pussy-foot,” “cold feet” and “stuffed shirt, ” emerged, indicating “behavior which had once appeared self-possessed and manly but now seemed over-civilized and effeminate,” writes Bederman. Around 1890, a noun defined as “the essence of manhood” took hold for the first time—now, manhood was called “masculinity.”

The idea, Bederman says, was that being “manly” had a “moral dimension,” and was defined by a dictionary at the time as “possessing the proper characteristic of a man; independent in spirit or bearing; strong, brave, large-minded, etc.” But then, when the economy tanked between 1879 to 1896, and with it the whole middle-class white-male “civilized” identity, the concept of “manliness” shifted again. After that, Bederman says, when men wished to invoke a male power they used “masculine” and “masculinity” to describe it. “The adjective ‘masculine’ was used to refer to any characteristics, good or bad, that all men had,” she wrote. The element of morality had been left behind.

The shift in white middle-class American male identification at the turn of the 19th century was also a way to justify white supremacy. “Linking whiteness to male power,” Bederman wrote, “was nothing new.… during the first two-thirds of the nineteenth century, American citizenship rights had been construed as ‘manhood’ rights which inhered to white males, only…Negro males, whether free or slave, were forbidden to exercise ‘manhood’ rights—forbidden to vote, hold electoral office, serve on juries, or join the military. The conclusion was implicit but widely understood: Negro males, unlike white males, were less than men.” But once “masculinity” came around at the end of the 19th century, and black men were fighting for “manhood rights,” a new idea had emerged. White middle-class men were starting to see themselves as maintaining a universal male quality: savagery. But the way they separated themselves from their black counterparts, was to articulate that they had evolved more. Bederman uses the example of National Geographic, which was first published in 1889 and gained popularity “by breathlessly depicting the heroic adventures of ‘civilized’ white male explorers among ‘primitive tribes in darkest Africa.” Similarly, she writes, “Anglo-Saxonist imperialists insisted that civilized white men had a racial genius for self-government which necessitated the conquest of more ‘primitive’ darker races.”

America’s new definition of masculinity was cemented during the 20th century. Though black men gained the right to vote, under Jim Crow laws, which last well into the mid-20th century, they continued to be subjugated by white men, who restrained black men’s economic possibilities and frequently portrayed them as uncontrollable rapists. From early westerns to the action films we watch today, white cis men overwhelmingly were cast as leads in the mass entertainment our culture consumes; guns became a rite and plaything of young white men in our country. And masculinity became a made-up excuse to dominate.

In his essay, Michael Ian Black writes: “I believe in boys. I believe in my son. Sometimes, though, I see him, 16 years old, swallowing his frustration, burying his worry, stomping up the stairs without telling us what’s wrong, and I want to show him what it looks like to be vulnerable and open but I can’t. Because I was a boy once, too.”

Black can’t show his son what vulnerability looks like not because he is biologically incapable of doing so. The block is one formed by habit, culture, and an American history predicated on white male domination—which produced a masculinity predicated on white male domination. Who says we have to hold onto that? It is only with the understanding that gender identification is moveable, malleable, and worth undoing that we can begin to make the boys all right.