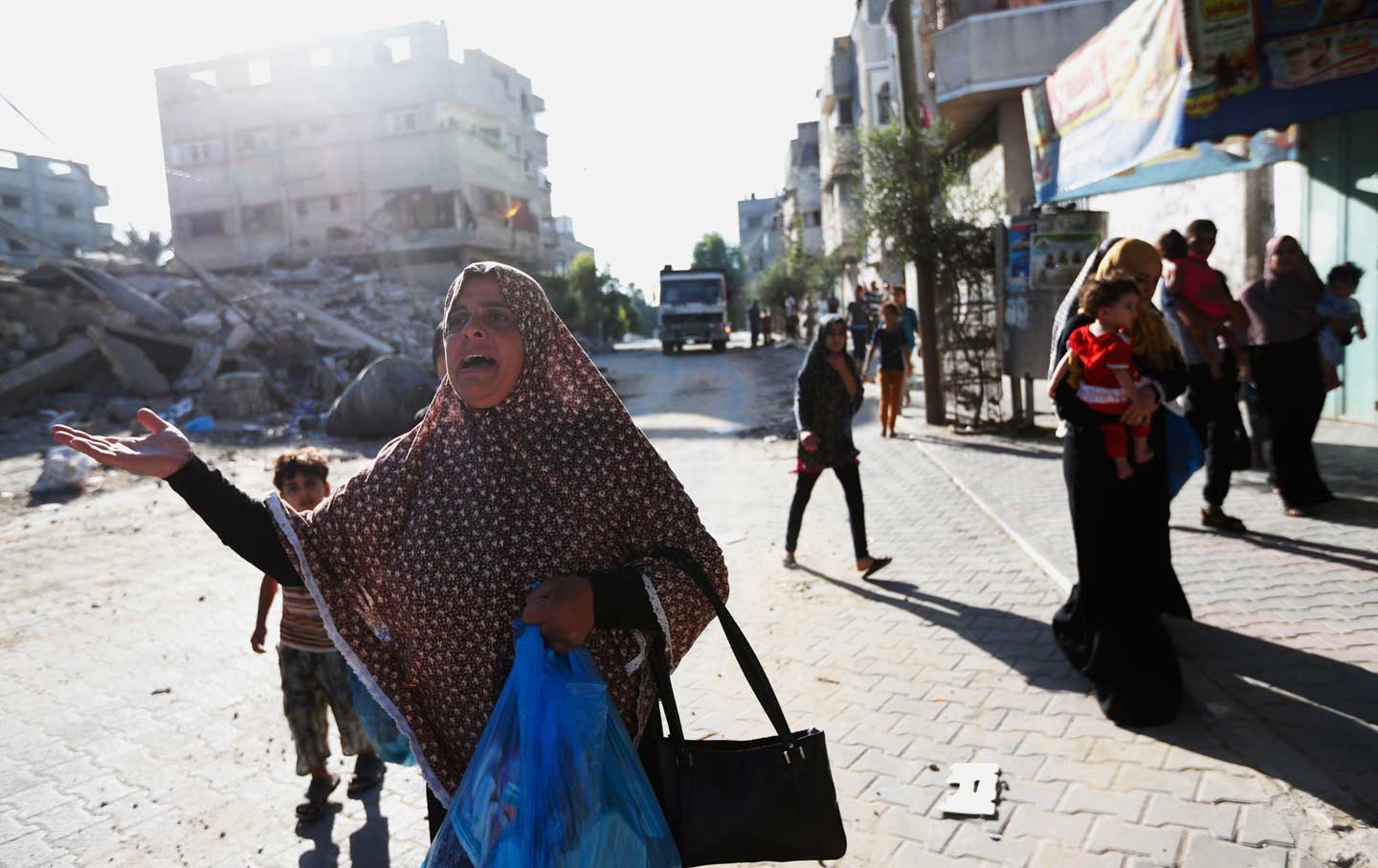 Last week, the New York Daily News did an interview with Bernie Sanders in which Israel’s 2014 assault on Gaza (Operation Protective Edge) came up. When the interview was published, all hell broke loose.

“He accused us of a blood libel,” Michael Oren, Israel’s former ambassador to the United States, fumed. “He accused us of bombing hospitals. He accused us of killing 10,000 Palestinian civilians. Don’t you think that merits an apology?” An Israeli cabinet minister dismissed Sanders’s “weird and loony statement.” The Anti-Defamation League (ADL) urged Sanders to “correct his misstatements.”

So, what did Sanders actually say?

He said, inter alia, that he supported Israel’s “right to exist as a Jewish state”; that “we cannot ignore the reality that you have large numbers of Palestinians who are suffering now, poverty rate off the charts, unemployment off the charts, Gaza remaining a destroyed area”; that Israel “cannot just simply expand when it wants to expand with new settlements…. the expansion was illegal, moving into territory that was not their territory, I think withdrawal from those territories is appropriate”; that he “absolutely” condemned “all terrorist acts. The idea that in Gaza there were buildings being used to construct missiles and bombs and tunnels, that is not where foreign aid should go”; that he opposed Palestinians going to the International Criminal Court; and that he believed Hamas was a “terrorist organization.”

None of this is exceptional. It’s just the “new normal” among liberal American Jews.

What, then, provoked the hysterical response? The allegedly libelous passages regarding the Israeli assault on Gaza read as follows:

I think it is fair to say that the level of attacks against civilian areas…and I do know that the Palestinians, some of them, were using civilian areas to launch missiles. Makes it very difficult. But I think most international observers would say that the attacks against Gaza were indiscriminate and that a lot of innocent people were killed who should not have been killed. Look, we are living, for better or worse, in a world of high technology, whether it’s drones out there that could, you know, take your nose off, and Israel has that technology. And I think there is a general belief that, with that technology, they could have been more discriminate in terms of taking out weapons that were threatening them.… I’m just telling you that I happen to believe…anybody help me out here, because I don’t remember the figures, but my recollection is over 10,000 innocent people were killed in Gaza. Does that sound right?… I don’t have it in my number [sic]…but I think it’s over 10,000. My understanding is that a whole lot of apartment houses were leveled. Hospitals, I think, were bombed. So yeah, I do believe and I don’t think I’m alone in believing that Israel’s force was more indiscriminate than it should have been.

Sanders got the casualty figure wrong. Some 2,200 Gazans were killed, of whom approximately 1,500 were civilians, 550 children. But he kept repeating that he couldn’t remember the exact number. He also pointed out, “I’m not going to run the Israeli government. I’ve got enough problems trying to be a United States senator or maybe president of the United States.” Is it a sin if a candidate vying for office in an American election and aspiring to serve the American people doesn’t remember precisely how many Palestinians were killed in each of Israel’s successive massacres? (Israel has carried out eight major operations against Gaza in the past 12 years.) It’s also not as if Israel is incapable of killing so many people. It killed 10,000–18,000 Lebanese and Palestinians, overwhelmingly civilians, during its 1982 invasion of Lebanon (Operation Peace for Galilee). Oren says that claiming Israel bombed hospitals during Protective Edge is a blood libel. But Israel did in fact destroy or damage 17 hospitals and 56 primary healthcare centers during the operation. Sanders was also correct in stating that many Gazan dwellings were leveled. In fact, Israel destroyed 19,000 homes.

“We entered Gaza…with an insane amount of firepower.” —soldier’s testimony (Breaking the Silence)

The gravamen of Sanders’s criticism is that Israel used “indiscriminate” force during Protective Edge, “and that a lot of innocent people were killed who should not have been killed.” In a subsequent CNN interview, he accused Israel of using “disproportionate” force. Were these unreasonable statements? Consider what Israel’s own combatants had to say after Protective Edge. These testimonies were compiled by Breaking the Silence, an Israeli nongovernmental organization comprising former Israeli soldiers. None of the hundreds of eyewitness accounts collected by this organization over more than a decade have ever been exposed as false, and all of them were approved for publication by Israel’s military censor. The politics of Breaking the Silence are not aberrantly leftist (it does not support the Boycott, Divestment, and Sanctions movement, or BDS, and opposes criminal prosecution of Israeli officers), while most of the soldier-witnesses do not even appear contrite. The criminal dimensions of Protective Edge can be gleaned from these Israel Defense Forces (IDF) testimonies:

When we left after the operation, it was just a barren stretch of desert…. We spoke about it a lot amongst ourselves, the guys from the company, how crazy the amount of damage we did there was. I quote: “Listen man, it’s crazy what went on in there,” “Listen man, we really messed them up,” “Fuck, check it out, there’s nothing at all left…, it’s nothing but desert now, that’s crazy.”

I remember that the level of destruction looked insane to me.

We entered Gaza…with an insane amount of firepower.

It all looked like a science fiction movie…serious levels of destruction everywhere.… [E]verything was really in ruins. And non-stop fire all the time.

Before the entrance on foot [to the Gaza Strip], a crazy amount of artillery was fired at the entire area.… Before a tank makes any movement it fires, every time. Those guys were trigger happy, totally crazy.

The explosions’ effects cause major amounts of damage, but that doesn’t interest anyone. “Use it, use it, explosives can’t be taken back,” the platoon commander says, “I don’t want to leave explosives on me.”

[Y]ou saw crazy wreckage, it was a real trip.

Our view was of the center of the Strip. Let’s say it was a real fireworks display. From a distance it looked pretty cool.

[Y]ou’re shooting at anything that moves—and also at what isn’t moving, crazy amounts.… [I]t also becomes a bit like a computer game, totally cool and real.

It was total destruction in there—the photos online are child’s play compared to what we saw there in reality.… I never saw anything like it.

[T]he unfathomable number of dead on one of the sides, the unimaginable level of destruction, the way militant cells and people were regarded as targets and not as living beings—that’s something that troubles me.

[I]t’s destruction on a whole other level.

The air force carries out an insane amount of strikes in the Gaza Strip during an operation like “Protective Edge.”

To avoid mind-numbing redundancy, this table omits the succession of combatants who testified that the Israeli army’s modus operandi during the operation was shoot to kill anything that moves, often on explicit orders, but also because it was “cool.”

If blood libel denotes false representations of the Jewish people that induce anti-Semitism, then the likes of Oren and the ADL, who pretend to represent the Jewish people as they whitewash Israel’s criminal conduct, incarnate a blood libel. By contrast, Sanders’s noble candidacy—his identification with the underdog and, yes, his recognition of Palestinian suffering—is a redemptive moment in the saga of modern American Jewry.