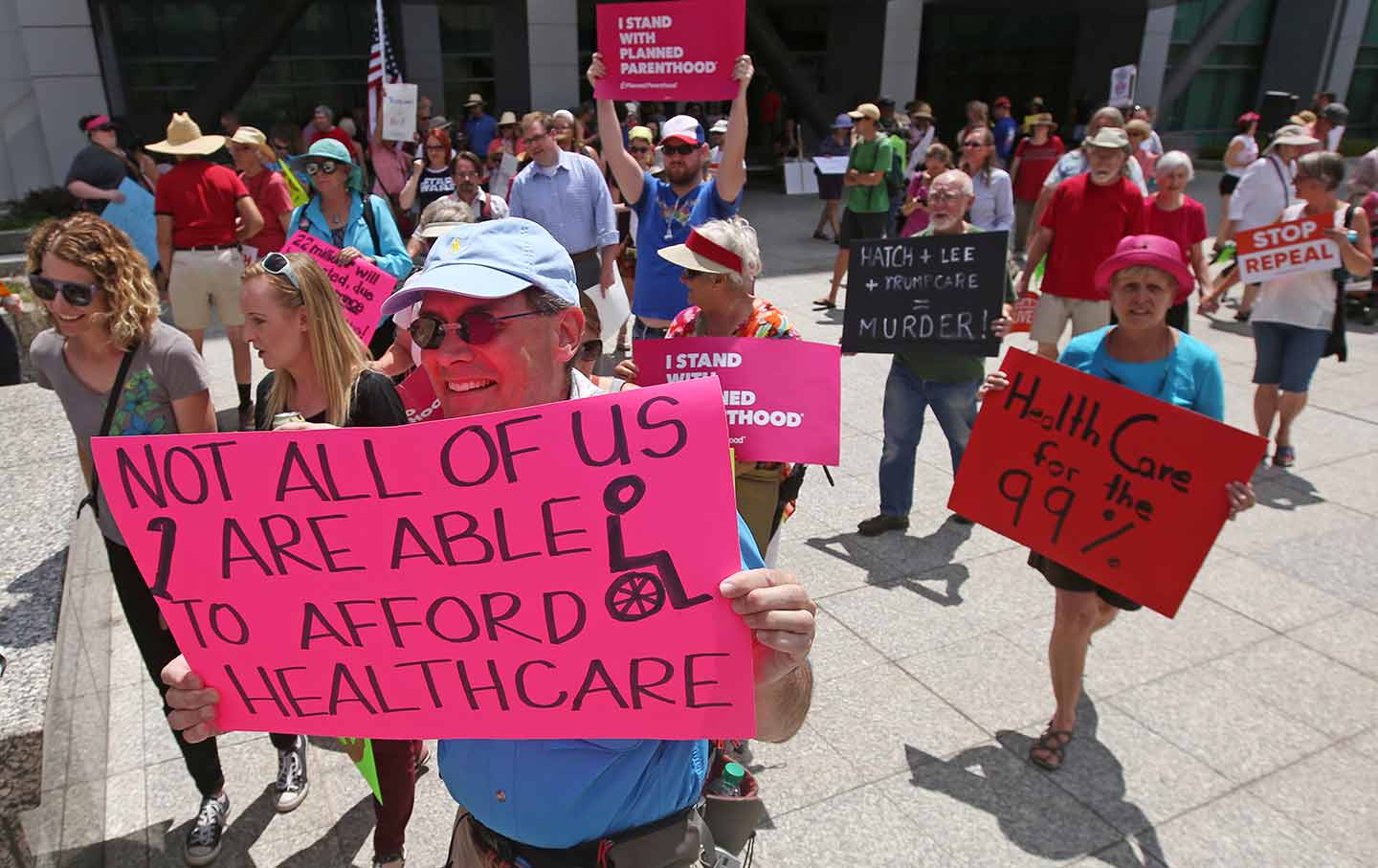 People protest against the Republican bill in the US Senate to replace the Affordable Care Act in Salt Lake City, Utah, June 27, 2017. (AP Photo / Rick Bowmer)

During the House of Representatives’ recent appalling debate over health-care reform, pundits liked to point out that the Senate is the more deliberative, serious body. The upper chamber, with its powerful moderate Republicans, would of course craft something more reasonable than the House bill. Instead, the Senate made the lower chamber look like a bastion of civil democracy. Thirteen far-right white men went off in a corner and set the terms for the bill that would eventually emerge—one that the Congressional Budget Office estimates will cost 22 million people their health insurance by 2026, primarily by ending America’s decades-old commitment to giving the country’s poorest residents access to health care. 1

Institutions are important. Our government is built on a system of institutional checks and balances that are meant, in part, to rein in extremism. One reading of the first six months of the Trump era is that those institutions work: The lower courts, at least, blocked the travel ban, Congress is conducting investigations, and journalism is rising to the challenge of an administration hostile to the First Amendment. But institutions are only as strong as the principles of the people in them. And an alternative reading of the Trump era thus far is that the people who pride themselves on being the serious, principled keepers of our institutions are missing in action. 2

States will have to massively raise taxes or make Medicaid cheaper by ending long-term care for seniors and people with disabilities.

That’s certainly the story of the Senate’s health-care bill. It’s not yet clear, as this column goes to press, how the chamber will vote. But it is already clear that there will be nothing like a meaningful discussion of health-care policy under the current Senate leadership. There are certainly important questions to be asked about insurance markets under the Affordable Care Act, and about how to manage Medicaid’s share of both state and federal budgets. But if we were really debating those things, the Senate’s bill would be a nonstarter for several people in the Republican caucus. 3

Consider two senators, Rob Portman of Ohio and Shelley Moore Capito of West Virginia. They represent two of the states that would be most devastated by either the House or Senate bill, and both have reputations as moderate, serious Republicans who can be counted on to hold the reasonable center against the extremes of American politics. How did they react when Senate majority leader Mitch McConnell finally allowed us all to see the bill that he and his white male colleagues had crafted? Both senators quietly wrung their hands over its vision for Medicaid—while any honest reading of the bill should have sent them screaming to the ramparts of the resistance. 4

The ACA’s greatest political sin was reaffirming that government has a role in ensuring equity for all Americans.

The largest, most consequential proposal in the Senate bill is the same as in the House version: ending Medicaid as we know it. It’s not just a repeal of the Affordable Care Act’s Medicaid expansion; both bills would cripple the federal government’s partnership with states on health insurance for the poor and disabled. Rather than paying a fixed share of all costs, the federal contribution would be capped and dispersed in a block grant to each state. Which is to say, states would be left holding the fiscal bag on a program that is second only to K–12 education in most state budgets. 5

The devil’s choice that follows is clear in both West Virginia and Ohio. Because so many West Virginia residents are mired in poverty, the state’s Medicaid program is uniquely dependent on federal support: It ranks just behind Mississippi in the share of costs that the federal government picks up—roughly 73 percent, according to the Kaiser Family Foundation. Ohio, meanwhile, is among the nation’s most populous states and thus has one of the largest and most expensive Medicaid programs. In both cases, without a true federal partner, state officials will either have to massively raise taxes or cut the cost of their Medicaid programs dramatically. And the only way to make Medicaid cheaper is to get rid of its largest cost: long-term care for seniors and people with disabilities. 6

Given this simple math—and the political ramifications for state officials forced to kick people out of nursing homes—you’d think that centrists like Portman and Moore Capito would be leading a party revolt. Yet both senators have moved just as quietly and cautiously as they and other GOP centrists have for two years now, ever since Trump descended an escalator in midtown Manhattan to deliver a racist word salad that would win him the presidency. 7

Where is the principled outrage of the Republican center? Where are the individuals who have the power to move our institutions against extremism? We may be waiting some time for them to finally speak up, and the Senate’s health-care bill suggests why: because the Trump era presents an opportunity to complete the agenda that has animated the right for 50 years. 8

The “administrative state” that White House chief strategist Steve Bannon has vowed to destroy is actually the federal apparatus we built in order to make good on the promises that the postwar movements for social justice won. We reached consensus that it was time to finally take down the racial and gender hierarchies that America’s founders built, and a set of political and economic rights followed from that agreement. But where are those rights now? Welfare—a program designed to give poor women a fighting chance at the American dream—doesn’t exist in any meaningful way. Schools are as separate and unequal as ever. The Supreme Court has disarmed the Voting Rights Act. The system we created to allow non-European immigrants into the country has collapsed from willful neglect. 9

Medicaid is perhaps the largest remnant of the Great Society, providing insurance to nearly one in five Americans. The ACA’s greatest political sin was its reaffirmation of the idea that informs the program: that government has a role in ensuring equity for all Americans. The question now for serious, responsible Republicans is this: Are they more dedicated to their party leadership’s jihad against that idea, or to the citizens they actually represent?10