Should five people stand in the way of Congress’s performing its constitutional, historical, and moral duty? Despite widespread agreement among Democrats that the president has committed multiple impeachable offenses, fear of the political consequences of proceeding with impeachment continues to dominate the behavior of House Democrats. They need not be so worried.

The political calculations and hesitation about proceeding with articles of impeachment are rooted in an incorrect understanding of what happened in the 2018 midterm elections and a vastly overstated estimate of the number of congressional districts where moderate voters made the difference. House Democrats won 235 districts in 2018, giving them a 17-seat majority. Contrary to the widespread political conventional wisdom, the defection of Trump voters to the Democratic side determined the outcome of contests in only five of those districts.

Democratic Georgia Representative Hank Johnson, a member of the Judiciary Committee, articulated the concerns of his fellow Democrats when he said, “I think we have to pay close attention to what’s going on in the 30 or so swing districts, what are those people thinking.” But the idea that there are 30 Democratic-held districts where Trump supporters are the dominant force is empirically unsound and mathematically unsupported. First of all, only 21 of the seats won by Democrats in 2018 were in districts won by Trump in 2016—fewer than half the seats that Democrats flipped. Second, 16 of those 21 districts are less moderate than most analysts think they are.

A frequent media and strategist talking point is that many new members of Congress come from districts that Trump won in 2016. That assertion implies that in those districts, many Trump voters switched allegiances in 2018 and backed the Democratic congressional candidate. Those new members of Congress, the thinking goes, are vulnerable to a backlash from moderate and conservative voters who could see impeachment as Democrats overreaching.

While on first impression it’s not illogical to draw such a conclusion about the implications of a Trump-won district, a closer read of the numbers and data reveals a very different picture. In fact, it reveals the opposite.

Quite simply, of those who voted in 2018, more people who voted against Trump in 2016 came back out to vote in the midterms than did those who voted for him in the last presidential election. In the decisive midterm races that flipped the House to the Democrats, significantly more Hillary Clinton voters returned to the polls than did Trump voters.

The current enthusiasm gap between the parties, fueled by the passion of the resistance, compelled Democratic voters to turn out in historic numbers for midterm elections. In 2018 in most of those flipped districts, Trump’s supporters, more satisfied with the political status quo now that they had their preferred person in the White House, did not cast ballots in equally large numbers as Democratic voters did.

In the pivotal congressional races that changed hands, the total number of Democratic votes was fully 99 percent of what the Democratic turnout was in the 2016 presidential election—an astounding level of participation in a midterm contest. The Republican vote, by contrast, dropped to 88 percent of 2016’s. And even with such an impressive level of Democratic turnout, the number of votes for Democrats in these districts still did not exceed those they cast for Clinton in 2016, further suggesting that it was the original anti-Trump voters who made the difference. Logically, if large numbers of Republicans were defecting to the Democratic ranks, the total number of Democratic votes would increase. But it didn’t. The following diagram illustrates what happened: 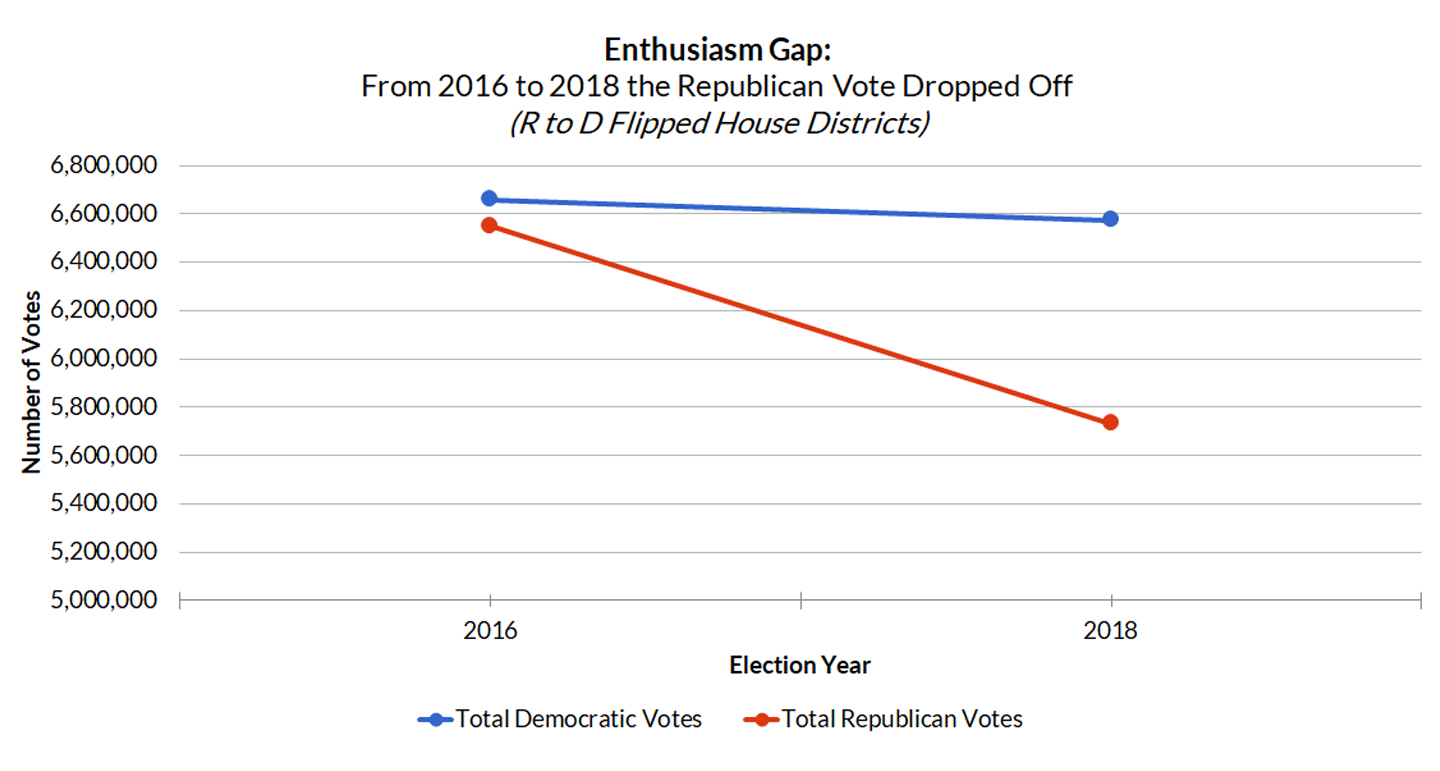 Looking more closely at the individual districts that changed hands in the midterms, the same basic pattern holds, for the most part. In 81 percent of the Democratic pickups, voters who opposed Trump in 2016 were largely responsible for flipping the seats in 2018.

This pattern can be seen by comparing the raw vote totals from 2016 with those from 2018. In the 21 now-Democratic districts won by Trump, seven races saw a decrease compared with Clinton’s 2016 numbers (the original anti-Trump voters). In six other seats, the Democratic candidates saw bumps in their vote totals over Clinton’s, suggesting there may have been some Republican voters drifting to the Democratic camp. But in those six races, the number of Trump voters who didn’t vote for their Republican congressional candidate was so large that the defections were not needed for the Democrat to prevail.

That leaves eight districts where voters who previously supported Trump may have been decisive in flipping seats. In three of those, other factors were likely more decisive than the vote switching of disaffected Republicans. In Georgia, for example, Stacey Abrams’s campaign brought waves of new voters to the polls, boosting Lucy McBath to her narrow win in the state’s sixth district. 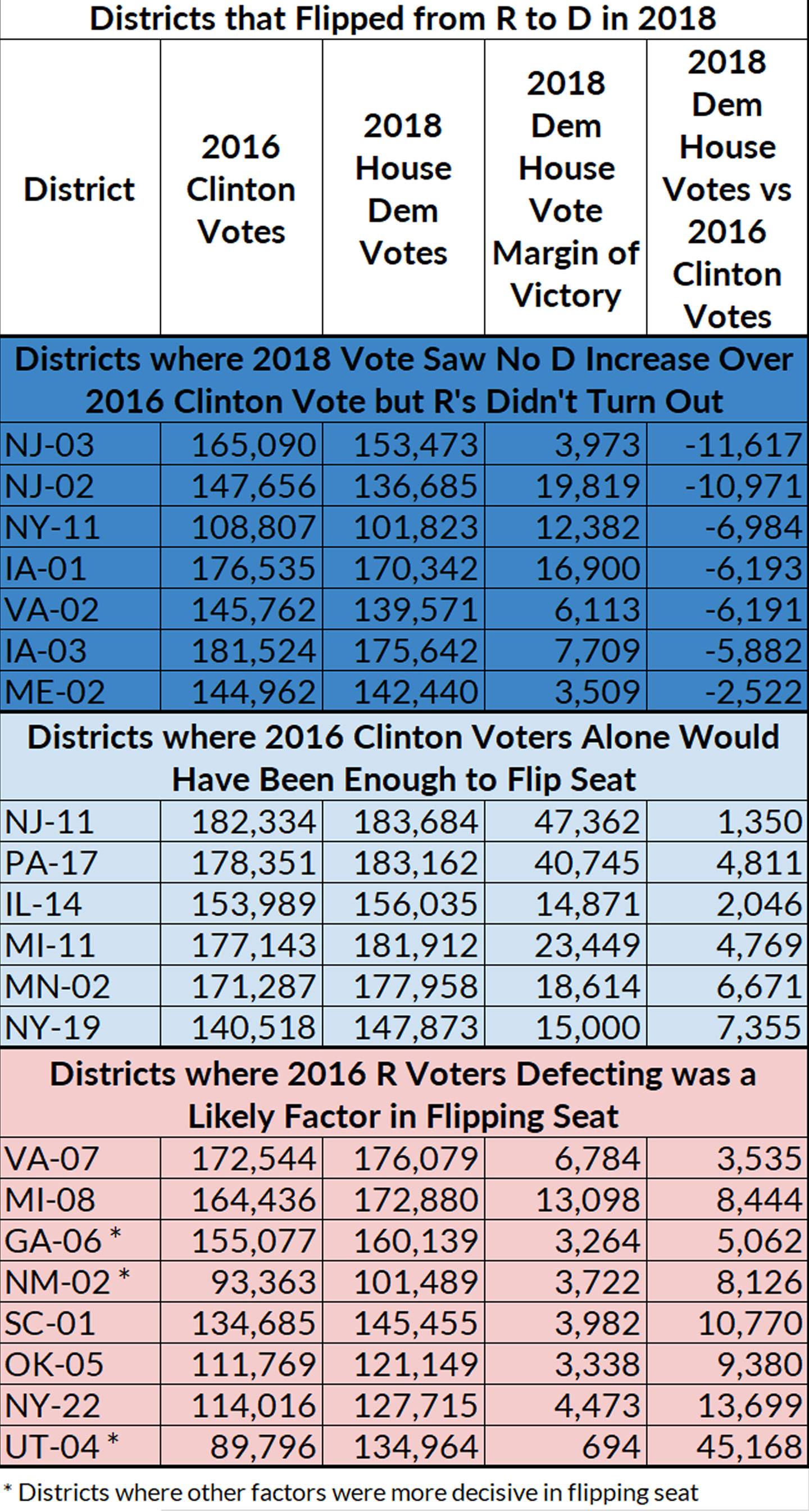 A description of the methodology behind these calculations is available by clicking the above image. Steve Phillips

The implications of this reality are enormous. The voters who flipped control of the House opposed Trump from the start and came back out in historic numbers in 2018 to rein him in. (According to exit polls, a plurality of midterm voters said their motivation was to oppose Trump.) Far from being alienated by impeachment proceedings, they want Congress to hold this man accountable.

Even in those seats where Republican defections did make a difference, impeachment would just as likely solidify the Democratic advantage as erode it. Something caused those Republicans who defected to abandon Trump, and it stands to reason that meticulously documenting and explaining to the American people exactly how he obstructed justice, destroyed societal norms, and undermined our democracy could reinforce and validate the doubts that caused them to abandon him in 2018.

It is not always the case that doing the right thing is supported by the electoral calculus. But when it comes to impeachment of the current occupant of the White House, that is certainly the case. The political imperative of this moment is actually the opposite of what many are concluding. Energized anti-Trump voters delivered the speaker’s gavel to Nancy Pelosi. Those voters now expect Congress to do what they were elected to do: impose consequences for the destruction of our democracy and the flouting of our constitutional norms. That requires courage, not caution.