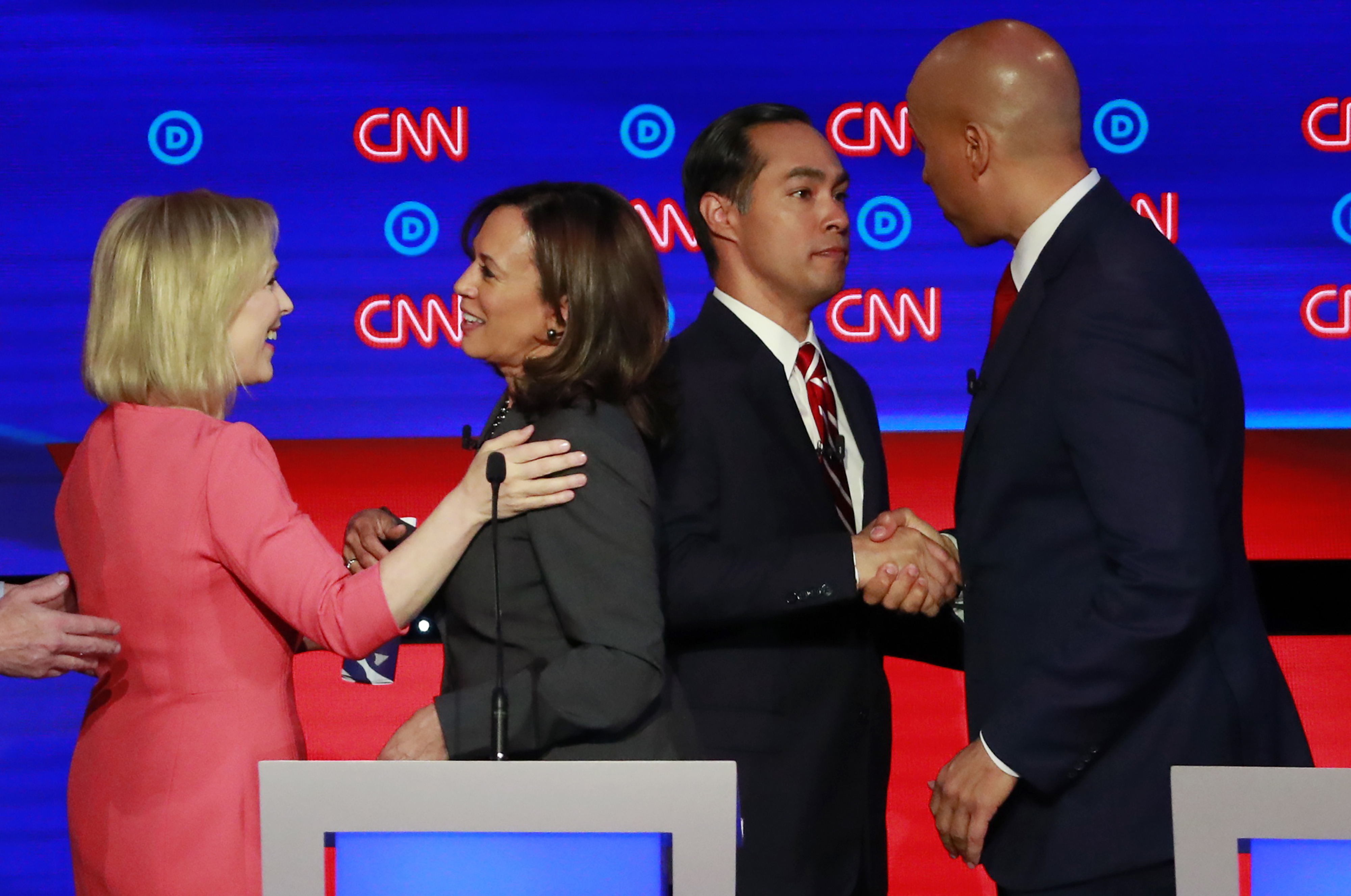 A few hours before the second round of Democratic presidential primary debates began in Detroit’s opulent Fox Theatre, union activists and their allies gathered around 13 miles away at a United Brotherhood of Carpenters and Joiners hall near General Motors’ transmission plant in Warren. The factory was scheduled to be unallocated—corporate-speak for closed—the day after the Democrats left town, leaving 260 United Auto Workers members and another factory town as victims of President Trump’s lies. The Carpenters and Joiners’ union hall has a large auditorium and would have been a much better site for a Democratic debate. A forum in Warren on the eve of a plant closing would have put an urgent focus on deindustrialization and the future of work—issues that got scant attention in Detroit. If Warren was too far for the motorcades to travel, the candidates and the moderators could have walked two blocks from the Fox Theatre to the historic Central United Methodist Church, where Michigan Representatives Rashida Tlaib and Debbie Dingell gathered on the afternoon of the second Detroit debate to show solidarity with families that have sought shelter in local churches to avoid deportation. What a remarkable debate that would have been if the candidates had gone to that epic sanctuary to take questions from immigrants, refugees and the activists who have rallied to defend them against the “send her back” cruelty of our times.

Unfortunately, the point of the two nights of debates in Detroit wasn’t to go deep on policy or recognize the anxiety of working Americans. Since the politicians elbowed the League of Women Voters aside in the 1980s, presidential debates have become ever more elaborate made-for-TV spectacles. So far this year, the showbiz kids have outdone themselves, with boxing ring introductions for the political pugilists and provocative questions intended to get them trading rhetorical blows. The triumph of commercial and entertainment impulses over civil and democratic values was so clear that some candidates even called out these pathologies from the stage. “You know what the talking heads couldn’t stop talking about after the last debate?” asked Andrew Yang. “It’s not the fact that I’m somehow number four on the stage in national polling. It was the fact that I wasn’t wearing a tie. Instead of talking about automation and our future, including the fact that we automated away 4 million manufacturing jobs—hundreds of thousands right here in Michigan—we’re up here with makeup on our faces and our rehearsed attack lines, playing roles in this reality TV show. It’s one reason why we elected a reality TV star as our president.” 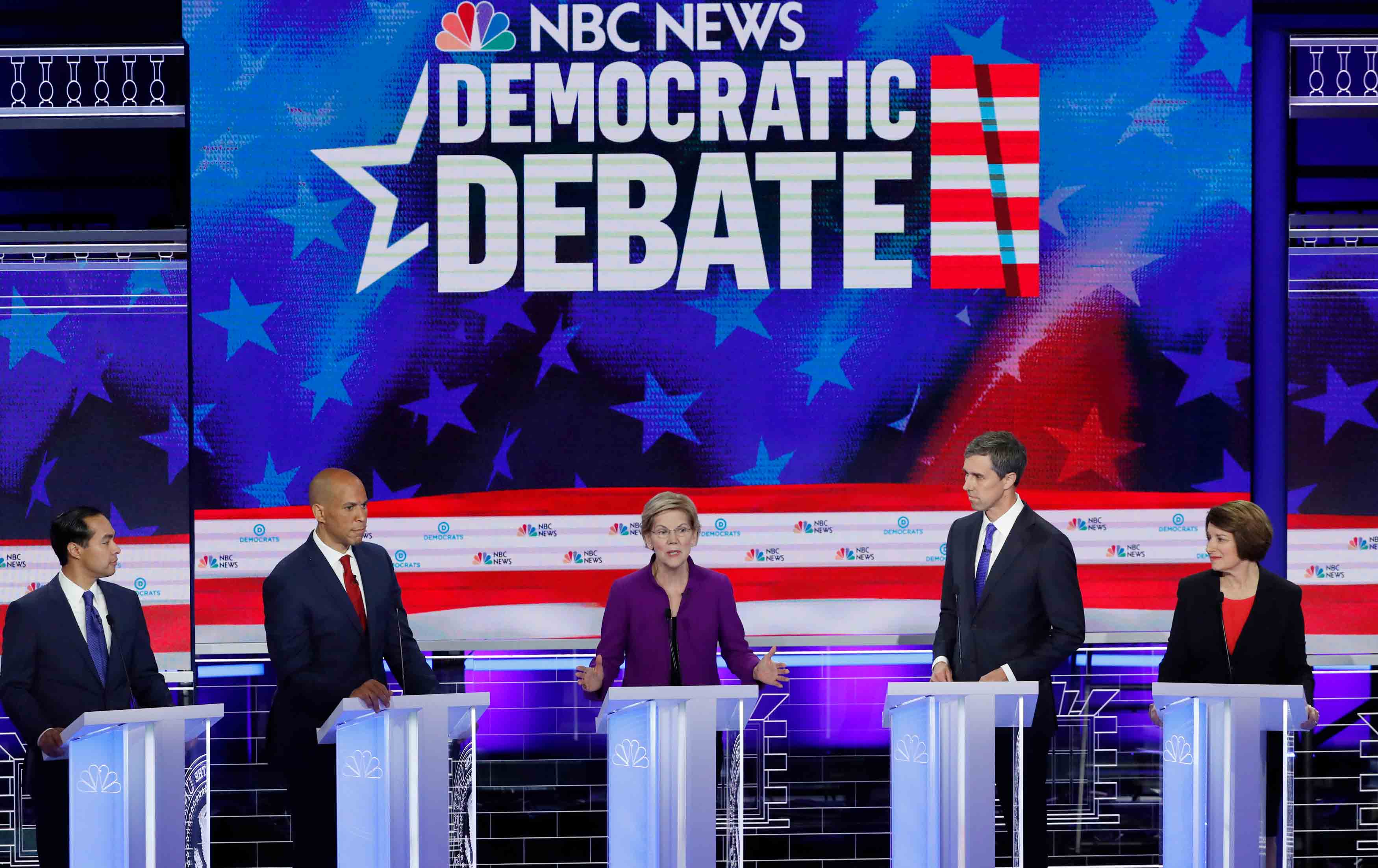 Yang’s point was well taken, but he didn’t speak to the worst part of the debates at the Fox: the embarrassingly biased questions. Drawn not from the concerns of the communities and people hurting in this country but from what Julie Hollar of the watchdog group Fairness & Accuracy In Reporting identified as “right-wing assumptions and talking points,” the questions asked by the CNN moderators in Detroit were deliberately dumbed down and narrowed the discourse. It got so bad during a discussion of Medicare for All that Vermont Senator Bernie Sanders, fed up with the hosts suggesting that getting rid of private insurance companies and replacing them with a robust national health care plan was politically untenable, took the fight directly to the network’s Jake Tapper: “What I am talking about and others up here are talking about is no deductibles and no copayments, and Jake, your question is a Republican talking point. And by the way, the health care industry will be advertising tonight on this program.” Tapper’s response was a curt “Thank you, senator. Your time is up.” He wasn’t going to allow a discussion about the influence of corporate advertising on the corporate media—especially considering that the Partnership for America’s Health Care Future, a coalition funded by insurance and pharmaceutical giants, was indeed airing ads that savaged Medicare for All that night.

Sanders’s response pointed to the debate we should be having. But the questions that were asked in Detroit soon degenerated into absurdity, especially when they conjured a beloved for-profit insurance industry under assault from nurses and nuns asserting that “health care is a right.” In fact, Americans don’t love the health insurance industry. In a 2017 Bloomberg survey, they rated it below Wall Street and even Congress. Yet the moderators and the centrist candidates played on fears that any big change to the system might make bad circumstances worse. Sanders and Massachusetts Senator Elizabeth Warren did their best to counter this malarkey; now it’s time for the rest of us to speak up.

The work of choosing a Democratic standard-bearer to beat Donald Trump is too important to let it get bogged down in debating Republican talking points. But the debates spotlight a larger issue: “We desperately need serious, independently run debates, not over-the-top, industry-friendly spectacles of the sort put on by CNN—and endorsed and gate-kept by the major parties,” said FAIR’s Hollar.

Getting better debates won’t be easy. The networks and the parties will do their best to maintain a monopoly on the process. But progressive Democrats can and should demand deeper and sharper lines of questioning and more diverse moderators.

Activists should also keep pushing for single-issue debates that ask candidates to go deep on existential concerns such as climate change, racial justice, gun violence, and, yes, the immigration and future-of-work issues that Michigan activists sought to highlight. If the networks and the party bosses won’t organize such debates, then grassroots activists should step up, as the New England group Rights & Democracy will do in October with its plans for a People’s Presidential Forum at the University of New Hampshire’s campus in Durham. “A truly democratic presidential debate would look a lot different [from those organized by the networks and the parties],” the organizers argue. “Real people would decide the agenda and ask the questions, and wealthy and powerful interests would be sidelined.” We the people should demand nothing less.