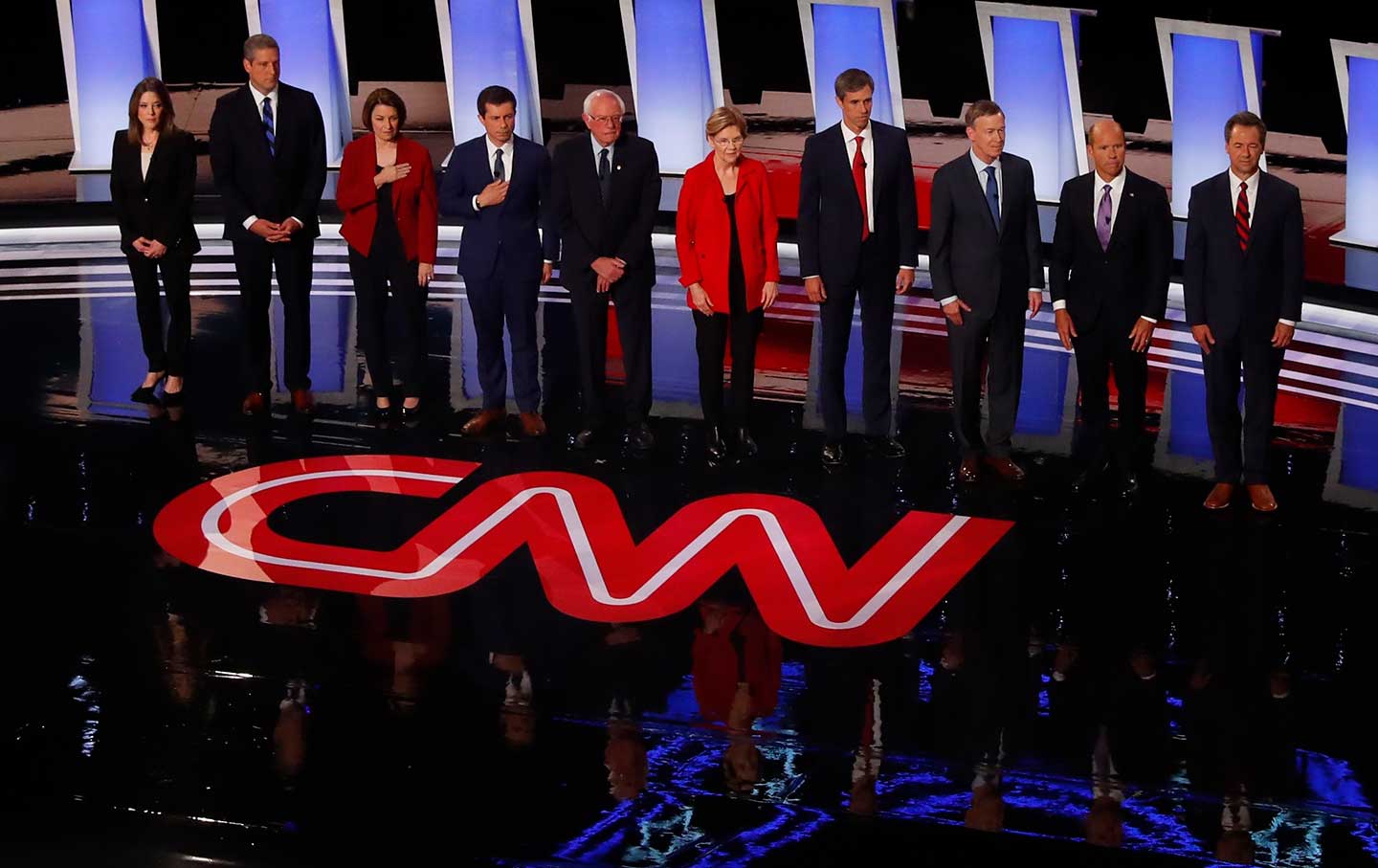 Watching the first round of the Democratic presidential debates, I kept thinking about The Hunger Games—a dystopian fantasy in which contestants from all across the country are forced to kill one another on television for the entertainment of a subjugated populace. Because, as Kamala Harris figured out right away (and Joe Biden, showing all the self-awareness of President Snow, found out the hard way), going for Miss Congeniality in an elimination game is a good way to end up dead. As is lying low and hoping nobody notices you.

But as the first night of round two drew to a close a few hours ago, I found my mind drifting—especially during the seemingly endless longueurs when John Delaney repeated his audition for the part of corporate attack dog—to a different kind of free-for-all that also just ended here in New York a few miles from Nation HQ. On Sunday, a 16-year-old kid named Kyle Giersdrof won $3 million in the Fortnite World Cup in front of thousands of spectators at the Arthur Ashe Stadium in Queens—and an online audience of millions. If you’ve never heard of Giersdorf, you’re in good company; he was a relative unknown who beat some of the most famous names in gaming (Pete Buttigieg, eat your heart out!). And if you’ve never heard of Fortnite, it just means you probably don’t have a teenage son.

The Centrists Did Not Hold

In the most popular version of the game, Fortnite Battle Royale, up to a hundred players compete to be the last person standing (which in real life usually means the last boy standing, since the player base, unlike the Democratic Party, is overwhelmingly male). Interestingly Fortnite’s developer, Epic Games, also released a cooperative version, Fortnite: Save the World—a kind of cross between Minecraft and Left4Dead in which players cooperate to save the earth from a zombie apocalypse. Oddly enough, the cooperative version is a lot less popular.

Which brings me back to tonight’s Dem-on-Dem action, and a few random questions:

Can’t wait to say Bye-bye, Beto! (more clearly than ever running for Veep—which would be fine, except Texas could really use a Democratic senator), Hasta la vista, Hickenlooper!, and Time to retire, Ryan! Let Klobuchar and Bullock—whose “I’m a pro-choice, pro-union, populist Democrat” had me going for a minute, till I realized he just meant he was willing to play Trump’s game on immigration—fight it out over the Biden lane.

That leaves Bernie and Warren, who both came out looking like champs tonight. (That might have something to do with the way their “radical” proposals actually grapple with our catastrophic reality. Just saying…) Which brings me back to The Hunger Games. As you’ll doubtless recall, even though the rules of the games call for a war of all against all, Katniss Everdeen (played by Jennifer Lawrence in the film trilogy) defies the organizers by refusing to kill her friend Peeta Mellark. Instead, the two of them help each other, see off all their foes, and end up leading a political revolution.

Someone ought to make sure Bernie and Warren have seen the film. Or maybe someone already has, because, despite the one brief moment when Bernie turned his weaponized crankiness on Warren (“I’ve got a plan, too”), for most of this evening we got to watch the most powerful tag team in American politics take on the Democratic Party centrists and reduce them to matchsticks. Everyone says they’ll have to turn on each other sometime—and maybe they’re right. But they said the same thing about the Mockingjay.

Oh, and while I’m dreaming utopian dreams, maybe Epic Games can organize the next debate?