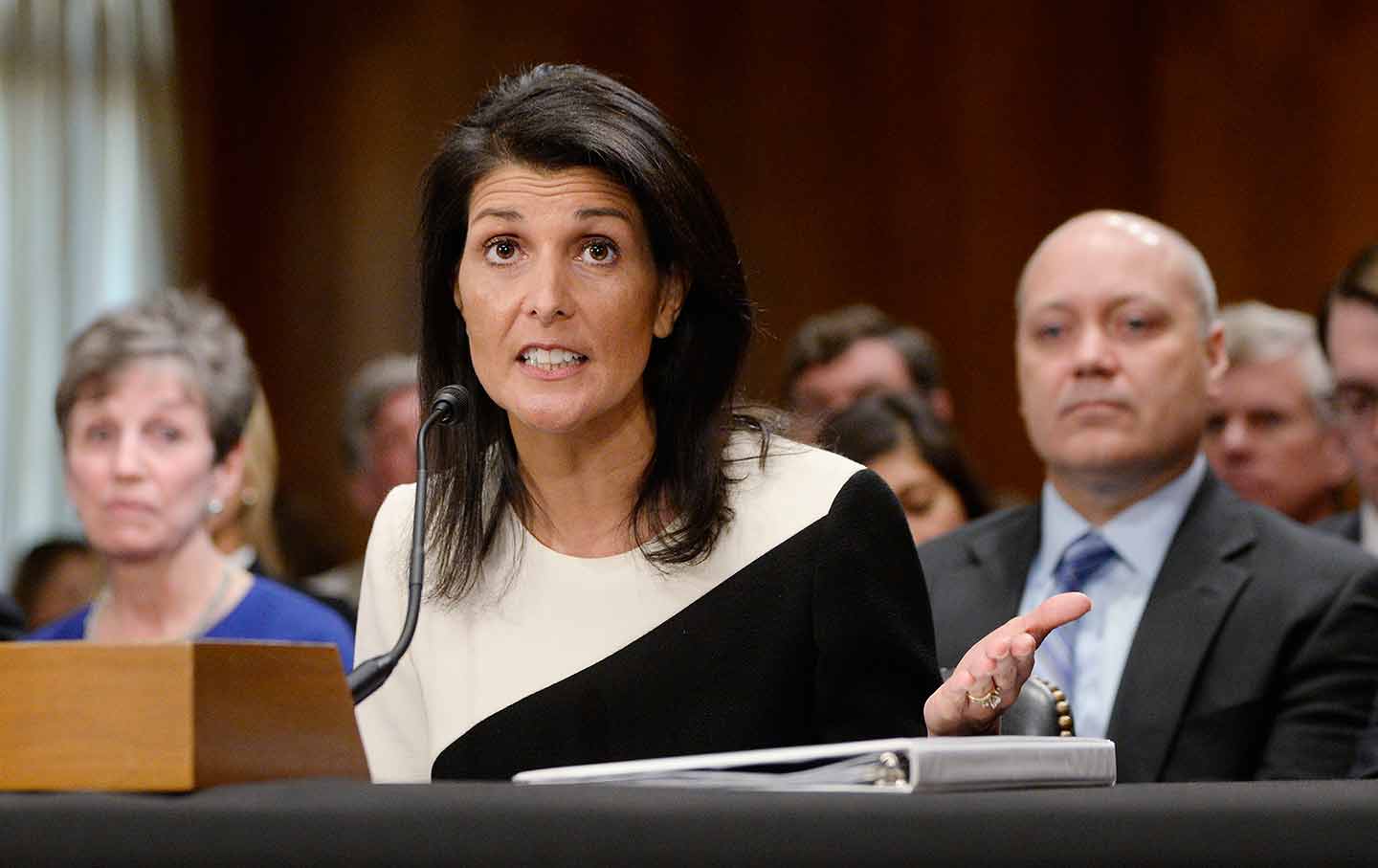 Donald Trump’s nominee to serve as US ambassador to the United Nations had an easy ride through the confirmation process, as Democratic senators generally joined Republican senators in abandoning their constitutionally mandated duty to thoroughly review the nomination of Nikki Haley. But there was one essential—and instructive—exchange when Haley appeared before the Senate Foreign Relations Committee.

Virginia Senator Tim Kaine steered the discussion toward the role of a free press in any democracy—but especially in this democratic republic.

“Authoritarian nations around the world are cracking down on freedom of the press. And that is a freedom that is part of the 1947 UN Declaration on Human Rights,” explained the 2016 Democratic nominee for vice president, who, unlike many members of the Trump team, actually has substantial experience dealing with international issues. Noting that “even nations that are allies, for example Turkey and Egypt where we have significant alliances, have seen real declines in press freedom,” Kaine asked, “What can be done through the UN to promote a free press around the world?”

“Well, you know,” she said. “I think the United States has always promoted freedom of the press. And while those of us that have been in elected office may not always like it, it is the way it’s supposed to be. The press has a job to do and we should allow them to do it. And so I think, again, that goes in with American values that we should talk about that. And that’s something that I’d be happy to express.”

Kaine carried the discussion forward: “So you agree that efforts to restrict the press would be a clear violation of not just the UN Charter but American values.”

Then the senator expanded upon his point, and things got complicated.

“And that would include blacklisting members of the press corps whose coverage you don’t like, ridiculing individual journalists who are—” he said.

Haley, catching the obvious reference to President Trump’s constant conflict with the press, interrupted Kaine and asked, “Are you trying to imply something?”

Kaine pressed her on the matter, which has gotten so serious that Reporters Without Borders headlined a recent report “Trump’s attacks on the media send dangerous message to world’s press freedom predators.”

Referring to the blacklists and personal attacks on journalists, the senator said, “That’s sort of a violation of our leadership role in trying to promote a free press, wouldn’t you agree?”

Haley did not quite say that she agreed. But she grudgingly admitted, “We do always want to encourage free press.”

What Kaine did was important.

He found a way to move the discussion about freedom of the press away from the constant chatter about Trump’s latest tweet, or White House Press Secretary Sean Spicer’s latest abuse of the basic premises of his position, or White House counselor Kellyanne Conway’s promotion of “alternative facts,” to a deeper discussion of what the United States stands for now that Trump and the Trumpkins are in charge. And of whether those who occupy positions of public trust in these time are ready and willing to defend freedom of the press.

The United States must, as Kaine suggests, “play a leadership role in trying to promote a free press”—abroad and at home. That’s a basic American premise. And it is not enough to criticize Trump’s excesses and abuses. It is necessary to ask whether his appointees and allies will respect—and defend—the First Amendment to the Constitution they have sworn to uphold.