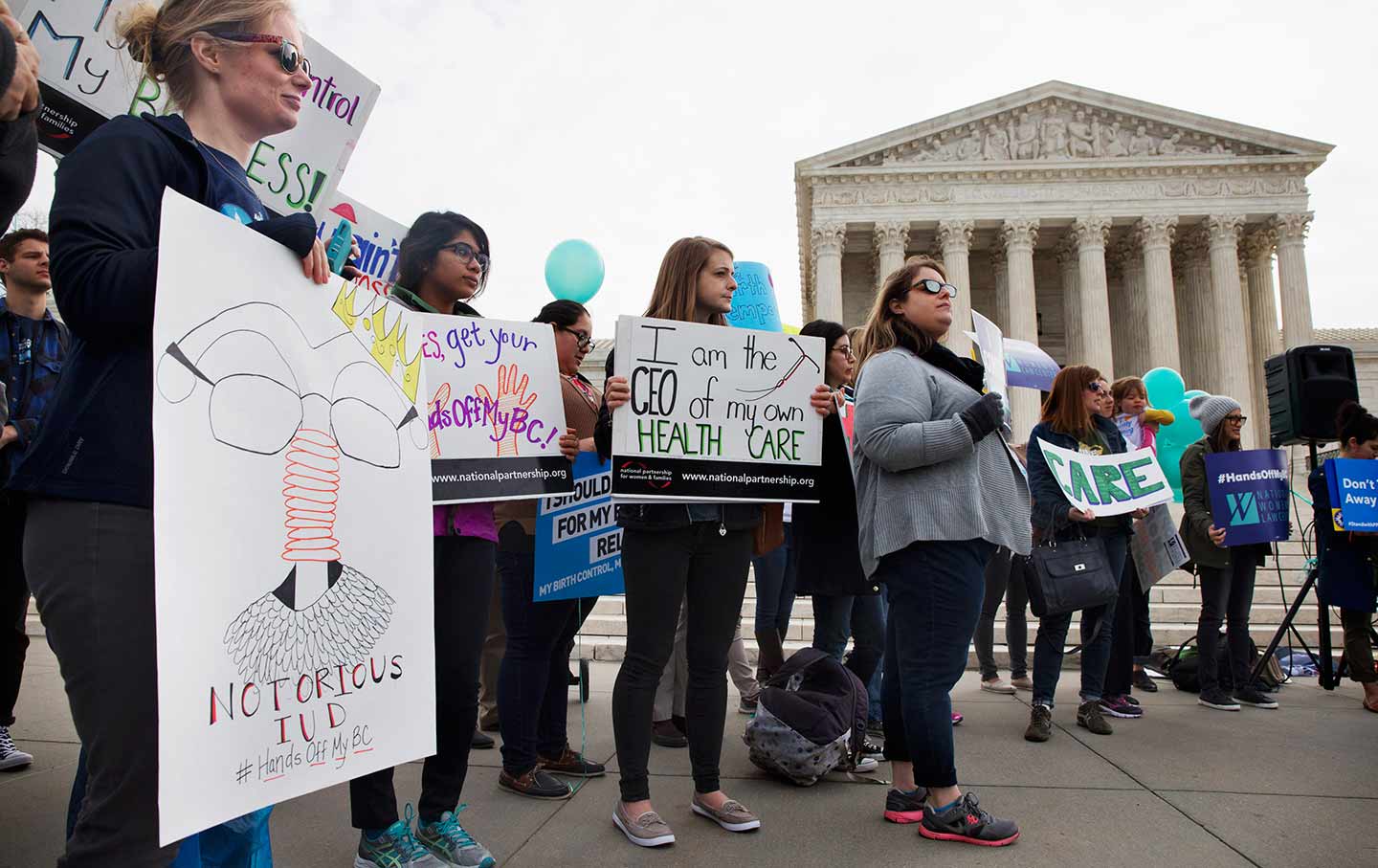 The nation’s women are closing up reproductive shop. Uteruses: blocked. Cervical mucus: thickened. No sperm shall meet egg. It’s a dangerous time to have a childbearing body.

Faced with the very real possibility that Republicans would try to repeal Affordable Care Act, and now that they might try again, a new cohort of women are choosing long-acting reversible contraception, often referred to by the acronym LARC. They fear rising copays and lack of access to abortion. LARCs include intrauterine devices and arm implants, and prevent pregnancy for three to twelve years—or, as many women note, about one to three presidential terms.

Long-acting birth control methods have become steadily more popular in the United States in the last decade as the horrors of earlier versions like the Dalkon Shield recede from collective memory. LARCs have been popular in other parts of the world for longer. According to a study from the Guttmacher Institute, IUD and implant use grew from 2 percent in 2002 to nearly 12 percent in 2012. However, the last few months have seen a jaw-dropping upward spike. Shortly after the election, Planned Parenthood reported a 900 percent increase in birth control appointments scheduled. Many women get IUDs and implants at private doctors offices, and a study from athenahealth reports that those providers saw a nearly 19 percent increase in visits related to IUDs. Planned Parenthood’s numbers have dropped but remain higher than average.

“So many people are coming in for LARCs!” says Molly Knox, who works at a reproductive health clinic in Portland, Oregon. A large part of her job is birth control options counseling, and she says the she has noticed an increase in interest in long-acting methods since the election.

I spoke with nearly a dozen women from around the country who have gotten long-acting birth control since the election, and they’re preparing for the worst.

Amy Brantley is a twenty-one-year-old dispatcher in the Fayette County, Kentucky sheriff’s office. She got a hormonal Kyleena IUD in December. Before the election she didn’t think of IUDs as a serious option—she had heard that they cause weight gain and that the insertion procedure is painful—but as the copay steadily increased for her oral contraceptive she reconsidered. The month she decided to get her IUD she was charged $160 for birth control pills that her insurance used to cover in full. Getting the IUD was not just a political decision; it was an economic decision. As Amy says, “It’s really nice to not pay a monthly fee.”

Under the ACA, most insurance plans cover the full cost of long-acting contraception. Without that coverage the out-of-pocket cost for an IUD is up to $1000 and the cost of the Nexplanon arm implant is up to $800.

Another Kentuckian, Sarah Scott, got the Mirena IUD on her birthday, November 14. She is on her dad’s insurance, but she doesn’t see eye-to-eye with him politically. “My dad is a huge Trump supporter,” she says. “He really doesn’t support abortion.” Since she was a teenager, her dad’s attitude has been, “If you ever get pregnant, tell me. I’ll raise the child for you.” But that is far from what she wants: “I’m absolutely not letting that happen.” Sarah thinks a lot about Purvi Patel, who was sentenced to twenty years in prison in the neighboring state of Indiana for having a miscarriage. “I feel like I’m running out of options,” she says, and the crumbling reproductive health infrastructure in the state would seem to confirm her anxiety: there is only one clinic performing abortions left in Kentucky. To raise the stakes even higher, Sarah is afraid that if she became pregnant and got an abortion the bill would show up at her dad’s house. Her IUD is, among other things, about keeping her family together.

Dr. Kristyn Brandi is an OB-GYN at Boston University’s Boston Medical Center. Although her clinic hasn’t seen the dramatic increase in birth control consultation appointments that Planned Parenthood has, she says a larger portion of patients are interested in long-acting methods. She has also noted a change in the types of women asking for LARC. For decades IUDs were marketed toward women who had already given birth, although they are equally appropriate for women who hadn’t. Now, however, many young women who have not been pregnant are opting for them too. Dr. Brandi has noticed some patients linking their birth control to Trump, but not all. “Many have recently learned about IUDs through friends or social media.” We tend to think of contraceptive choice as an individual, private decision—and contraceptive needs do vary widely from person to person—but a culture shift is happening as information passes through networks of women, not just between individual women and health care providers.

Abby Doupnik, a labor organizer in Florida, is spreading the word about long-acting birth control as far as she can. Since getting an IUD the week after Trump’s inauguration, she has become a self-described “mini-spokeswoman” in her group of friends. “We’ll be at a bar and I’ll go on a twenty-minute rant about the benefits of IUDs.”

Dr. Brandi worries that LARC may not be the silver bullet many women are hoping for. There are reasons why someone might need to remove their IUD before it expires: it could change your bleeding pattern or make period symptoms worse, or you may want to become pregnant. Dr. Brandi’s concern is that if women lose coverage after getting their IUD, they might experience obstacles in having it removed. These concerns resonate Amy Brantley, the sheriff dispatcher: “I am a little bit worried about when it’s time to get it out. I didn’t think about it when I first got it in, but is going to be covered to get it out?” Unfortunately, long-acting contraception is an insufficient substitute for reliable access to medical care.

Furthermore, there is a troubling history of health care providers pressuring women of color to get IUDs without considering the preferences of those women. It is perhaps for this reason that the rates of use of LARC has held fairly steady for black women between 2009 and 2012 while they have grown substantially for all other ethnic groups. However, at 15 percent in 2012, Hispanic women have a higher rate of LARC use than black women or white women. Although LARCs are giving many women the opportunity to control their fertility in an increasingly hostile world, it is important to remember that their history is tinged with racism and coercion.

Several of the women I spoke with had been prescribed the pill in adolescence to help with acne. It didn’t occur to them to change methods until the election. Others were anxious about approaching the dreaded twenty-six-year-old age limit under which the ACA permits young people to stay on their parents’ insurance.

That was Emma Donnelly’s experience. She is a student at the University of Southern Maine and has a busy schedule juggling classes, work, and activism in local politics. She got the Nexplanon arm implant two days after the election because she couldn’t take time off to recover from the IUD insertion. Some people cramp for several days.

Cleo Spencer got an IUD in late January. She had been thinking about it for a while, she says, but the election “put fire in me.” She’s changed insurance twice in the last year—she’s been on her dad’s plan, her mom’s plan, and now is on a plan provided by her employer, a digital marketing agency in San Diego. The hoops have been exhausting: “You need a whole degree in how to understand this!” Although her recovery process was less than smooth—“When I first got it inserted it was terrible and I hated it!”—she is sticking with the IUD. After her experience with precarious insurance she wants to be as safe as possible.

Dr. Brandi’s clinic keeps IUDs and Nexplanon implants in stock, so they have been able to accommodate the influx of requests for long-acting contraception, but other clinics have to order each device individually. This can cause significant delays in getting devices to patients. Grace Habermann faced significant delays in getting her IUD. From start to finish, it took her nearly a month and a half to get an IUD at Baptist Health in Lexington, Kentucky.

It’s not always a specific policy proposal that motivates women to get a long-acting birth control method. Many are reacting to what they feel to be a generally anti-woman atmosphere. Cailey Oehler, an American woman who teaches English in Colombia, got a copper IUD in January. “There are very, very conservative people [in the US] who don’t think that access to birth control is a good thing in power right now. That made me think I might lose access.” She does not want to have children, and was attracted to the copper because it is the longest lasting method; it’s good for up to twelve years. The antagonistic social climate also motivated Brittany Evans, who got a hormonal IUD at the end of February. Although she mostly has sex with women, she got an IUD as a form of “defense” against sexual assault. She lives in Gainesville, and has witnessed increasing violence in town and on the University of Florida’s campus.

Women are on guard. Even though it’s not an adequate replacement for accessible, comprehensive healthcare, for many women long-acting contraception is much better than an unwanted pregnancy. Controlling their reproduction gives women the chance to enjoy their lives and organize for a world in which having a uterus is not a liability. We’re in a moment of fervent feminist organizing: at least 3.3 million people in America mobilized for the Women’s March, thousands demonstrated the value of their labor during the general strike on International Women’s Day, and according to a recent Fox News poll, more people have a favorable opinion of Planned Parenthood than they do of Donald Trump, Mike Pence, or Paul Ryan. And although the first Trump-era assault on the Affordable Care Act crashed and burned last Friday, these women know the attacks won’t stop. “Either I don’t plan or I plan way ahead,” says Sarah Scott. “If it was different—if Bernie Sanders or Hillary won maybe I wouldn’t have done it.” But they didn’t, so she did.