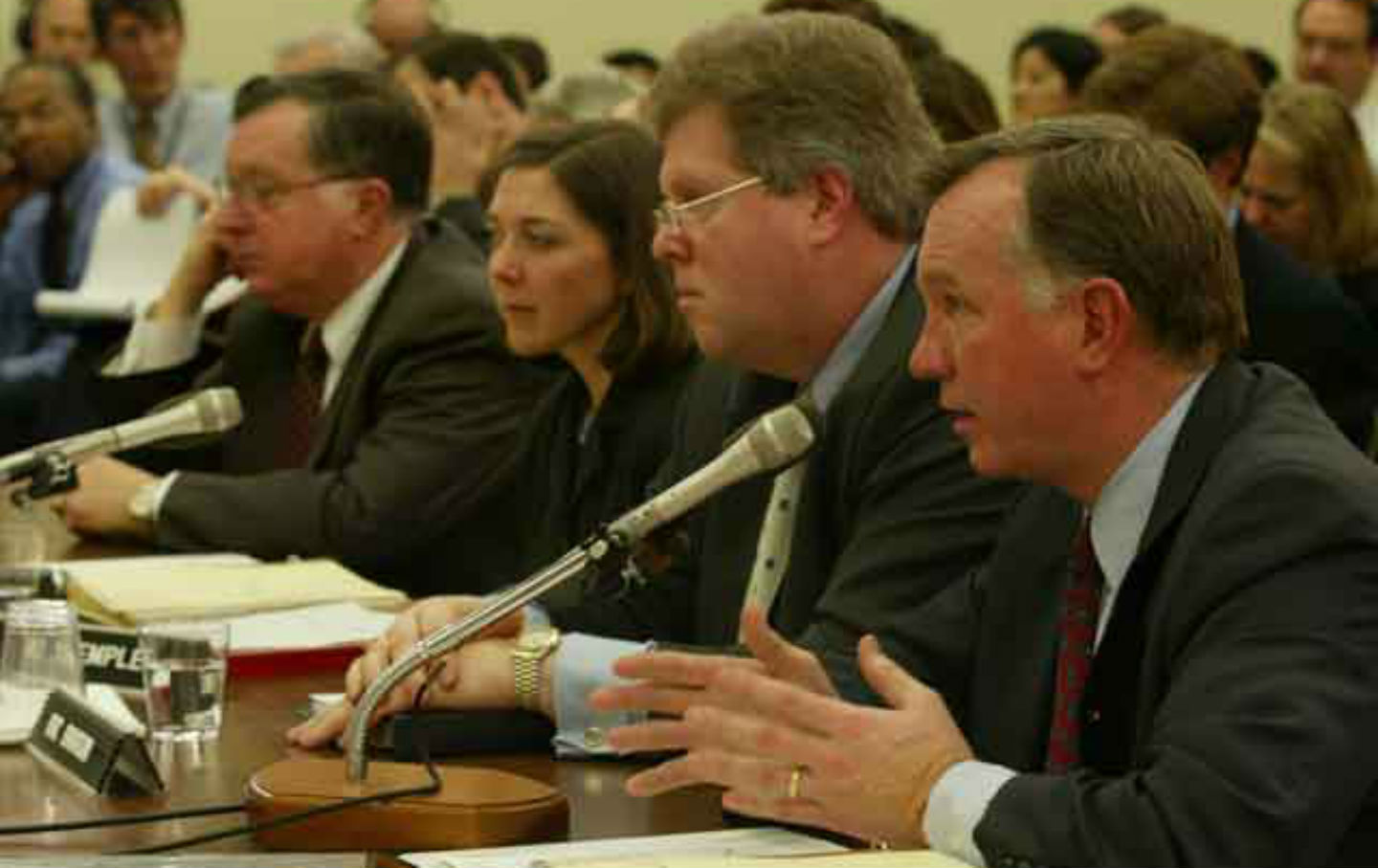 Arthur Andersen witnesses testify at the Subcommittee on Oversight and Investigations of the Committee on Energy and Commerce House of Representatives hearing on January 24, 2002 about Enron's bankruptcy filing and accounting practices. (Wikimedia Commons / US Government)

On this day in 2001 Enron declared bankruptcy, after several months of tanking stock prices, investigations into pervasive accounting fraud, and a failed attempt to find a buyer for the company. Writing in the Nation of December 24 that year, William Greider put the collapse of the company in a broader economic context.

The rise and fall of Enron is an instant classic in the annals of capitalism because, in one calamitous stroke, it wipes out so many sanctified illusions that rule in the magic marketplace. Enron embodies Nobel-class hubris like that of the market sophisticates who brought Long-Term Capital Management to ruin in 1998. It also smells of the raw monopolistic greed common a century ago. An energy-trading company that Wall Street had valued at $80 billion ten months ago is now a penny stock. Meanwhile, California consumers and businesses are stuck with the ruinously inflated electricity prices that Enron rode to brief financial glory. The firm’s gullible creditors include some of the best gilt-edged names in American banking—J.P. Morgan Chase, Citigroup—whose ancestral houses were big players during the first Gilded Age too. Unfortunately, then and now, these venerable financial institutions lured millions of innocents to the slaughter, unwitting shareholders who bought the exuberant promises.

In this case, the lambs include Enron’s own employees (thousands of whom are abruptly out of work) because top management cleverly prohibited their 401(k) accounts from selling Enron’s plummeting stock while the big boys were dumping theirs. If the financial losses to banks are severe enough—we don’t yet know the full truth—then US taxpayers may be burned too, their money used once again to rescue delinquent financiers from their just deserts in the name of “saving the system.” Nobody ever said capitalism was pretty.

Markets are imperfectible human artifacts and always subject to gross error, not to mention high-stakes fraud, because the transactions are always the work of human beings. Computerization and esoteric mathematical formulations do not change that humble fact; neither does the Internet. This same lesson was learned from great pain and loss in the early twentieth century and led eventually to the political understanding that markets without governors and regulators will repeatedly throw off disastrous consequences—extreme price swings, occasional busts and clever larcenies—so stabilizing rules and limits were imposed. That knowledge was pushed aside by the modern era’s deregulation….

It would be comforting to think this event will turn politics around and put a little spine in our legislators. Certainly many state governments have learned from California’s pain. But don’t count on Washington. Even after Enron’s meltdown, leading Democrats continue to shill for more deregulation, aware that their money patrons will be most upset if they reopen fundamental scrutiny of how wealth is created in the magic market. Elite opinion leaders will probably stick with the laissez-faire dogma, as it continues to fall apart, until the bloody losses lap over their shoes too.