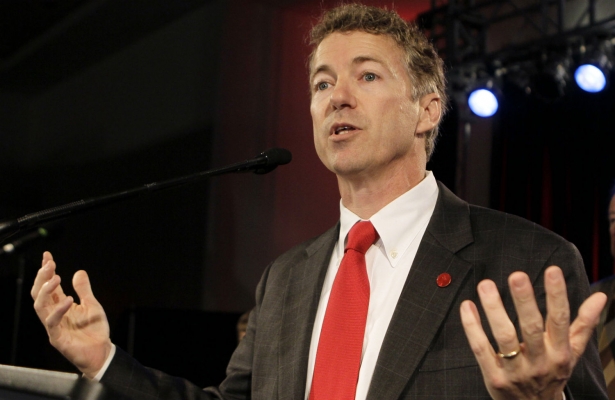 Last August, after the Supreme Court struck down a key provision of the Voting Rights Act, Rand Paul argued: “I don’t think there is objective evidence that we’re precluding African-Americans from voting any longer.” (For a comprehensive rebuttal, read Andrew Cohen’s “Here’s Where Rand Paul Can Find ‘Objective Evidence’ of Voter Suppression.”)

Nine months later, Paul is saying of voter ID laws,: “It’s wrong for Republicans to go too crazy on this issue because it’s offending people.” He’s conceded that Republicans have “over-emphasized” the prevalence of voter fraud and has called cutting early voting hours “a mistake.” He’s working with Eric Holder and lobbying in his home state of Kentucky to restore voting rights to nonviolent ex-felons. This from a guy who ran for office as a darling of the Tea Party and suggested that the Civil Rights Act of 1964 was unconstitutional.

Paul’s new religion on voting rights is evidence of a broader shift on the issue. In recent weeks, courts in Wisconsin and Arkansas have struck down voter ID laws and Pennsylvania Governor Tom Corbett decided not to appeal a Commonwealth Court decision in January overturning his state’s voter ID law. Extensive rulings in Wisconsin and Pennsylvania have strongly undercut the case for voter ID laws, showing that hundreds of thousands of registered voters lack the specific forms of newly required government-issued ID, that these voters are disproportionately black and Hispanic and lower-income, that obtaining such ID can be a Kafkaesque bureaucratic nightmare, and that there is no evidence of voter impersonation to justify such burdens. As Judge Lynn Adelman wrote in Wisconsin, “It is absolutely clear that [voter ID] will prevent more legitimate votes from being cast than fraudulent votes.” (A two-year investigation into voter fraud in Iowa found zero cases of voter impersonation at the polls.)

In 2008, the Supreme Court upheld Indiana’s voter ID law in a 6-3 decision authored by Justice John Paul Stevens, one of the most liberal Justices on the Court. Even though Indiana presented no evidence of in-person voter impersonation to support the law, Stevens wrote that the state’s “interest in protecting the integrity and reliability of the electoral process” justified whatever burdens would result from strict voter ID. But in 2013, Stevens told The Wall Street Journal that he is not “a fan of voter ID” and that “the impact of the statute is much more serious” on poor, minority, disabled and elderly voters than he believed in 2008.

Judge Richard Posner, who also upheld Indiana’s voter ID law on the Court of Appeals for the Seventh Circuit, has also changed his tune on the issue, calling voter ID “a type of law now widely regarded as a means of voter suppression rather than of fraud prevention.” Voter ID laws and related voting restrictions are increasingly being rejected in the courts, by politicians and among the public.

As I wrote recently, many Republicans used to strongly support voting rights and played instrumental roles in the enactment of the Voting Rights Act and its four reauthorizations. That changed dramatically following Barack Obama’s election, when GOP-backed voting restrictions sprung up all across the map. Maybe now the pendulum is swinging back to expanding the franchise. It will be a welcome sign when Paul isn’t the only major Republican to criticize his party for making it harder for people to vote.

“Senator Paul was having a larger discussion about criminal justice reform and restoration of voting rights, two issues he has been speaking about around the country and pushing for in state and federal legislation.

In the course of that discussion, he reiterated a point he has made before that while there may be some instances of voter fraud, it should not be a defining issue of the Republican Party, as it is an issue that is perhaps perceived in a way it is not intended. At no point did Senator Paul come out against voter ID laws. In terms of the specifics of voter ID laws, Senator Paul believes it's up to each state to decide that type of issue.”

UPDATE II: On Tuesday, May 13, Paul "clarified" his views on voter ID in interviews with Fox News hosts Sean Hannity and Greta Van Susteren, making clear that he supports voter ID laws but believes that Republicans should "emphasize" other issues. Read Steve Benen of Maddowblog for more.