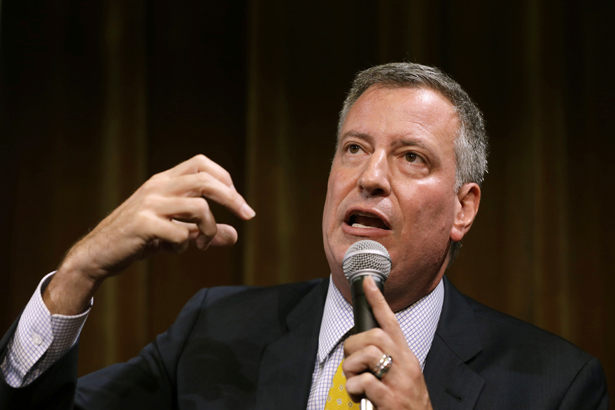 Here it is fourteen days into the Bill de Blasio mayoralty, and we’re still talking about a tax plan that was supposedly “dead on arrival” even before the Democratic primary back in September.

Yesterday in Albany, the Assembly Speaker Sheldon Silver said, “Thanks to the momentum generated by Mayor Bill de Blasio, we will take the universal pre-K program that we originally proposed, bolster it, expand it so that every 4-year-old in this state can benefit from early education and make it sustainable.”

The program Silver referred to is the signature policy proposal from de Blasio’s campaign, the provision universal early childhood education and middle-grade after-school services paid for by a tax on high earners. The reference to sustainability is a nod to de Blasio’s insistence that the program be paid for by the high-earner tax, and not some other budget carve-out that could disappear in subsequent years.

Last week, Bronx State Senator Jeff Klein—who serves as co-leader of the upper house as part of a power-sharing deal between a breakaway group of Democrats and the Republican caucus—said he also supports the tax plan.

There are times on a trip when, even if you haven’t reached your destination, it’s instructive to look at how far you’ve come.

Back in August, even before the primary candidates had held an official, televised debate, the Daily News endorsed Christine Quinn, saying of de Blasio:

Additionally, his call for raising taxes on the wealthy to drum up hundreds of millions of dollars annually to pay for pre-K education sells well but hasn’t a chance at a time when the next mayor will have to fight like hell just to preserve the status quo for New Yorkers.

Mr. de Blasio’s most ambitious plans—like a powerful new state-city partnership to make forever-failing city hospitals financially viable, or to pay for universal prekindergarten and after-school programs through a new tax on the richest New Yorkers—need support in the State Capitol, and look like legislative long shots. Once a Mayor de Blasio saw his boldest ideas smashed on the rocks of Albany, then what?

De Blasio’s opponents picked up this theme. In their final pre-primary debate, Quinn said de Blasio’s tax plan was “dead on arrival” at the State Capitol, labeling it “pie in the sky.” After de Blasio overturned all the handicapping and won the primary on the first round, Governor Cuomo sat with the Daily News editorial board and, according to the News, “virtually shot down the possibility next year that the state would take up a de Blasio plan to hike the city tax rate.” Cuomo’s re-election hopes and/or designs on the presidency, the thinking went, made it all but impossible for him to consider a tax hike. Soon, de Blasio’s Republican opponent, Joe Lhota, took up the line of argument that Quinn tried, calling the plan “dead on arrival” in a debate with the Democrat. Through it all, de Blasio refused to consider a “plan B” or “negotiate against [himself].”

That seemed like rhetoric at the time. It doesn’t now.

Last week, de Blasio convened union leaders in support of the pre-K plan at the same time as Cuomo held an event to tout a $2 billion package of tax cuts. Some saw this as the two men taking one step closer toward a real groin-kickin’, gravel-in-the-eyes-throwin’, beer-bottle-on-the-bar-breakin’ street fight over the mayor’s tax plan (which, you have to admit, would make for compelling drama, given their political history together and the fact that de Blasio’s lengthy reach versus Cuomo’s more powerful build create an interesting match-up).

Maybe that fight will still come to occur, but it was interesting that Cuomo’s package of tax cuts addressed property taxes, businesses taxes, estate taxes and so on, but not the personal income tax, which is what the de Blasio plan would affect. By my unsophisticated math, if de Blasio’s plan—which requires some $500 million a year in new revenue—goes through and Cuomo gets his other cuts, he can still claim to have cut $1.5 billion in taxes. And hey, it’s not like a future Cuomo presidential campaign is ever going to be able to claim that he transformed New York State into a low-tax environment—just that he lessened the overall bite.

What’s more, Cuomo’s recent tax proposals were clearly aimed more at upstate, where the economy is worse and Cuomo needs more votes if he is going to accomplish his perceived goal of trying to eclipse his father’s widest electoral margin. If Cuomo needs anything from downstate in order to achieve a stunning re-election landslide, it’s Democratic turnout, and that’s where those unions who’ve jumped on the de Blasio UPK bandwagon come in.

But it’s valuable to note that the conventional wisdom, which so often narrows the parameters of political debate, appears to have underestimated the mayor, the legislature or both. If everybody had listened to the editorial boards, or the governor or Quinn or Lhota, and written off de Blasio’s plan and de Blasio, we wouldn’t be here. If de Blasio’s first big idea doesn’t get smashed on the rocks of Albany, what then?