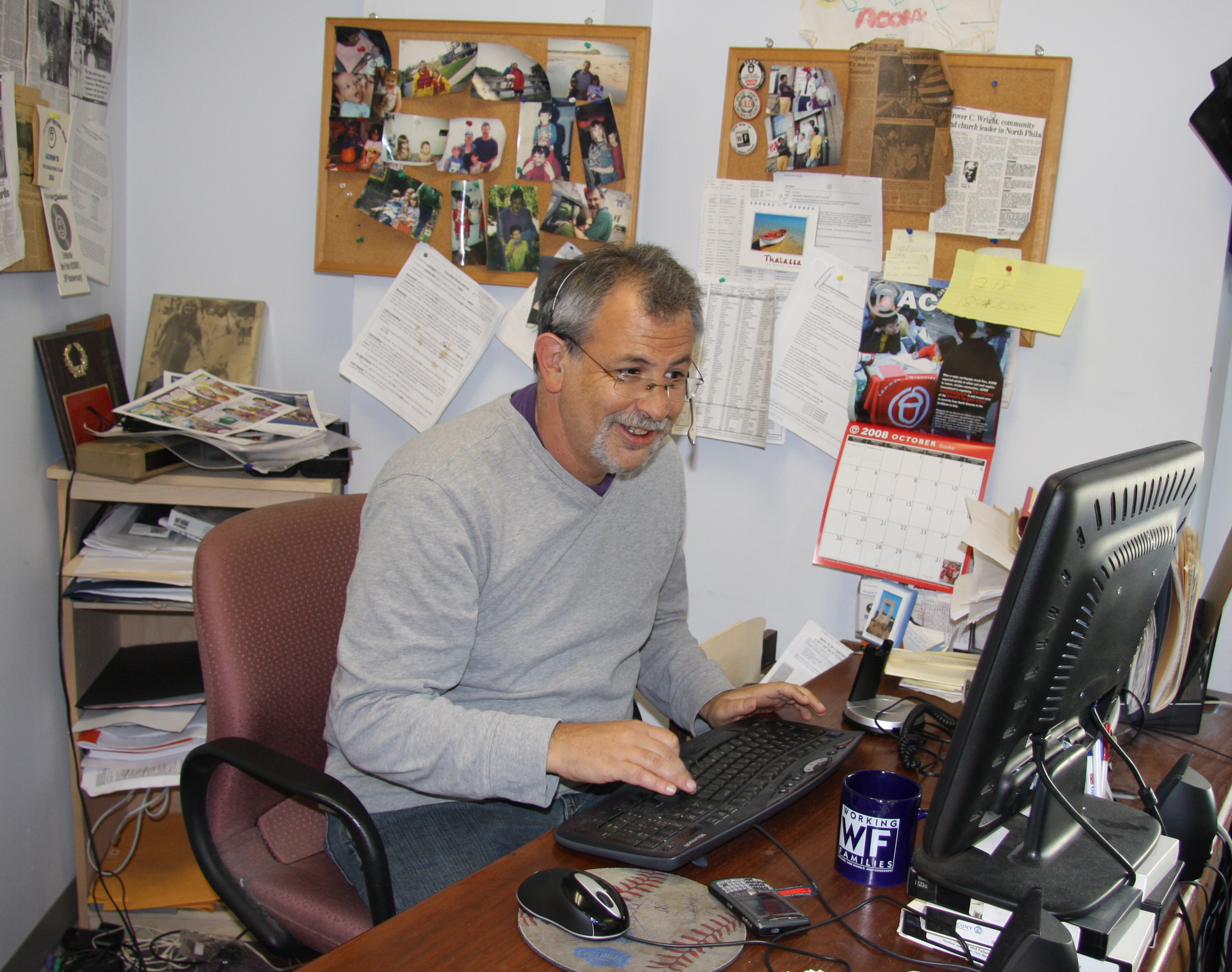 Photo courtesy of Bonnie Friedman, from the book "Seeds of Change" by John Atlas.

Thousands of Bill de Blasio’s grassroots supporters—as well as the small inner circle of advisers who helped catapult him into office and will help guide the newly elected mayor as he tackles the challenge of governing the nation’s largest city—were at the Park Slope Armory in Brooklyn on election night to celebrate this momentous progressive triumph. But one important face was missing. Jon Kest played a key role in building the progressive grassroots movement that became the foundation of de Blasio’s political base and would have been a major player in his stunning landslide victory. But Kest, who died last December 5, didn’t live to see the most impressive achievement of his decades of activism.

For almost three decades, Kest was the most effective organizer in New York City. He helped found ACORN, the Working Families Party (WFP) and New York Communities for Change (NYCC)—three key components of New York’s progressive movement. But Kest’s genius was not only in building effective grassroots organizations but also in forging coalitions with unions, faith-based groups, neighborhood associations and environmentalists so that the groups were more powerful than the sum of their parts. He was a linchpin of some of the most critical political battles in the city that mobilized low-income residents against the corporate and political establishment.

De Blasio’s victory, along with WFP leader Leticia James’ triumph as the city’s public advocate, was decades in the making. Neither would have been won without the seeds planted by Kest and his coalition allies working together to reshape New York’s politics.

Kest was mostly a behind-the-scenes organizer, little known to the general public. He was the hidden architect of winning campaigns, monitoring from the back of the room. Most liberal politicians and activists knew him and admired his talents, even if they didn’t always agree with his sometimes confrontational tactics. He was highly respected by community, labor, and political activists who valued his strategic savvy and organizing talent. De Blasio was one of many activists and budding politicians who drew on Kest’s advice and support.

Kest, who grew up in White Plains, New York, met his wife, Fran Streich, at the University of Pennsylvania. As a student majoring in occupational therapy, Streich led a campaign to stop the university from shutting down the School of Allied Medical Professions, and recruited Kest to the battle. They lost that fight, but the struggle forged their commitment to grassroots organizing.

Immediately after graduating from Penn in 1977, they founded the Philadelphia chapter of ACORN. ACORN would grow to become the country’s largest community organizing group, known for improving inner-city neighborhoods and helping to lead nationwide fights to increase the minimum wage, end predatory lending and register millions of low- and middle-income voters. While building the Philadelphia chapter, they devised a national “squatting” campaign that led to the enactment of the National Homesteading Act, which allowed low- and moderate-income families to purchase abandoned buildings owned by the federal Department of Housing and Urban Development.

The couple moved to New York in 1982 to start an ACORN chapter in Wall Street’s backyard. In the 1980s, East New York and Brownsville faced a tidal wave of abandonment and arson, leaving families homeless and neighborhoods devastated. Kest and his wife organized a squatting campaign, which pushed then-Mayor Ed Koch to turn over a group of abandoned buildings to ACORN to run as low-income housing co-operatives. The campaign continued under Mayors David Dinkins and Rudolph Giuliani. By the end of Giuliani’s second term, 1,000 low-income New Yorkers lived in homes owned or managed by ACORN’s Mutual Housing Association of New York.

After organizing parents frustrated with the city’s public schools, Kest led a campaign to create ACORN’s High School for Social Justice to offer students a comprehensive academic program while they participate in grassroots campaigns to improve conditions for the city’s poor. In 2001 Kest, Fran and Bertha Lewis, whom Kest recruited to become NY ACORN’s executive director and who became a major figure in local politics, built a coalition with the United Federation of Teachers (UFT) to thwart Giuliani’s efforts to privatize New York’s public schools. The momentous UFT-ACORN alliance finally put to rest the ghost of tensions between teachers and community residents that exploded in Ocean Hill-Brownsville in the 1960s. They demonstrated that it was possible for teachers and low-income parents to work together to improve public schools.

A few years later, building on that alliance, Jon and Fran worked with the UFT to organize a campaign to unionize thousands of family childcare providers.

Kest organized grassroots campaigns to get the city to adopt a living wage and to push developers to provide affordable housing as the price of building in the city. He also organized the Housing Here and Now coalition that pushed Mayor Michael Bloomberg to support a $130 million Housing Trust fund to create and preserve 4,500 units over four years.

Many activists who emerged from the 1960s and 70s movements shunned mainstream politics, distrusted politicians, and disdained the compromises needed to move radical ideas onto the public agenda. But Kest was a genius at playing the “inside/outside” game.

Kest was equally at home organizing a civil disobedience protest or running a get-out-the-vote election day operation. He was a cornerstone of campaigns to elect Melissa Mark-Viverito, James Sanders, Jumaane Williams, Debi Rose and Julissa Ferreras to the City Council, Hakeem Jeffries and Kevin Parker to the state legislature and John Liu as comptroller. He ran the field operation for Mark Green’s successful campaign for the Democratic nomination for mayor in 2001. And, of course, he was a key player in de Blasio’s campaigns for City Council and Public Advocate before he ran for mayor.

Kest helped build national ACORN into the largest anti-poverty organization in the country, with chapters in thirty-eight states and 400, 000 members. His New York chapter grew from 3,000 members in 1982 to 35,000 members in 2006. During that period its staff increased from four to fifty people, and its annual budget expanded from under $50,000 to over $3.5 million. In 2010 ACORN as a national group was destroyed, partly by internal tensions over leadership, management issues and strategy, but mostly because of a ferocious and deceitful attack by the Republican Party and the right-wing media, aided and abetted by the media and many of ACORN’s liberal allies who, instead of supporting the group, ran for the hills.

Although devastated by ACORN’s demise, Kest did not give up his fight for social justice. Building on ACORN’s strengths and learning from its mistakes, he immediately organized New York Communities for Change. The group has focused on issues like wages, housing, mandatory sick pay and education. By 2012, NYCC had a budget of close to $6 million and a staff of eighty organizers.

One of Kest’s major strengths was as a talent scout. He was always on the lookout for grassroots leaders, researchers and organizers. His antennae were particularly attuned to finding activists who had the personal skills, outrage against injustice and patience to become politicians. So when, working with former Mayor David Dinkins in 1989, he first met a young Bill de Blasio, he sensed that the tall, likable radical was a likely candidate for public office.

Even before Kest played a central role in de Blasio’s first City Council race in 2001, he was urging progressive activists to view him as a potential mayoral candidate. Over the years he became de Blasio’s close friend and adviser. They worked as an inside/outside tag team fighting for the working poor, around issues such as an increase in the minimum wage. After de Blasio was elected public advocate in 2010, they worked closely to halt planned public school closings and forced city housing officials to restore Section 8 subsidies to 2,600 poor families.

In 2012, despite suffering from a fierce cancer, Kest helped to initiate the current protest movement of fast-food workers that is now sweeping the country. On November 29, hundreds of workers in restaurants including McDonald’s, Burger King and Wendy’s took part what The New York Times described as “the biggest wave of job actions in the history of America’s fast-food industry.”

The de Blasio victory is one of Kest’s most important feats. De Blasio faces enormous obstacles—including the city’s persistent fiscal problems—as he shifts into governing mode. Had Kest lived, he would surely be advising de Blasio that he’ll be a much more successful progressive mayor if the city’s low- and moderate-income residents continue to protest the predatory practices of banks, developers and landlords and to keep the heat on elected officials—perhaps even de Blasio—to make sure that the voices of ordinary families are heard in the corridors of power. Fortunately, there are tens of thousands of New Yorkers who have learned to mobilize and organize thanks to Kest’s work.