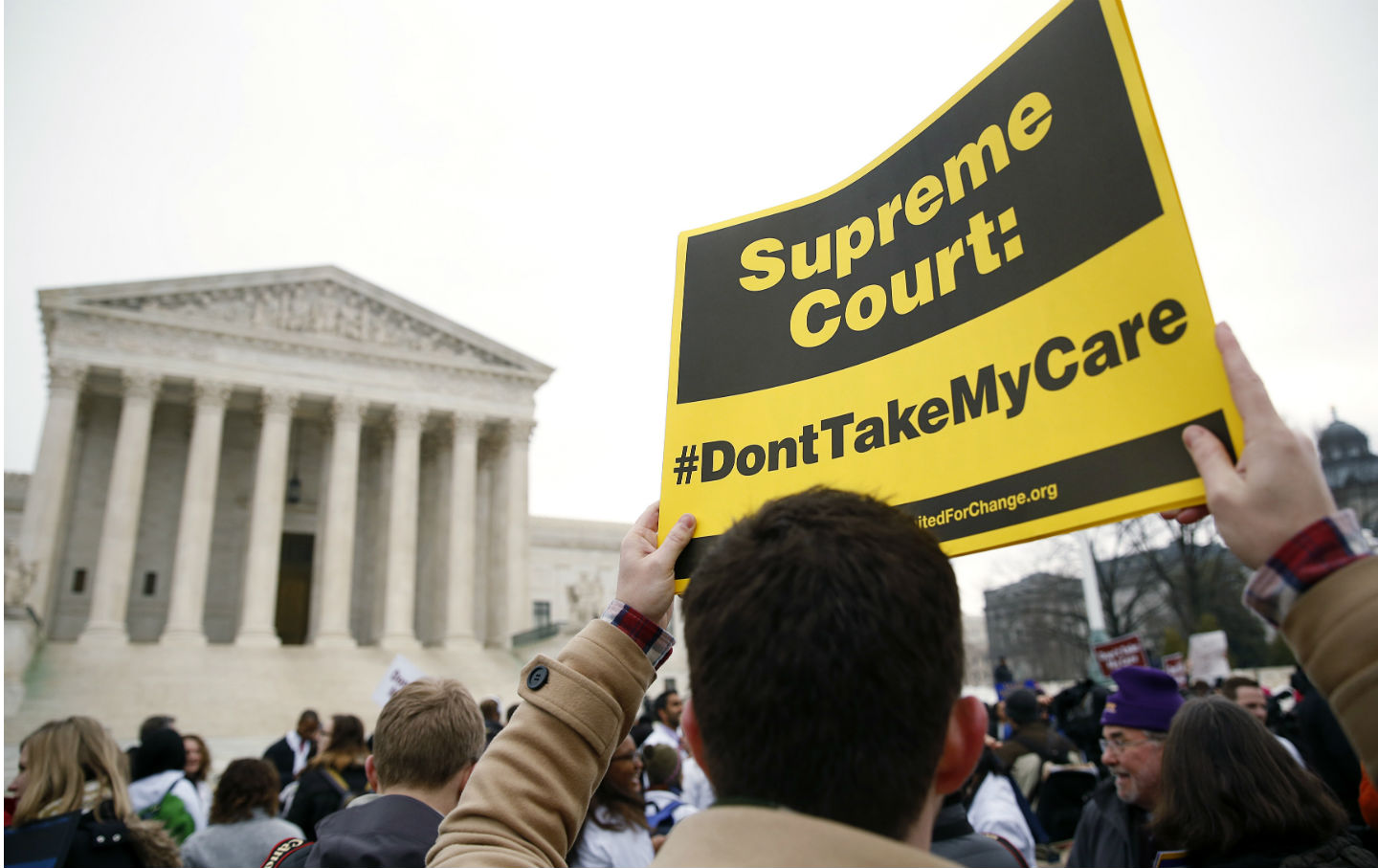 A demonstrator in favor of the Affordable Care Act walks with a sign in front of the Supreme Court in Washington on March 4, 2015. (Reuters/Gary Cameron)

When the Supreme Court heard arguments in King v. Burwell on Wednesday, it was forced to consider whether just a few words in the Affordable Care Act—“exchange established by the state”—meant that people living in states with federal exchanges shouldn’t be receiving any subsidies to buy health insurance.

If the justices ultimately don’t think the language is clear either way, they could still invoke what’s known as the Chevron deference to uphold Obamacare in its current form. In 1984, Chevron v. Natural Resources Defense Council established a precedent that courts should defer to relevant agencies if a legislative text does not make intent obvious, so long as the agency’s interpretation is based on a “permissible construction of a statute.”

In this case, applying Chevron deference would mean ruling the Affordable Care Act text isn’t clear on who should get subsidies—something the government vigorously argues is wrong, and that it is clear—but also ruling that the IRS could permissibly read the ACA in a way that allows subsidies and tax credits for people who live in states with a federal exchange. Everything would go ahead as normal.

This is not a purely theoretical outcome. It’s actually what the US Court of Appeals for the Fourth Circuit ruled in King v. Burwell before it reached the Supreme Court. (That court found that the government had only a “slightly” stronger position about the meaning of the contested phrase and that the law is “ambiguous,” but that the IRS should be allowed to proceed with nationwide subsidies.) Justice Anthony Kennedy brought up the Chevron deference during arguments Wednesday, though he appeared reluctant to apply it.

So you might see the potential problem here: if the Court does apply this logic to its final ruling, couldn’t President Ted Cruz come into office and direct the IRS to interpret the ACA in the opposite fashion—and thus strip subsidies away from millions of Americans, thereby sending the dread Obamacare into a death spiral? This might be an attractive option for him, since he could do it unilaterally without any cooperation needed from Congress.

The short answer is: yes. But there are legal and political realities that would likely prevent that from ever happening.

Verrilli essentially conceded it could, but immediately pointed to the legal problem. Remember, the agency (in this case the IRS) can only base its interpretation on a “permissible construction” of the ACA, and Verilli argued that this hypothetical Republican administration “would need a very strong case” to change the IRS’s interpretation, especially given the hugely disruptive effects that would follow.

If President Cruz went ahead anyway, another long legal challenge would probably result, except with the roles reversed: there would be another challenge to the government’s interpretation of “exchange established by the state,” but it would be brought by progressive defenders of the health care law on behalf of people who lost subsidies for health insurance. Another messy, protracted legal fight would follow, while people in many states struggled to pay for health insurance in the meantime.

But political realities might prevent this from ever happening in the first place. The genius of the conservative challenge in King v. Burwell is that if it succeeds, Republican politicians have some level of plausible deniability for all the chaos and loss of coverage that would follow. Republicans would basically argue “Hey, it’s not our fault. The authors of Obamacare wrote an unclear law and the Supreme Court tossed part of it.”

Also, in a courtroom, it’s a little easier to make a theoretical, legal argument that the intent of the lawmakers who wrote the ACA is both unclear and immaterial. But President Cruz would have to make a much more direct case in the public square: he would have to argue that he truly thinks the ACA wasn’t meant to provide any subsidies to people in states with a federal exchange, and then with the stroke of a pen effectively strip heath coverage from millions of people—and own the damage all to himself.

It’s exceedingly unlikely that even the most determined foe of Obamacare would do this. The political fallout would be far too extreme, and the move might lose on a court challenge anyhow.

So if the Court does uphold the ACA under a Chevron deference, proponents of the law can probably rest easy—but they could never be quite sure King v. Burwell was the final word.