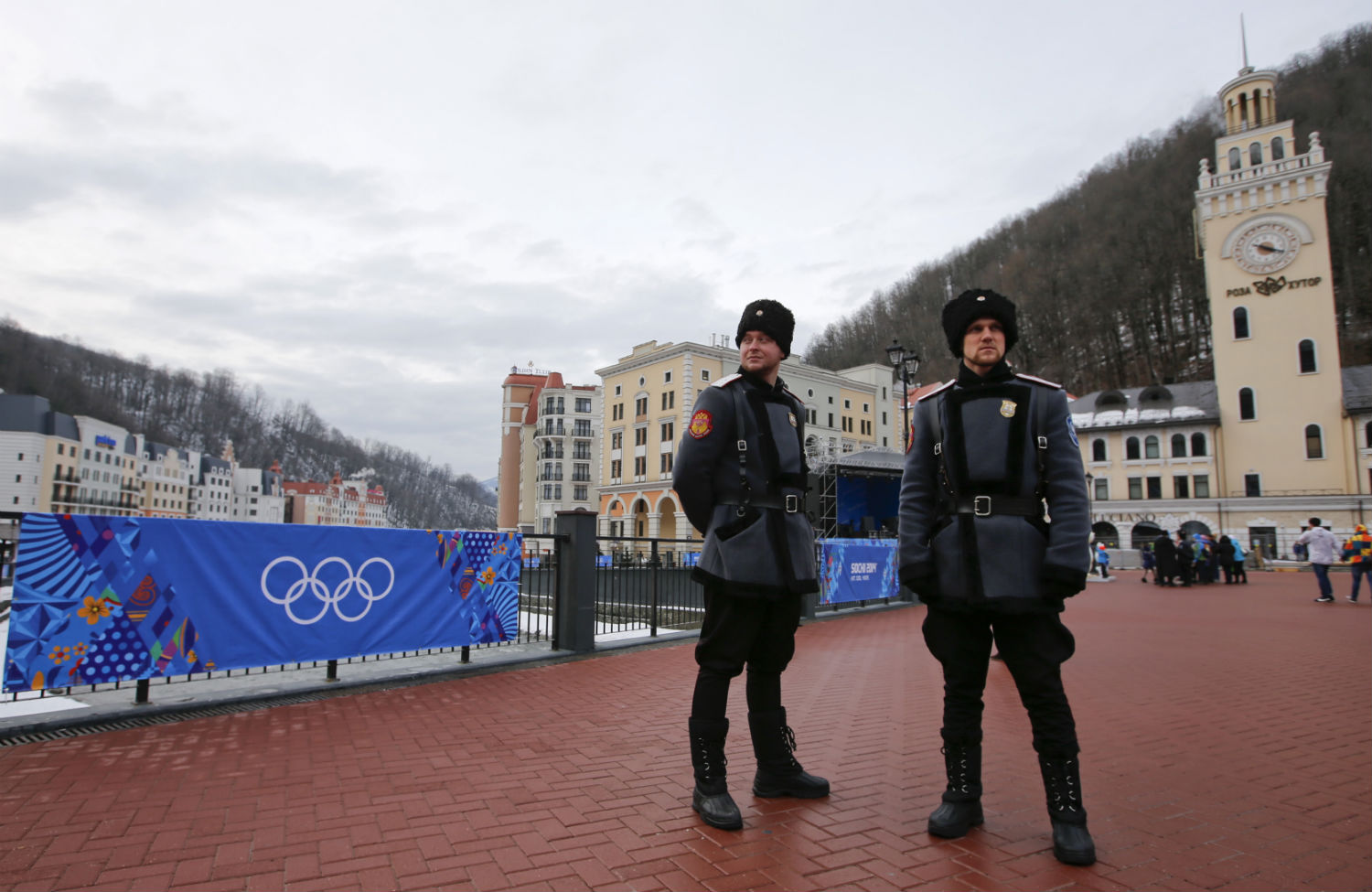 Of the 500 Cossacks patrolling Olympic Sochi, only one could talk to me. As I waited for two hours at the temporary quarters of these throwback warriors for Valery Vasilievich, deputy head of the Kuban Cossack Host, to arrive, I started chatting with a young Cossack named Oleg, who had traded his sheepskin hat and wool uniform for a polo shirt and short shorts on his day off. As he poked at his iPad, we talked about the cost of iPhones, the upcoming Canada-America hockey match and Oleg’s émigré brother and aunt’s love for the United States. Oleg said he had left his sword and traumatic pistol at home in Krasnodar, the regional capital—no need to scare the tourists. In short, he was just a normal 20-year-old kid playing soldier here in Sochi.

When I asked him what he thought about his brother in arms who gassed and beat Pussy Riot activists with a traditional Cossack whip yesterday, he said he hadn’t given it much thought.

“I support him as a fellow Cossack,” he said finally.

Once upon a time, Cossacks were the most feared horsemen in the czar’s army, members of a military caste that lived and died in the lawless borderlands of the Russian empire. But the contingent of Kuban Cossacks serving in Sochi are just modern Russians who happened to be born white and Orthodox Christian in the Krasnodar region, the traditional Cossack heartland. Thanks to this legacy—and the political expediency of all things “traditional” in Russia now—they’ve been able to claim a privileged status in local law enforcement, allowed to detain people until police arrive and conduct anti-immigrant raids. But while they may have the power, they don’t have the liability that comes with it, as the Pussy Riot whipping showed.

The Krasnodar region, which includes Sochi, is the center of the Cossack revival: Governor Alexander Tkachyov, who is himself a Cossack colonel, became the first to institutionalize Cossacks last year when he placed some 1,200 Cossacks on the state payroll.

The Cossacks have enjoyed the patronage of the federal government thanks to their ability to promote patriotism and traditional values, a main plank of Vladimir Putin’s foreign and domestic policy. Meanwhile, regional leaders like Tkachyov can employ Cossack groups as a loyal alternative to the police, which are controlled by the Interior Ministry in Moscow, according to New York University professor Mark Galeotti, an expert on Russia’s security services. And local citizens—at least the ethnic Russians—generally like Cossacks and credit them improving law and order.

But the professionalism of the Cossack hosts springing up around Russia had been called into question even before the Pussy Riot whipping. The independent newspaper Novaya Gazeta reported that Cossacks broke one man’s nose in Krasnodar in 2013 when he noted that they had no right to check his documents, and a local Cossack leader also punched a female electoral official in the nose that year. No one was prosecuted in either instance.

Meanwhile, Cossacks have continued the xenophobic streak of their forebears who led czarist pogroms against Jews, according to many historians. The Kuban Cossacks said they took part in mass anti-immigrant raids in Sochi this fall that resulted in the deportation of hundreds of immigrant workers who built the Olympic venues. Many of these workers were then held in inhumane conditions and not paid the wages they were owed, according to Human Rights Watch and local activists.

In fact, the regional news service Caucasian Knot reported that 270 Cossacks in the Krasnodar region serve in special “mobile brigades” that conduct raids to find undocumented immigrants. According to Oleg, these nighttime adventures are sanctioned by special documents from the prosecutor general’s office and involve bands of Cossacks rounding up immigrants and carting those without documents off in a van to face deportation proceedings.

Asked if modern-day Cossacks—many of whom actually do have minimal military experience—could be somehow reformed into an effective crime-fighting force, Galeotti said the first thing to do would be “to make it clear that Cossacks should not be regarded as having special privileges or rights.”

“With the beating of Pussy Riot, if it had been security guards who had used truncheons it would be regarded as a crime,” he said.

Even conservative pundit Maxim Shevchenko, who condemned Pussy Riot’s “punk prayer” in Christ the Savior Cathedral in 2012, said their Cossack attackers had “shamed Russia and the Olympics” and called for them to face criminal charges. Instead, the one with the whip received an administrative violation and paid a fine, and he’s still on the Cossack payroll.

Valery Vasilievich, when he finally arrived, said he had commended his whip-happy subordinate on a job well done.

“We’ve driven and will continue to drive these girls out of here with a dirty broom,” he said of Pussy Riot, whom he accused of defiling Orthodoxy’s main church and being American agents.

Maybe with better training and reforms to the ill-defined legal area that leaves room for vigilante justice and anti-immigrant raids, these men in sheepskin hats could serve some minor security function. But for now, they’re just playing at soldiers, whipping girls and inflaming ethnic tensions on a whim.