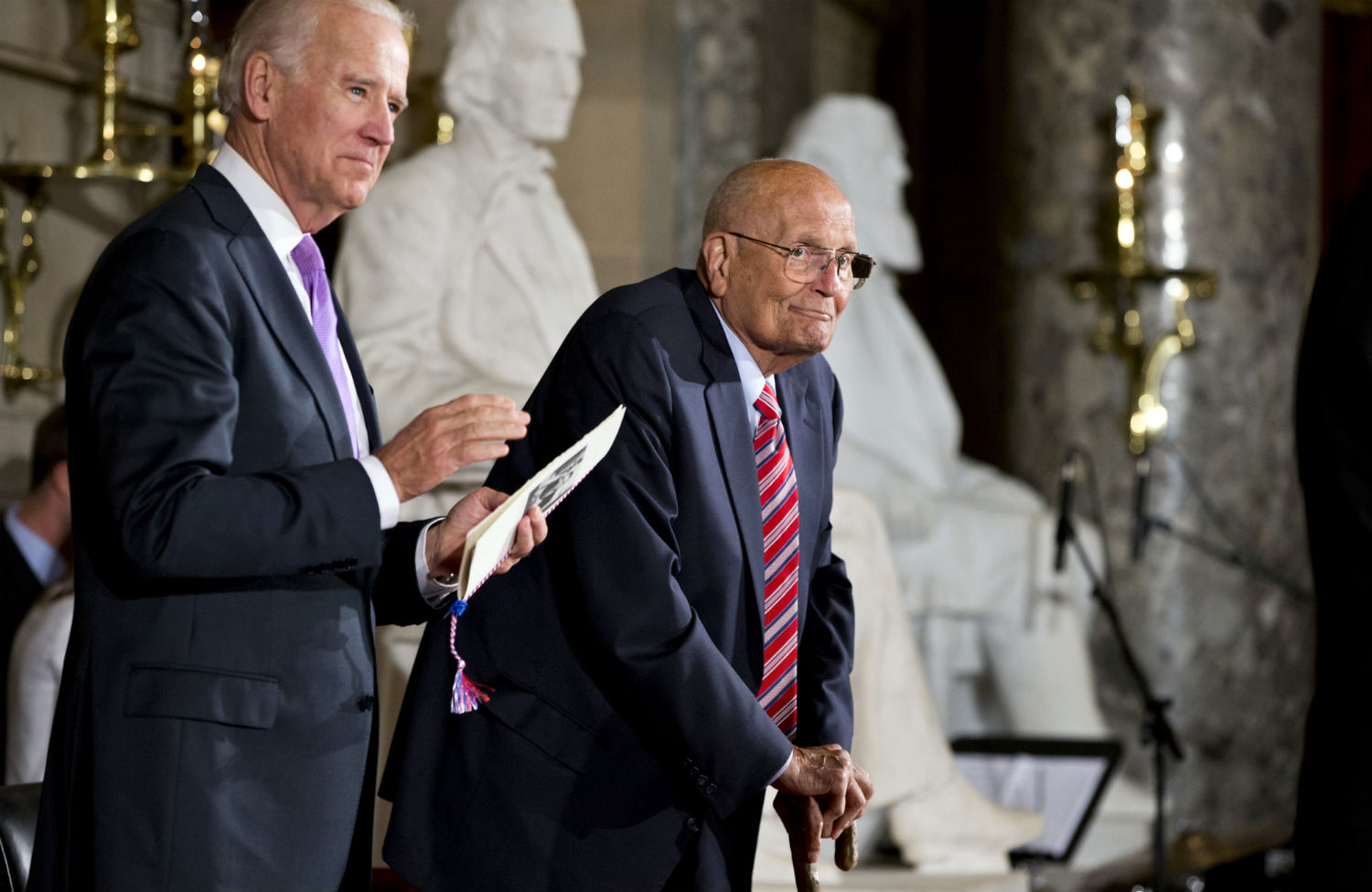 When John Dingell was a child, he met Franklin Delano Roosevelt, who dreamed eighty years ago that a groundbreaking Social Security proposal might feature a publicly funded national healthcare program.

Under pressure from the American Medical Association, FDR and his congressional allies scaled back the Social Security proposal.

But the Dingell family kept the dream alive.

In 1943, Dingell’s father, a congressman from Michigan who had played a critical role in enacting the initial Social Security Act of 1935, joined a pair of New Deal stalwarts from the Senate—New York Senator Robert Wagner and Montana Senator James Murray—to propose the rough outline for a single-payer national healthcare system.

There was a powerful sense that the Dingell-Murray-Wagner bill would frame the underpinnings for that initiative. Its sponsors traveled the country promising to “not give up until the fight is won.”

After Roosevelt died at the beginning of his fourth term in 1945, Harry Truman pressed the issue—only to be blocked by the combination of Republican obstruction, red-baiting and an expensive campaign of opposition.

But John Dingell Sr. kept introducing his national healthcare proposal through the rest of the 1940s and into the 1950s. And after John Dingell Jr. took his late father’s House seat in 1955, he continued to introduce it as “The United States National Health Insurance Act.”

Much will be made, with the news that John Dingell Jr. will retire from the House at the close of his twenty-ninth full term, of the congressman’s remarkable tenure—elected during President Dwight Eisenhower’s first term, he will leave as the longest-serving member in the history of Congress. As Michigan political veteran Steve Mitchell noted, “With the exception of John Quincy Adams, there’s no one with a longer participation in the affairs of the United States than John Dingell.”

Surely, something will be made of the fact that the dean of the House of Representatives says that serving in the chamber has become “obnoxious…because of the acrimony and bitterness,” in Congress. And of his fierce condemnation of congressional backbiting and obstruction: “The American people could get better government out of monkey island in the local zoo.”

There will, among those who know his record, be recognition that Dingell is leaving as an epic champion of organized labor who opposed flawed trade deals—even when they were sponsored by Democratic presidents. Of his determined opposition, as the guardian of the New Deal, Fair Deal and Great Society legacies, to any move to privatize Social Security and Medicare. Of his courageous leadership in fights for the Civil Rights and Voting Rights Acts and—as the representative of one of the largest Arab-American communities in the United States—of comprehensive and humane immigration reform. And of his prescient votes against the Iraq War and the Patriot Act.

There will be some mention of his history of opposing gun control measures and of his occasional clashes, as the representative from an auto-making district, with environmentalists—as well as his key role in shaping the Clean Air, Clean Water and Endangered Species acts. And there should be note of his determined advocacy, as a key committee chairman and exceptionally engaged legislator, for scientific research and safe food and drug laws.

But Dingell’s great legacy remains his advocacy for the healthcare reforms that FDR imagined and his father proposed. He presided over the House vote that approved Medicare in 1965 and was so instrumental in crafting the Affordable Care Act that when a critic asked if he had read the bill, Dingell reportedly replied, “Read it? I wrote it.”

The measure as it was finally enacted—after months of negotiation and compromise—was different from what Dingell initially proposed, and from the single-payer approach long championed by the congressman and his father. But, like many veteran advocates for healthcare reform, Dingell saw the ACA as a vital step—one that moved the country closer to the vision of universal healthcare he had advanced across six decades.

Even as he referred to the ACA as “the first truly transformative piece of social reform legislation in the twenty-first century,” Dingell admitted that it did not contain “as much [control on insurance firms] as I think we ultimately are going to need.”

But he did not hesitate to declare, with the passage of the ACA, that “healthcare is no longer a privilege, it is now a right.”

The struggle to guarantee that right continues. Savvy activists, with unions such as National Nurses United and organizations such as Physicians for a National Health Program and Progressive Democrats of America, argue that it will not be fully realized until the United States adopts a “Medicare for All” approach that operates on a single-payer model.

With the retirement of John Dingell, the House will lose its longest-serving champion of fundamental, and fundamentally humane, healthcare reform. As the wrangling over the ACA and other measures continues, it is valuable to recognize the long arc of history that the Dingells bent toward reform. John Dingell Sr., speaking in 1946, decried “a deadly barrage of baseless propaganda” against his initial proposal. But he reminded Americans then, just as his son did across the ensuing decades, that healthcare must not be the privilege of a wealthy few. It must be the right of all Americans.

Watch Next: Katrina vanden Heuvel speaks about this important month for Obamacare.