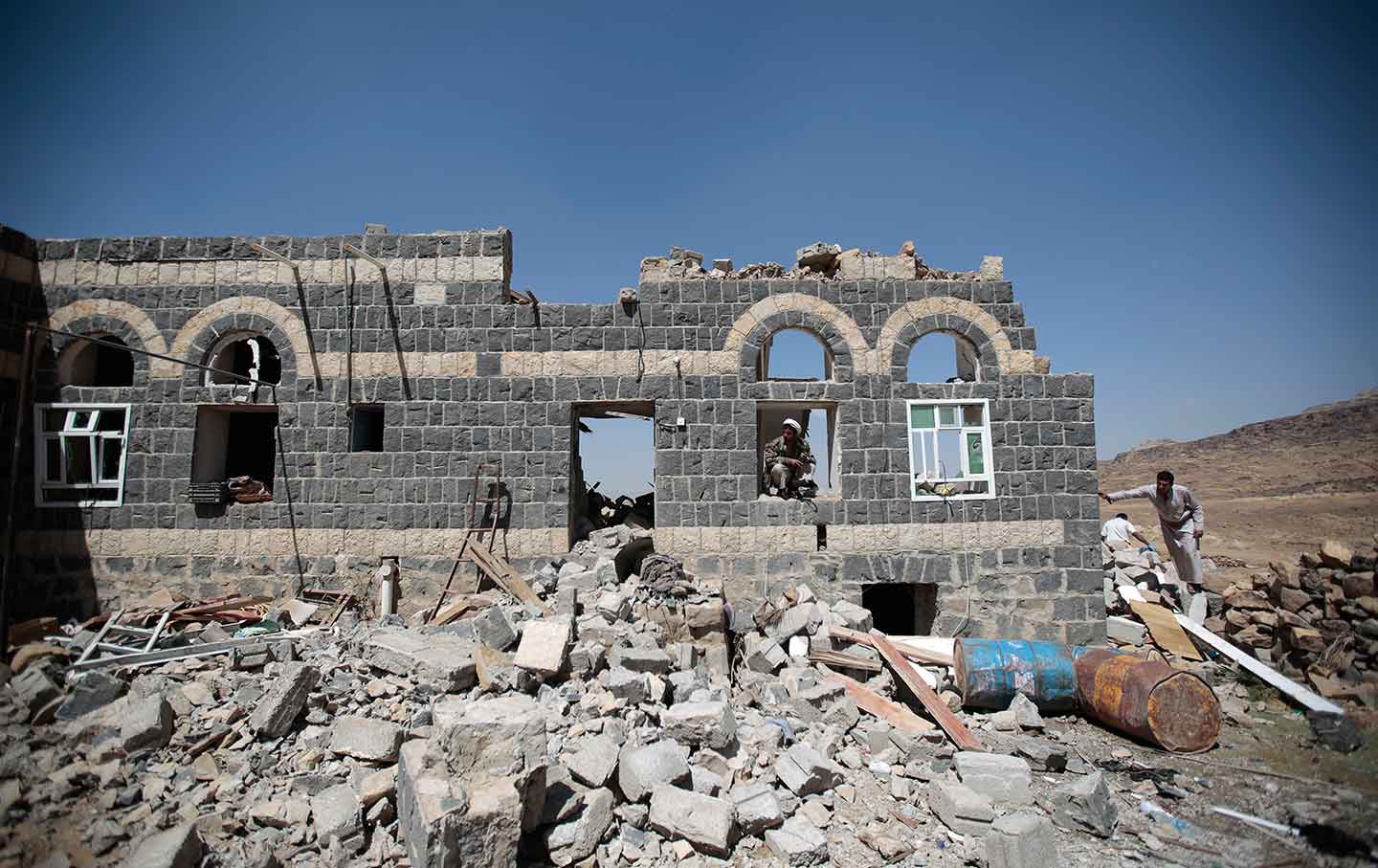 The aftermath of an airstrike on the outskirts of Sanaa, Yemen, February 2017. (AP Photo / Hani Mohammed)

Yemen, one the poorest and most neglected countries in the world, is experiencing what UNICEF identifies as “one of the world’s largest humanitarian crises.” It is estimated that a million malnourished children are at risk from cholera. The country is on the verge of widespread famine, and 20.7 million people (73 percent of Yemen’s population) are in need of humanitarian assistance.

What can be done to ease the disaster that Yemen is experiencing?

Lake is blunt. He says that “this, our generation, is scarred by the irresponsibility of governments and others to allow these things to be happening.”

One of the irresponsible governments that has involved itself in the Yemen conflict—via its military alliance with Saudi Arabia and the United Arab Emirates—is that of the United States.

The United States continues to provide massive support for Saudi Arabia’s brutal military campaign in Yemen. The group Just Foreign Policy observes that “unauthorized and unconstitutional U.S. participation in the Saudi war in Yemen…has created the largest humanitarian crisis in the world, pushing millions of human beings to the brink of famine.”

“Without US participation,” argues Just Foreign Policy, “the Saudi-UAE war in Yemen would not be possible.”

Members of Congress are taking steps to end that US participation.

Declaring that “we aim to restore Congress as the constitutionally mandated branch of government that may declare war and retain oversight over it,” Democratic Congressmen Ro Khanna of California and Mark Pocan of Wisconsin are proposing to end US targeting and refueling assistance for Saudi and UAE warplanes that are bombing Houthi forces that are backed by Iran.

By taking the side of the Saudis and their allies in what has become a proxy war between the Saudis and the Iranians, the United States has not brought stability to the region, nor has it increased prospects for peace. It has only helped to turn a horrible circumstance into a nightmare.

Congress, says Pocan, should end US involvement in a “senseless, unauthorized conflict.”

Khanna, a member of the House Armed Services Committee, says, “I think this can begin a major shift in foreign policy, tilting away from support for Saudi Arabia and a greater restraint in foreign intervention.”

This privileged resolution will force members of Congress to go on record, many for the first time, on the question of whether or not we should be backing a coalition that’s demonstrated an intractable disregard for human rights and the most basic laws of war. To vote for continuing U.S. support is to vote for more indiscriminate bombings of schools, marketplaces, and hospitals in one of the world’s poorest nations, and at the expense of American taxpayers and U.S. national security interests. This is another push for Congress to take back its constitutional authority to declare war, that for political expediency it has handed over to the President.

Among the House members who are prepared to go on the record are a pair of Republicans who have long been concerned about the failure of Congress to provide adequate oversight regarding US engagement on undeclared wars—Thomas Massie of Kentucky and Walter Jones of North Carolina.

Their attempt to get members of Congress to embrace their constitutionally defined duty to make decisions about whether the United States should involve itself in wars around the world could still face hurdles. House Speaker Paul Ryan (R-WI) has gone out of his way to block congressional action that might check and balance the Trump administration’s militarism. But the Khanna-Pocan-Massie-Jones initiative seeks to go around Ryan and force a vote. If they succeed, this opens up the possibility that a Congress that has been derelict in its duty might actually get on the right side of history—and play a real role in addressing one of the world’s largest humanitarian crises.