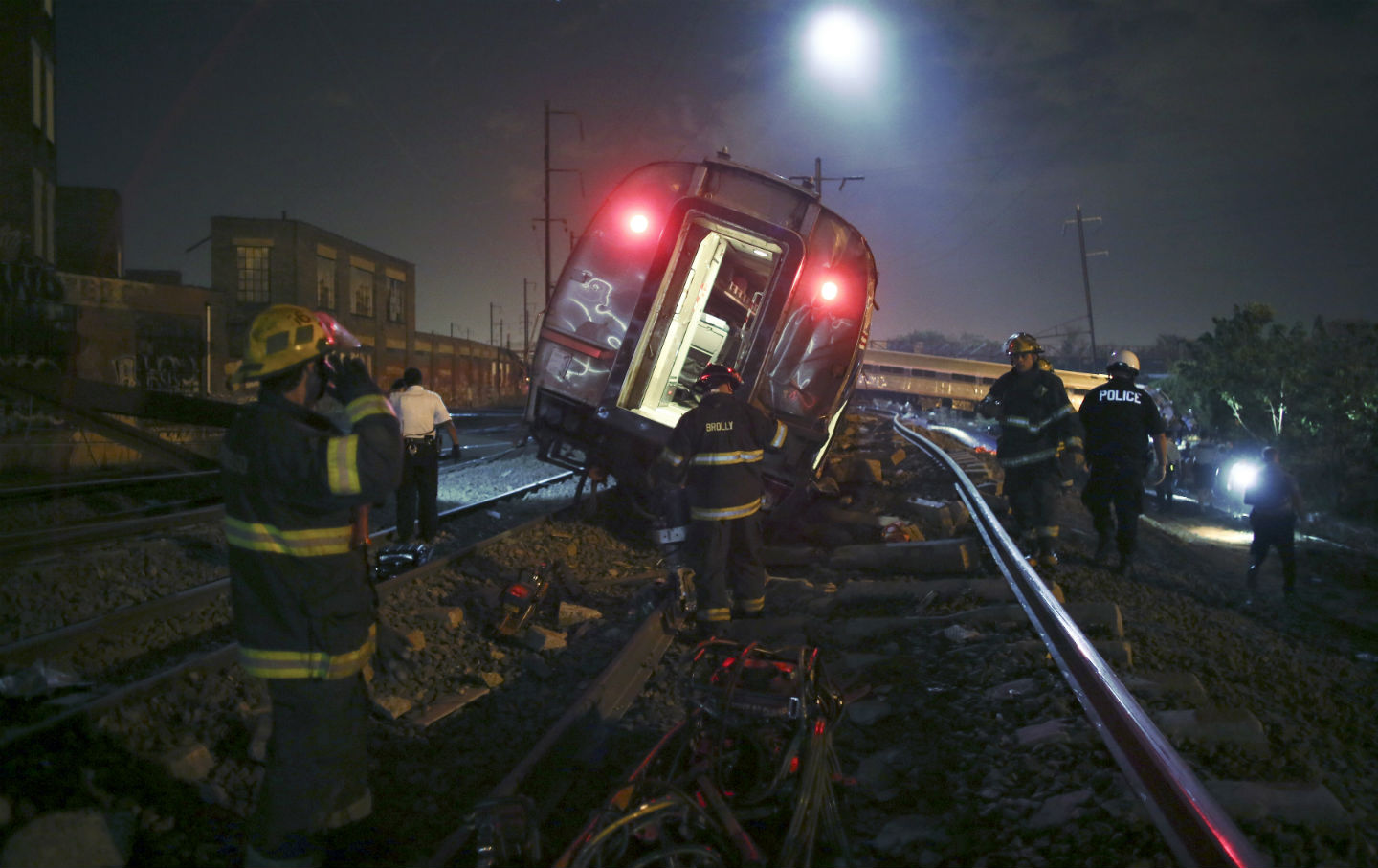 America’s “high-speed” rail lines are slow compared with those of the countries with which the United States chooses to compare itself. The schedules are unsteady. And, as the horrific crash of an Amtrak train in Philadelphia Tuesday night illustrated, safety concerns are on the rise.

The Federal Railroad Administration’s Office of Safety Analysis has seen a steady rise in Amtrak derailments in recent years. According to a Washington Post review of the data, “there were two in 2012, three in 2013, six in 2014…”

In the first two months of 2015, however, there were at least nine derailments. But it is the latest Amtrak Northeast Corridor derailment, with at least seven dead and roughly 200 hurt, that is renewing talk about how this country’s rail system is in serious need of repair.

The first priority is to mourn for the dead and to care for the injured in a regional tragedy that has national implications. But even amid the initial news reports, there was constant referencing of what Donald Trump was quick to decry as America’s “horrible infrastructure problems.” The Obama White House agreed, with spokesman Josh Earnest saying Wednesday morning, “There is clearly more that can be done when we’re talking about a railway infrastructure that is decades-old.”

The cause of the crash is still being investigated. There are reports that the train was traveling too fast for a turn it had to make—raising issues of human error, safety protocols, unaddressed dangers, and the role that smart infrastructure investment might have played in making the route smoother and safer. The most telling headline in this regard appeared in Friday morning’s New York Times: “Technology That Could Have Prevented Amtrak Derailment Was Absent.” The fact is that train crashes happen for a lot of reasons, some of which are difficult to control against. But there is no question that the role played by outdated and decaying infrastructure can be addressed by the federal government. Nor is there much question that one of the best ways to assure that human errors do not lead to disasters is by keeping equipment, track and systems up to date. Unfortunately, as a Bloomberg Business report explained Wednesday morning, “There’s a lack of political will.”

Connecticut Senator Chris Murphy, a key Democrat working on transportation issues in the Senate said Wednesday that “even before last night it was clear that there’s more we can do as a nation to make rail travel safer and more reliable. Millions of Americans rely on rail to travel up and down the Northeast Corridor each year, and yet Congress refuses to make the investments needed to maintain and expand rail lines and safety features.”

The Philadelphia derailment, which occurred in the middle of national Infrastructure Week, highlights mounting concerns about infrastructure decay. “The Northeast Corridor, which runs between Boston and Washington, is one of the railroad’s busiest and most profitable lines,” reported The New York Times in its main story on the crash. “But officials have long complained that the agency needs more subsidies from Congress to improve the railroad’s deteriorating infrastructure and replace aging equipment.”

Bloomberg’s Wednesday morning report asked: “Did Old Infrastructure Contribute to Amtrak Derailment?” Answer: “It’s not just the trains, it’s the tracks.… they are getting old and they need a lot of maintenance.”

This is not a new concern. Officials in Washington have been regularly reminded in recent years of the problems plaguing America’s passenger rail system.

The answer had a lot to do with politics—especially the politics of those whose determination to cut federal spending is as ardent as it is impractical.

“Along with PBS and the United States Postal Service, Amtrak is perpetual fodder for libertarian think-tankers and Republican office-seekers on the prowl for government profligacy,” explained Simon van Zuylen-Wood. “Ronald Reagan and George W. Bush repeatedly tried to eliminate its subsidy, while Mitt Romney promised to do the same. Democrats, for their part, aren’t interested in slaying Amtrak, but mostly you get the sense they just feel bad for it.”

National Journal detailed the challenges facing Amtrak, as compared with the ever-improving rail systems of developed nations, and concluded that “those stats don’t figure to improve anytime soon. While Amtrak isn’t currently in danger of being killed, it also isn’t likely to do more than barely survive. Last month, the House of Representatives agreed to fund Amtrak for the next four years at a rate of $1.4 billion per year. Meanwhile, the Chinese government—fair comparison or not—will be spending $128 billion this year on rail.”

The House proposal for Amtrak reauthorization includes one change of consequence, and it looks good at first glance. The House measure would make it easier for the Northeast Corridor to reinvest in infrastructure improvements on its own lines rather than forcing it to subsidize improvements on less-profitable routes nationwide. But that’s not an appropriate response, as it attempts to solve one funding problem by creating another.

The Senate has not gotten around to acting on Amtrak reauthorization. The awful news from Philadelphia, involving a rail line many members of Congress and Washington insiders ride, is likely to bring action. But simple reauthorization is not the answer. The House measure is ill-conceived and insufficient.

Connecticut Senator Murphy has been arguing that “The existing (Northeast Corridor) needs upwards of $50 billion in investment over the next 20 years just to keep up with projected demand.”

That is just the beginning of the investment that is required for the renewal of rail—and the broader infrastructure of the United States.

Safety concerns can and should motivate investment. But so, too, should concerns for job creation and economic development.

New York Mayor Bill de Blasio has made the case for a broader commitment to infrastructure central to his advocacy for a progressive agenda.

Federal investment has not kept pace with this demand, resulting in an outdated, overburdened surface transportation system that is ill equipped to handle current, let alone future, need. Spending on infrastructure in the United States has sunk to 1.7 percent of gross domestic product, a 20-year low.

The Department of Transportation estimates that by 2030, it will cost $84 billion to $105 billion a year just to keep the highway, bridge and transit systems in good repair, and up to $170 billion a year to improve conditions and performance.

Meanwhile, the rest of the world races ahead. Europe spends 5 percent of G.D.P. on infrastructure, and China 9 percent. Global cities like London and Beijing are investing in transit and rail projects on a vast scale, while in New York City, more than 160 bridges were built over a century ago, and large portions of our subway’s signal system are more than 50 years old. Some of the subway cars we ride in were built before 1975.

This isn’t for want of local resources. Over the past decade, New York City has increased commitments to capital projects by 50 percent. But we could not do it all on the local level even if we wanted to.

That’s a wise assessment. And it ought to be taken seriously by a Congress that has neglected infrastructure for too long. The Laborers’s International Union of North America sums the problem up well when it says, “Our nation’s infrastructure is failing us and so is Congress by not fixing it.”