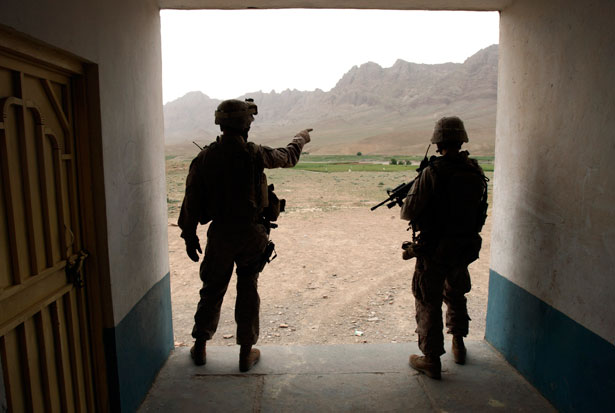 President Obama announced Tuesday afternoon that 9,800 American troops will remain in Afghanistan after 2014, a number that he said could be cut in half by the start of 2015. By the end of 2016, the last year of his presidency, Obama envisions a final end to America’s longest war.

The decision to drag out the war for two and half more years is an almost total surrender to many Pentagon officials who were pushing the president for around 10,000 troops to remain in the country; NBC News’s Jim Miklaszewski reported it was “exactly” what General Joseph Dunford, the top American commander in Afghanistan, had requested.

For months, reports had been leaking out of the White House about serious internal divisions about the war. Some senior advisors were pushing for no troops after 2014, and Vice President Joe Biden was reportedly pushing for a much smaller force of 2,000 to 3,000 troops. Biden and his allies apparently lost the debate.

But Obama still faces resistance to his desire for more war in Afghanistan—now, from Congress. The Nation has learned that there will be a push in the Senate to request a congressional vote on any troop presence in Afghanistan past 2014. It will come in the form of a proposed amendment to the National Defense Authorization Act (NDAA), which just cleared the Senate Armed Services Committee.

At least some members of the group are ready to give it one more run. A Senate aide close to the process told The Nation there would be a “strong push for an amendment vote” during the defense spending bill debate, which should begin before the end of the year. The February bill gained eight co-sponsors from both parties, including two senators in tough re-election battles: Merkley and Senator Mark Begich.

That effort is just one part of broadening congressional disapproval. “President Obama promised he would end the war in Afghanistan,” Representatives Keith Ellison and Raul Grijalva said Tuesday in a statement on behalf of the Congressional Progressive Caucus, made up of sixty House members. “We are glad the original combat mission in Afghanistan is coming to a close, but keeping a residual force of 9,800 in the country after 2014 is not ending the war.”

US troops will still be effectively engaging in war, by any definition, past 2014—which is no doubt undergirding the congressional concerns. Obama affirmed Tuesday that remaining troops would still be “supporting counterterrorism operations against the remnants of Al Qaeda,” which is broad enough to theoretically include just about any operation inside Afghanistan. Details of a draft Status of Forces Agreement with Afghanistan that were leaked last year showed the United States fought for, and apparently won, the right to continue entering the homes of Afghan citizens.

During the House debate on the NDAA, a measure to sunset the 2001 Authorization for Use of Military Force at the end of 2014 failed, but got more votes than it did in previous years. The finally tally was 233-191.

Representative John Garamendi, a co-sponsor of that effort, also voiced concern Tuesday about Obama’s new strategy. “While I always welcome news of service members returning home from Afghanistan, I remain deeply concerned about the scope and length of our continued military involvement in Afghanistan beyond 2014,” he said in a statement.

Senator Merkley, who helped spearhead the earlier Senate efforts, expressed similar skepticism. “After more than a dozen years in Afghanistan, I believe it is time to end the longest war in American history and bring our sons and daughters home,” he said. “If the administration wants to keep troops in Afghanistan beyond this year, Congress should vote. The American people deserve a voice in issues of war and peace. Automatic renewal is fine for Netflix and gym memberships, but it is not the right approach when it comes to war.”