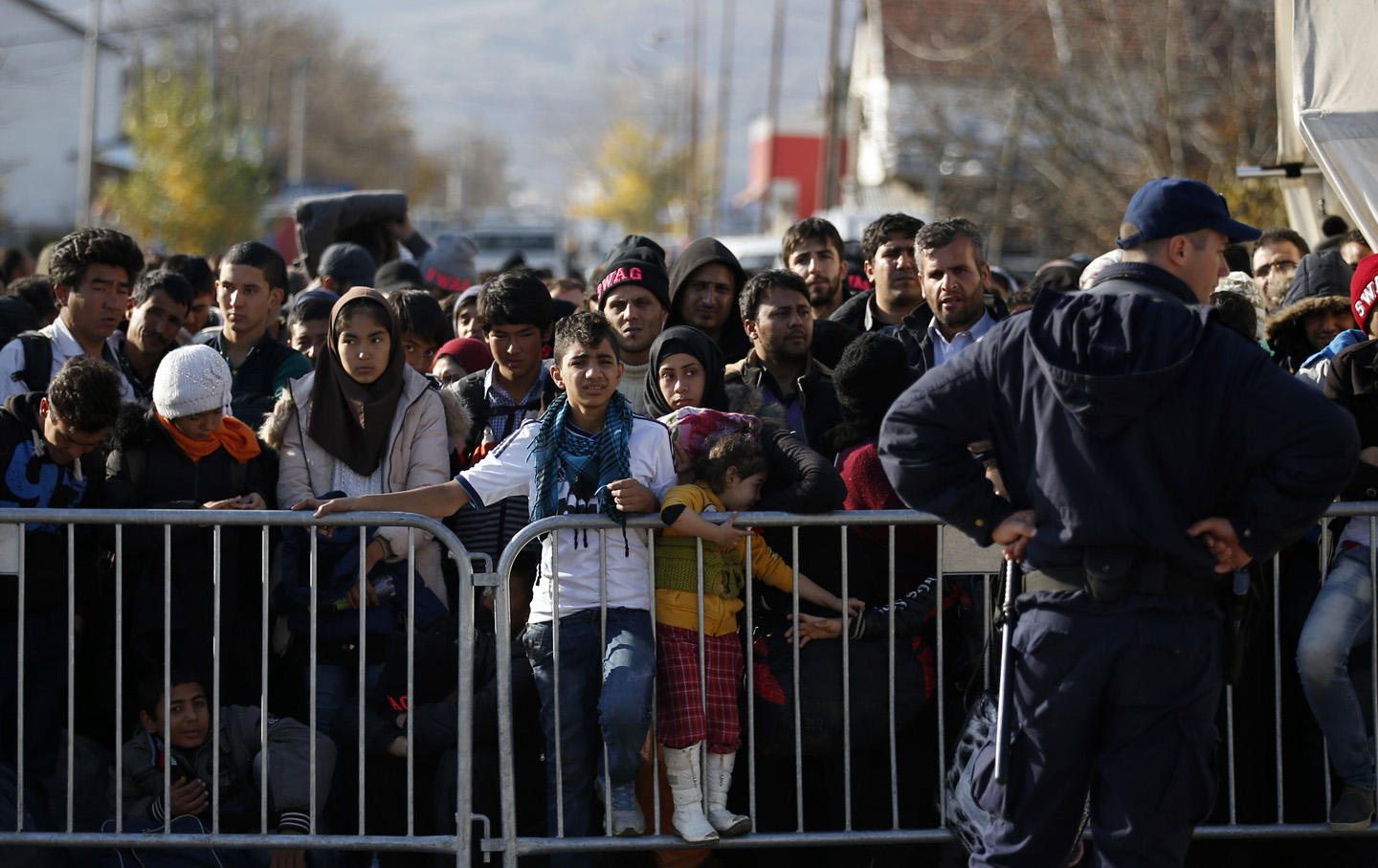 Migrants wait to register with the police at the refugee center in Presevo, Serbia. (AP Photo / Darko Vojinovic)

Earlier this afternoon the House passed HR 4038, a two-day-old bill calling for tougher restrictions for Iraqi and Syrian refugees who hope to enter the United States. The ostensible aim, according to the bill’s author, Representative Michael McCaul (R-TX), was to address the “gaping holes” in the country’s current management of its refugee program.

Never mind that none of the identified suspects in last Friday’s horrific Paris attacks were refugees, as was initially rumored. Put aside the fact that current US refugee policy prioritizes the most vulnerable: children, female-led households, victims of torture, and those requiring medical care. Never mind, too, that adding more lengthy checks to a processing time that currently averages two years can directly endanger people who are stranded in war zones. Remember, instead, that we’re living in a twisted political moment when the rules governing Republican political discourse seem to be remarkably simple: The more obscene the better, and there isn’t a blow too low when it comes to going after immigrants, refugees, and outsiders.

Thursday’s bill cleared the House with what GOP aides called a veto-proof majority, when accounting for the absences, TheHill.com reported. Three Republicans voted against the bill, and 47 Democrats broke with President Obama, who has vowed to veto it. The Senate will have to wait until December, after its Thanksgiving break, to take up the bill, which would require that the FBI and Department of Homeland Security certify that potential refugees are not a national security threat.

The swift anti-Muslim backlash that has followed the Paris attacks ought to have surprised no one; the gnarled anti-immigrant sentiment that runs underneath the building refugee panic is now a defining characteristic of US politics. There’s nothing new here—the targets have shifted, slightly, but the rhetoric and policy prescriptions are old and well practiced.

There was nothing new in Paul Ryan’s initial refusal—weeks before he assumed his new role as House speaker—to move on immigration reform so long as President Obama’s in office. And there’s nothing new about his abrupt pledge after the Paris attacks to call for more stringent security checks on potential refugees from Syria and Iraq. Refugees already face the most stringent background checks of anyone (including tourists, businesspeople, and students) hoping to enter the country through authorized channels, but unprecedented amounts of enforcement are not enough to declare our southern border “secure” to Republicans, either.

Meanwhile, Donald Trump said today he’s open to steps that even he admitted would’ve been “frankly unthinkable a year ago,” including a database to register Muslims in the country and special identification for Muslims that “noted their religion.” (Perhaps Trump forgets that Nazis already tried that one with Jews?) And Roanoke, Virginia, Mayor David Bowers, a Democrat, invoked the nation’s shameful internment of Japanese Americans during World War II in a request that city agencies stop offering aid to Syrian refugees. But again, there’s sadly nothing fresh about conservative politicians dehumanizing migrants, such as Ben Carson comparing Syrian refugees to dogs—“mad dogs,” that is.

Anti-Muslim and anti-immigrant policy-making and posturing are one and the same. And neither began with Paris, or ISIS, or even September 11. The folks who are calling to shut down mosques today have been pledging to keep US doors shut to Syrian refugees for months—and to round up and deport all the nation’s unauthorized Mexican immigrants while they’re at it.