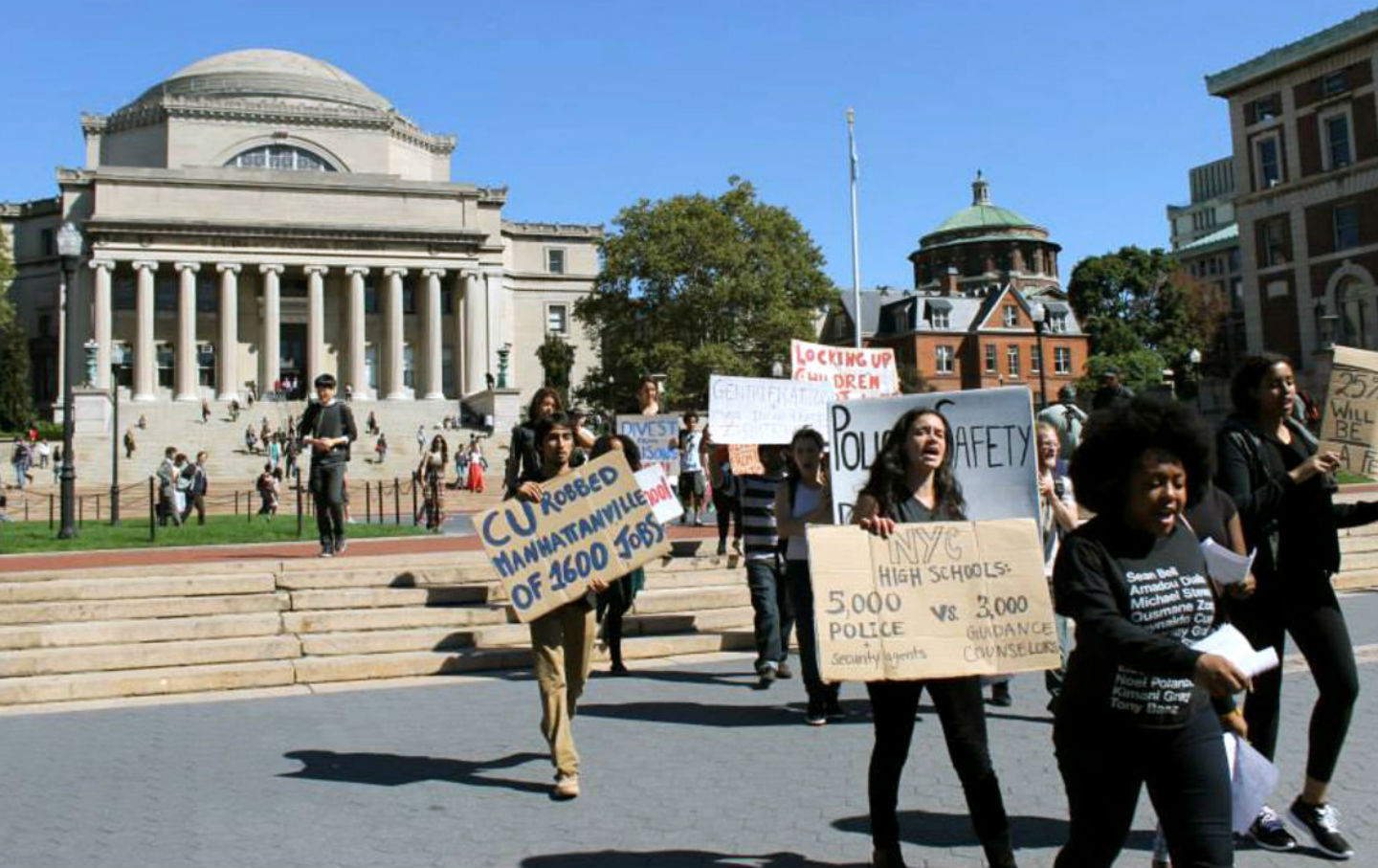 Editor’s note: This story was reported by Clare Sestanovich for the Marshall Project, a nonprofit news organization focused on the US criminal justice system. You can sign-up for their newsletter, or follow the Marshall Project on Facebook or Twitter.

In the late 1970s, on college campuses across the country, students banded together to demand that universities align their wallets with their consciences: They called for schools to divest from companies with ties to South Africa, to translate moral opposition to apartheid into tangible economic policy. Now, four decades after Columbia’s Coalition for a Free South Africa blockaded the steps of a university building, another divestment movement is trying to tackle what could become this generation’s signature cause: criminal-justice reform.

Columbia is one of several schools where students are demanding that university endowments take a visible stand against mass incarceration by divesting from private prison companies, which have faced criticism—and lawsuits—for rampant abuse and a lack of transparency.

Back in 1985, Columbia agreed to student demands. Within months of the first blockade, the board of trustees voted to divest, joining endowments from coast to coast, from Harvard to University of California campuses. In retrospect, some skeptics have called the effect of divestment on South Africa’s economy into question. The impact on American universities, however, is clear. Divestment petitions became a go-to tool in the arsenal of student activists, representing a range of political causes. In recent years, robust movements calling for divestment from Israel and fossil fuels have demanded attention from university administrations. The University of California student council even lobbied to divest from entire nations, including the United States, with poor human-rights track records.

In February 2014, Columbia Prison Divest launched their campaign with a letter to university president Lee Bollinger—which they read aloud to his secretary when they found him away from his desk. According to the group, the university had $8 million invested in Corrections Corporation of America, the country’s largest private prison company, as well as shares in other behemoths of the private security industry, the GEO Group and G4S. They called for immediate divestment from the groups and a pledge not to reinvest in the future.

Since 2013, five University of California schools have passed resolutions in their student senates calling for divestment, and have published a guide “to getting UC money out of the prison industrial complex,” for use by other campuses interested in replicating their efforts. Their work has been coordinated in part through the work of Enlace, an alliance of community organizers who have made “driving a wedge between investors and the private prison industry” their priority in recent years.

The Dream Defenders, a civil-rights group that formed in the wake of Trayvon Martin’s shooting (and was invited to meet with President Obama last December), has coordinated divestment efforts in Florida. They swooped onto the scene in February 2013 when Florida Atlantic University announced the school’s new football stadium would be funded by, and named after, one of the country’s largest private prison companies, The GEO Group. The stadium deal quickly received national attention—and even inspired a segment on The Colbert Report. In April, FAU had canceled the contract with GEO. Within another month, the university president resigned.

At Columbia, divestment advocates struggled to get their campaign off the ground after that first petition outside President Bollinger’s office. They wrote several more letters, but didn’t receive any formal response from the administration. In November, they staged what one of the group’s leaders, Dunni Oduyemi, called an “intervention,” accosting the president on his way to teach a class until he promised to meet with CPD in person. The group was impressed with Bollinger’s receptiveness—Oduyemi says he has “continued to express interest in using Columbia, its legacy, its prestige, to address racial inequality”—but the decision to divest isn’t up to him: According to Colombia’ protocol, requests must first be approved by a finance subcommittee, and then by the Board of Trustees.

In 2000, Columbia created the Advisory Committee on Socially Responsible Investing, a body composed of students, faculty and alumni, which is charged with evaluating any petitions for changes in investment strategy. Calls for divestment are assessed according to strict criteria, which requires “broad consensus within the University” on the issue and stipulates that divestment should be shown to be “more viable and appropriate” than any other possible policy response.

Navigating Columbia’s bureaucracy, Oduyemi says, has been slow. “As a campaign, we recognize that one of Columbia’s strategies in dealing with divestment is to delay the process as much as possible,” she says. Another member of Columbia Prison Divest called meetings with the advisory committee “wrought with confusion, misunderstanding, and miscommunication.”

Members of the Advisory Board weren’t available for comment, but a university spokesperson said by e-mail that Columbia “has a strong set of procedures around ACSRI that include research, discussions and public meetings, which are thorough and deliberative (and thus take time).” The university doesn’t comment on investment strategy except in its annual report.

Meanwhile, CPD has been facing other logistical challenges. School commitments constantly vie for students’ attention, and graduation throws leadership into upheaval every year.

These challenges are large enough that many schools have opted not to follow Columbia’s lead. Eva Shang, a student at Harvard and the head of Student Alliance for Prison Reform, an umbrella group that coordinates activism on multiple campuses, says that there’s real risk in taking on “extended campaigns that rely on student investment.” She has focused her time and energy on more service-oriented work, like bringing tutoring or theater programs into prisons. As a leader setting campus agenda, she has to ask herself: “Is attention best diverted to other efforts that benefit the broader community and achieve something tangible?”

Some university administrators have voiced more forceful criticism. Christine Wood, a trustee at Vassar, told University Business that even when divestment campaigns achieve success, they don’t actually make change: “an investor with proxy votes that influence corporate decision-making, is more powerful in advancing corporate sustainability than stepping outside the sphere of influence by divesting.”

When rejecting a bid from Harvard students to divest from fossil fuels, University President Drew Gilpin Faust said maintaining a robust endowment should take precedence over making politicized statements. “We should, moreover, be very wary of steps intended to instrumentalize our endowment in ways that would appear to position the University as a political actor rather than an academic institution,” she wrote in a statement.

Shang says she has watched several private prison divestment campaigns struggle to gain traction and thinks there is greater enthusiasm for other avenues of mobilizing on criminal-justice issues, like a push to curb the use of solitary confinement, which she says “everyone is so on board and gung-ho about.”

But back at Columbia, Gabriela Pelinger, another leader at CPD, disagrees. She sees the goal of divestment as precisely the kind of “tangible” result Shang cites as motivation: “You can say, ‘Look at our school. Our education is profiting off of the incarceration of marginalized communities, and that directly allows us to have access to these resources.’”

President Bollinger has agreed to sit down and meet with the divestment group in April. By that time, many students will be gearing up to leave Columbia’s campus for good. But April also brings the fortieth anniversary of the apartheid divestment movement, and activists are looking forward to an event that will bring both generations of agitators together. “It does feel like we are in a kind of moment,” she says. “Hopefully that will keep building into a movement.”