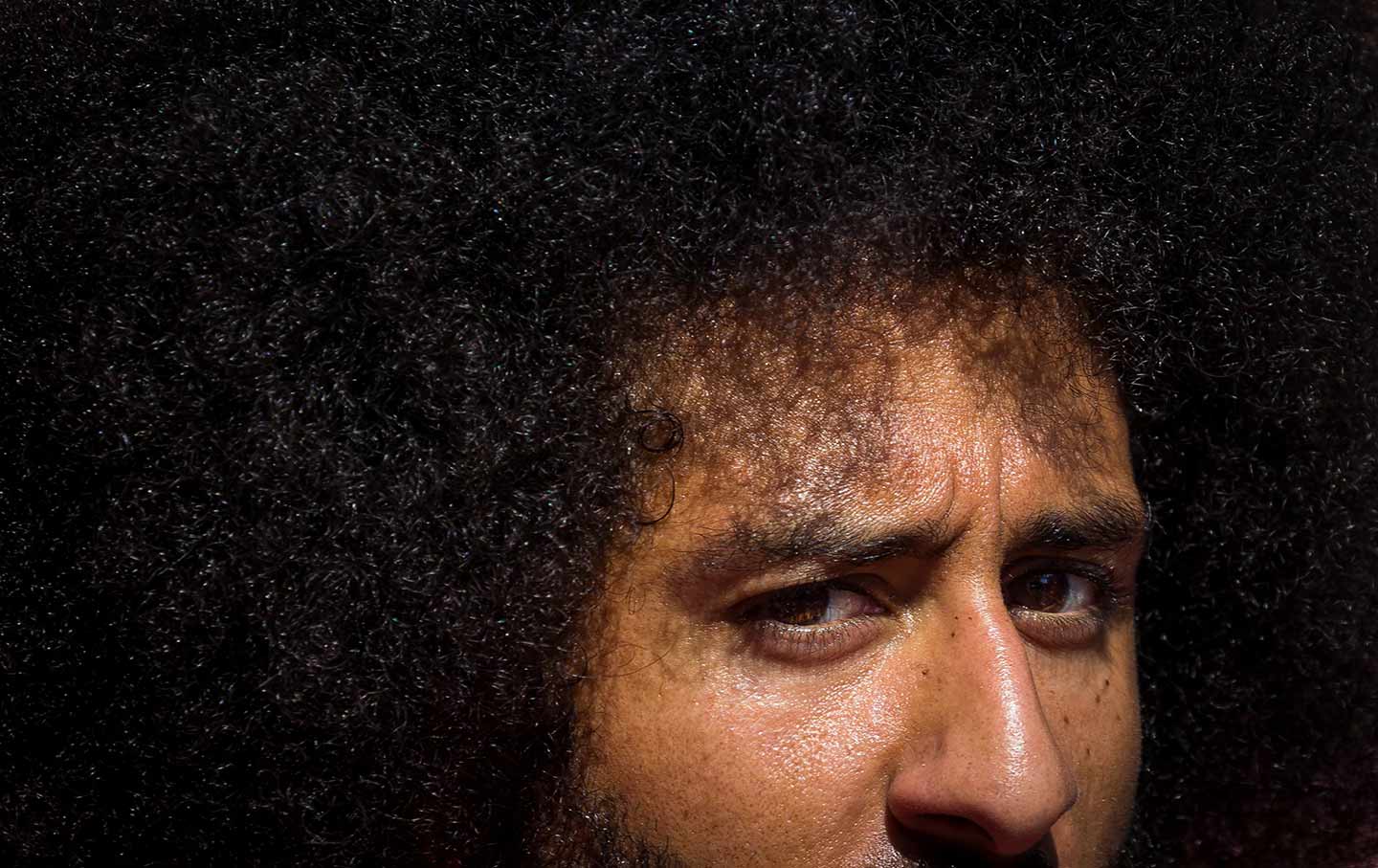 Colin Kaepernick prepares to take the field before an NFL game in Santa Clara, California, on October 23, 2016. (Reuters / Loren Elliott)

The National Football League is in the middle of a quarterback crisis. Quarterbacks are the stars: On each individual team, they are the face that runs the place. In a game where helmets consign so many players to anonymity, it’s the quarterback who gets the shine, the commercials, and the platform. They’re trusted to say nothing—and they invariably hold up their end of the bargain.

The league has attempted to protect its most valuable pieces of merchandise by outlawing any egregious contact that could place QB1 at risk. Now, unless you hit a quarterback directly at the navel and also take pains to not land with your body weight on top of him—otherwise known as “tackling”—you are destined for all kinds of penalties. Such officiating cost the Denver Broncos a game against the Chicago Bears just this past weekend. And yet this is a violent sport, and despite the best efforts of the league officials to encase quarterbacks in bubble wrap, there is no legislating contact out of the equation. This was also seen this past weekend, as future Hall of Fame quarterbacks Drew Brees and Ben Roethlisberger found themselves out for two months and the entire season, respectively, for injuries to their thumb and elbow. In addition, Jacksonville Jaguars quarterback Nick Foles is out for the season with a broken collarbone, and wear and tear has sent 2015 MVP Cam Newton to the sidelines with an undisclosed foot injury. This all happens after another Pro Bowler, Andrew Luck, retired before the start of the season. In a flukier injury, the Jets have lost their quarterback Sam Darnold to mononucleosis. People scoff at mono, but the virus, so often associated with kids, causes enlarging of the spleen, and playing tackle football with an enlarged spleen could result in death.

With each star quarterback that falls by the wayside, one question looms ever larger: Will Colin Kaepernick, after over two years in exile, finally be signed by an NFL team? Kaepernick, still only 31 years old, is, according to people I’ve spoken with who know him well, “in the best shape of his life,” waking up at 5 am for daily workouts. His agent has reportedly reached out to several of these teams in need of quarterbacks to see about getting a tryout. By signing Kaepernick, the NFL could close the book on a true instance of “cancel culture,” of denying Kaepernick his livelihood, because he dared stand up to racist police violence.

The nature of Kaepernick’s exile is so egregious that Martin Luther King III called for a boycott this week against the NFL until Kaepernick is signed. “What would change it overnight is if the public decided, ‘Okay, we’re not going to watch,’” King said to TMZ. “The industry did blackball him, which is not good. He certainly is one of the most talented quarterbacks even today, probably.”

The question now is whether the profit-oriented but deeply right-wing NFL ownership believes that Kaepernick has more value on the field or as a pariah, a cautionary tale to warn other NFL players to toe the line and never use the league’s platform to protest racism and police violence. The league entered a partnership with Jay-Z to turn the page on Kaepernick and even paid him a collusion settlement. But this chapter will never truly end as long as Kaepernick wants to play and can’t secure employment. Until this week, his value has—shamefully—been seen as that pariah, and teams have sacrificed winning to carrying out this punishment. Yet now with so many quarterbacks unable to play, it’s possible that could change.

Unfortunately, as of this writing, the Saints, Jets, and Steelers have already signed quarterbacks far less accomplished than Kaepernick to round out their rosters. The NFL has a chance to right a historic wrong and actually do the right thing. But if we know anything about this league, it would be wise for us to not hold our breath.