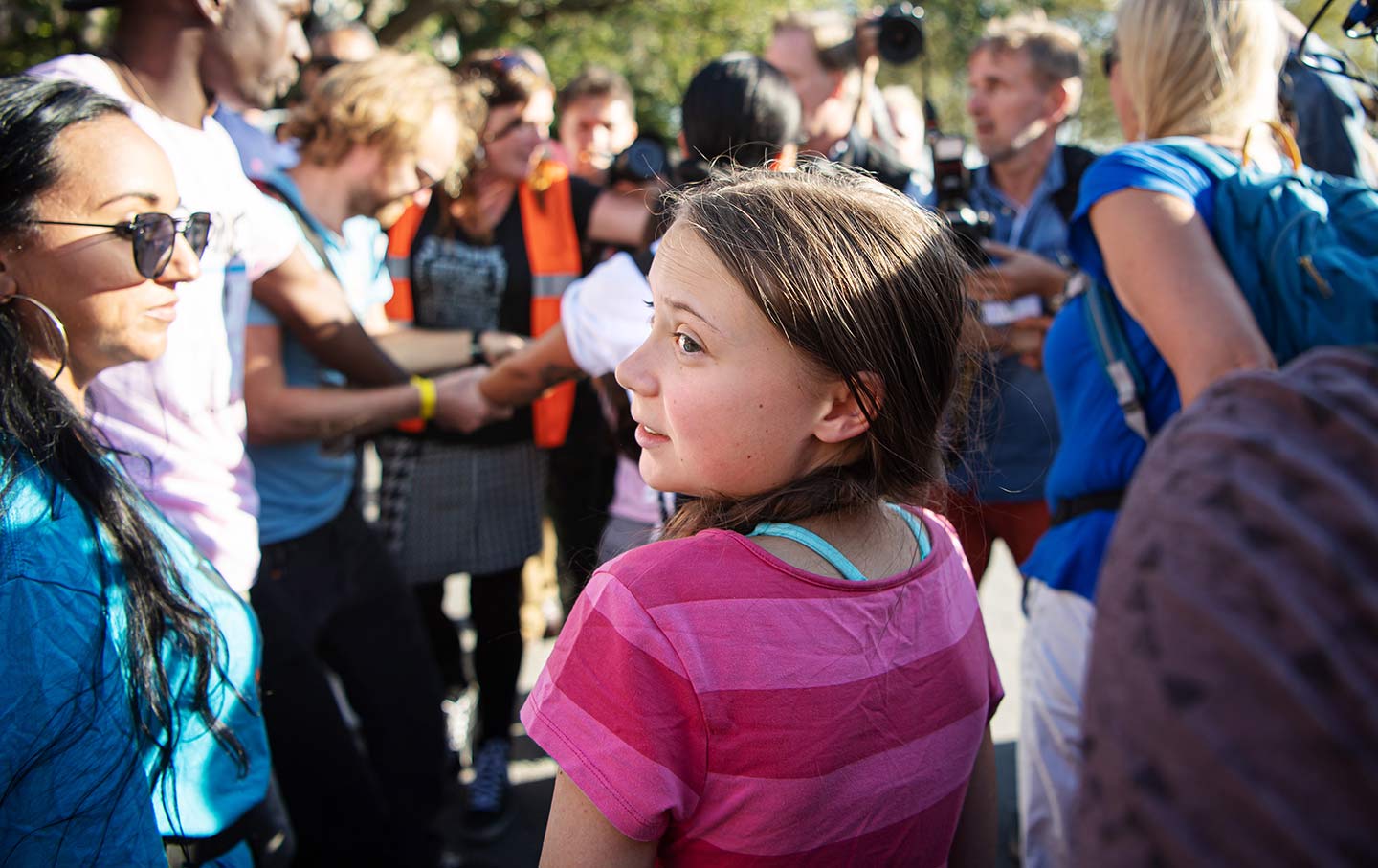 Climate activist Greta Thunberg after speaking at a rally for the Fridays for Future New York City Climate Strike on September 20. (Joel Marklund / Bildbyran via Reuters)

In August 2018 a photographer snapped a shot of a girl sitting alone outside the Swedish Parliament in Stockholm. Next to her lay a sign in Swedish that said, “School strike for climate.” The girl skipped school for three weeks and each Friday after that, heading to Parliament and handing out leaflets that read, “I am doing this because you adults are shitting on my future.”

Greta Thunberg is no longer striking alone. The climate activist, now 16 years old, was joined on September 20 by millions of others in a wave of strikes that rippled through cities and towns around the world. Enormous crowds marched and sang and chanted through the streets of Jakarta and Johannesburg, Warsaw and Brisbane, Athens and San Salvador, led mostly by kids and teenagers. The grassroots group 350.org, which supported the strikes, estimated that more than 4 million people took part globally, in 5,800 actions across 163 countries.

Photos and videos from around the world captured a mix of euphoria and grim defiance. In Kabul, Afghanistan, a group of protesters led by young women marched under the protection of armed security forces. In the Solomon Islands students waded into the rising ocean, which has already caused entire communities to relocate. In Houston hundreds of young people gathered in a torrential downpour, their city still awash in floodwater from Tropical Storm Imelda. “Our community does not have to look far to see the extent to which the climate crisis has affected and will affect our lives,” one of the teenage speakers said. “Just yesterday, we had to endure water rushing into our school through our windows.”

Nobody articulates existential dread as well as teens, or withering scorn for their elders. Both responses are fitting for the crisis. “You’ll die of old age, we’ll die of climate change,” was a common slogan at the strikes. There was plenty of Gen Z humor on display: “We took hot girl summer too far,” read one sign. Elsewhere, three punk kids in black and plaid stood with a placard reading, “I want to die but the planet doesn’t.” 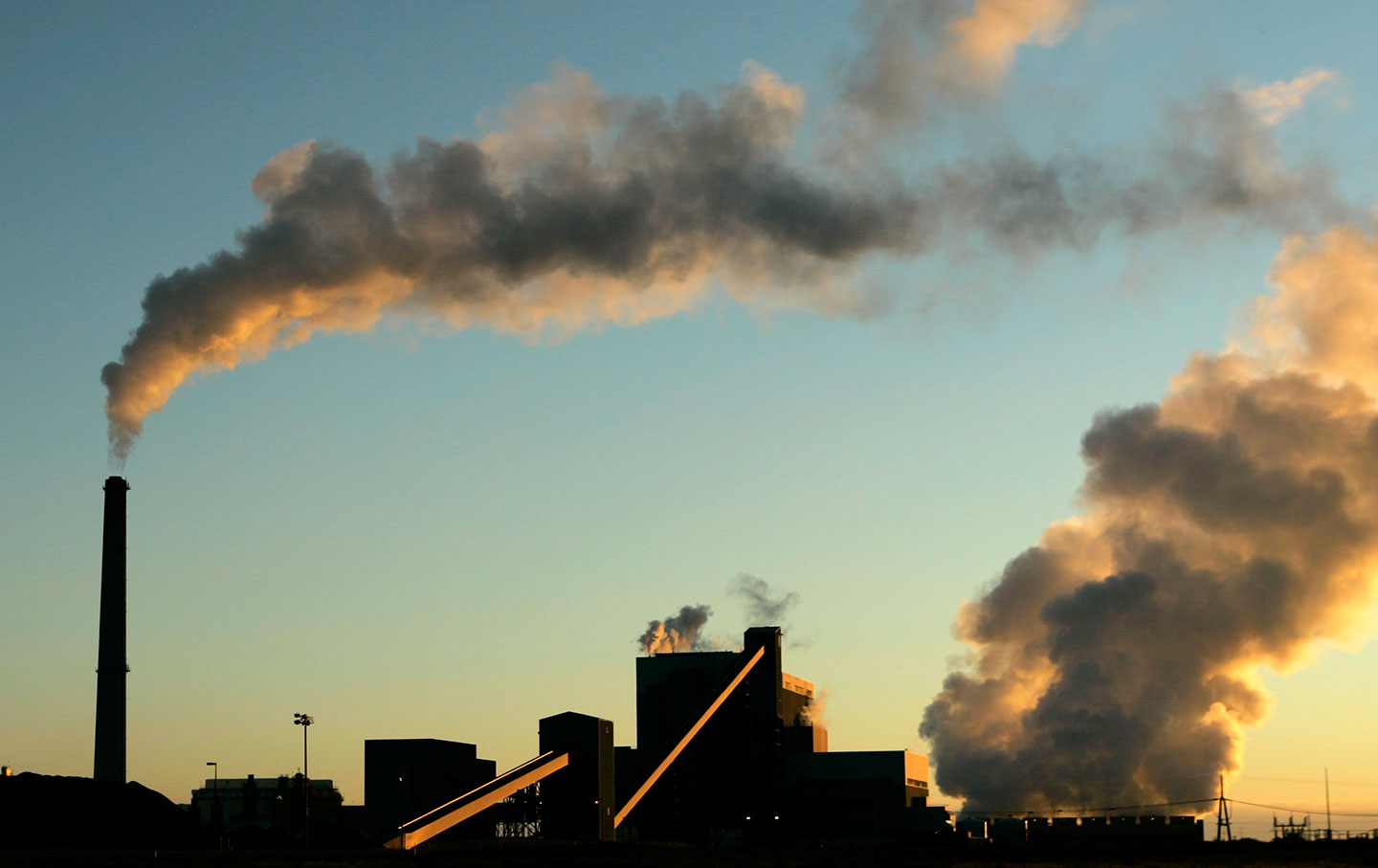 The strikes were several times larger than any previous climate action—one signal among many of the growing sense of urgency around the climate crisis. Translating urgency into political action is the next task and a more difficult one. Three days after the strikes, Thunberg chastised representatives gathered for a climate action summit at the UN General Assembly in New York for leaving it to children to lead this effort. “I should be back in school on the other side of the ocean,” Thunberg said. “Yet you all come to us young people for hope? How dare you! You have stolen my dreams and my childhood with your empty words. And yet I’m one of the lucky ones. People are suffering. People are dying. Entire ecosystems are collapsing.”

The strikes marked the beginning of a series of actions that climate activists aim to continue through 2020, with an eye not only on the US presidential election but also on the UN climate meeting in Glasgow late next year, the most crucial round of talks since the Paris Agreement was negotiated in 2015. The movement plans to target the political leaders it sees as primary barriers to change. This week the youth-led Sunrise Movement announced its first primary target in the 2020 cycle, eight-term Texas Representative Henry Cuellar, who has been called Big Oil’s favorite Democrat. Thanks to pressure from activists, nearly all of the Democratic presidential hopefuls are trying to lay claim to the title of climate candidate.

National political leaders aren’t the only power-brokers under pressure from the climate movement. Banks, asset managers, and the insurance industry underwrite the financing of fossil fuel development, as writer and activist Bill McKibben wrote recently, and activists are turning up the heat on those industries. On September 17, the divestment movement notched its latest win in the effort to choke off fossil fuel funding, when the University of California system announced it would divest its $80 billion endowment and pension fund.

The picture of Thunberg, alone, at her first school strike is a reminder of how quickly momentum can shift. The climate movement is hardly new, yet there is something palpably different now—not optimism but a kind of resolve. Thunberg does not want credit for this. What she wants is action. “Please save your praise. We don’t want it,” Thunberg said to members of Congress on September 17. “Don’t invite us here to tell us how inspiring we are without doing anything about it.”