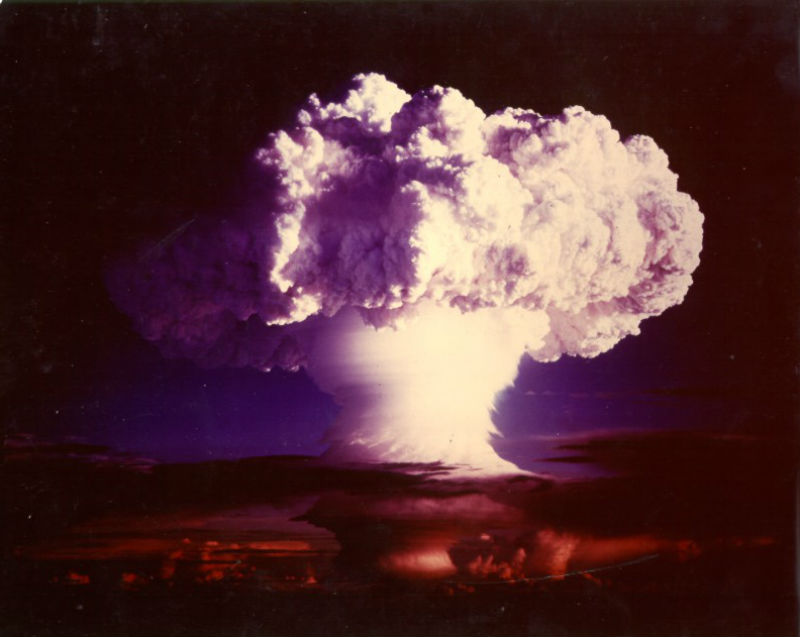 Lawyers, scholars, policy experts and others gathered at New York’s Downtown Community Television Center Wednesday evening with keen awareness that climate change isn’t the only threat hanging over the whole planet’s future. The event, organized by the Lawyers Committee on Nuclear Policy (LCNP), was meant to both honor its president emeritus, Peter Weiss, for his decades of work for nuclear disarmament, and highlight the ongoing need for such work.

Weiss was a key force behind anti-nuclear weapons submissions to the International Court of Justice, which in 1996 issued an advisory opinion ruling the threat or use of nukes broadly illegal. But in recent years, Weiss has written, “the horror is gone” from perceptions of nuclear weapons, simply because nuclear war has been avoided so far—not because the threat is gone. The US is still working on perfecting nuclear weapons, in February announcing the successful test of an improved B-61 nuclear gravity bomb, and Obama’s demands for disarmament have weakened in the face of the great power deterrence mindset.

“The nuclear weapons powers, far from taking any concrete steps in good faith,” Weiss said Wednesday, “are taking steps backwards.” As with climate change, a few large countries hold most of the potential to destroy everything, and the environmental and nuclear threats remain “the only two things that are going to end this whole adventure called life,” said Weiss’s wife, Cora, herself a veteran activist.

The two threats are linked by more than the scale of destruction they threaten. The use of even a small fraction of the world’s nuclear weapons would have devastating environmental effects, ripping through the ozone layer and plunging the planet into a sudden and extreme “nuclear winter.” As LCNP vice president Elizabeth Shafer put it on Wednesday, “What would be the point, really, if a state said, ‘We need to use nuclear weapons in order to save the state,’ whereas the escalation of nuclear weapons would cause the destruction of the whole world?”

The late Jonathan Schell, a longtime Nation contributor, made that argument powerfully, and participants on Wednesday said more voices like his and Weiss’s would be needed to fight for disarmament in the future. Public pressure was key in the lead up to the 1996 ruling, and activists are seeking to reframe the nuclear threat in terms of “human security” rather than realpolitik. Meetings in Germany and Norway in 2013, and one in Mexico in February attended by nearly 150 countries, have focused on nuclear weapons’ humanitarian toll, helping make this “the best year for nuclear disarmament in probably the last decade,” Weiss said. Many are arguing that “nuclear weapons are not only militarily useless, expensive, illegal, but they’re immoral,” said LCNP board member Jonathan Granoff. In that view, risk management arguments for nuclear weapons are irrational in the same way that “one wouldn’t say, ‘We’ll reduce slavery by 30 percent,’ because we’ve understood that it’s an immoral institution.”

Most significantly, in Weiss’s eyes, Austria will host a meeting later this year that, “in the words of the Austrian foreign minister, is going to be a ‘paradigm change’ in considering this problem.” Weiss hopes the meeting will finally begin work on a convention to completely ban nuclear weapons, as past conventions have banned biological and chemical weapons. If this work got underway, Weiss might not be above some clever ploys to promote his cause. He recalled recruiting Zimbabwe to speak at the ICJ hearings, which were proceeding in alphabetical order by country, so that the pronuclear US and UK wouldn’t have the last word. Any convention would also face P5 resistance, but Weiss’s final message on Wednesday was clear: “Despair is not an option; denial is not an option. The only option is perseverance.”